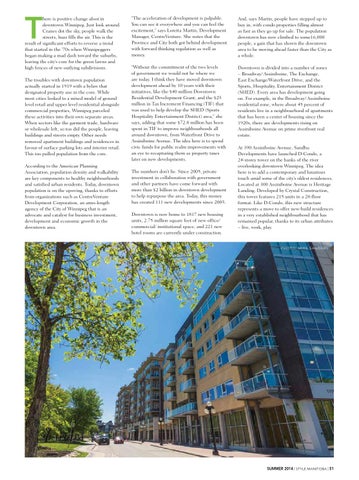 here is positive change afoot in downtown Winnipeg. Just look around. Cranes dot the sky, people walk the streets, buzz fills the air. This is the result of significant efforts to reverse a trend that started in the ‘70s when Winnipeggers began making a mad dash toward the suburbs, leaving the city’s core for the green lawns and high fences of new outlying subdivisions. The troubles with downtown population actually started in 1919 with a bylaw that designated property use in the core. While most cities looked to a mixed model of ground level retail and upper level residential alongside commercial properties, Winnipeg parceled these activities into their own separate areas. When sectors like the garment trade, hardware or wholesale left, so too did the people, leaving buildings and streets empty. Other needs removed apartment buildings and residences in favour of surface parking lots and interior retail. This too pulled population from the core. According to the American Planning Association, population density and walkability are key components to healthy neighbourhoods and satisfied urban residents. Today, downtown population is on the upswing, thanks to efforts from organizations such as CentreVenture Development Corporation, an arms-length agency of the City of Winnipeg that is an advocate and catalyst for business investment, development and economic growth in the downtown area.

“The acceleration of development is palpable. You can see it everywhere and you can feel the excitement,” says Loretta Martin, Development Manager, CentreVenture. She notes that the Province and City both got behind development with forward thinking regulation as well as money.

And, says Martin, people have stepped up to buy in, with condo properties filling almost as fast as they go up for sale. The population downtown has now climbed to some16,000 people, a gain that has shown the downtown area to be moving ahead faster than the City as a whole.

“Without the commitment of the two levels of government we would not be where we are today. I think they have moved downtown development ahead by 10 years with their initiatives, like the $40 million Downtown Residential Development Grant, and the $25 million in Tax Increment Financing (TIF) that was used to help develop the SHED (Sports Hospitality Entertainment District) area,” she says, adding that some $72.8 million has been spent in TIF to improve neighbourhoods all around downtown, from Waterfront Drive to Assiniboine Avenue. The idea here is to spend civic funds for public realm improvements with an eye to recapturing them as property taxes later on new developments.

Downtown is divided into a number of zones – Broadway/ Assiniboine, The Exchange, East Exchange/Waterfront Drive, and the Sports, Hospitality, Entertainment District (SHED). Every area has development going on. For example, in the Broadway/ Assiniboine residential zone, where about 45 percent of residents live in a neighbourhood of apartments that has been a center of housing since the 1920s, there are developments rising on Assiniboine Avenue on prime riverfront real estate.

The numbers don’t lie. Since 2005, private investment in collaboration with government and other partners have come forward with more than $2 billion in downtown development to help repurpose the area. Today, this money has created 111 new developments since 2005. Downtown is now home to 1817 new housing units, 2.75 million square feet of new office/ commercial/ institutional space, and 221 new hotel rooms are currently under construction.

At 390 Assiniboine Avenue, Sandhu Developments have launched D-Condo, a 24-storey tower on the banks of the river overlooking downtown Winnipeg. The idea here is to add a contemporary and luxurious touch amid some of the city’s oldest residences. Located at 300 Assiniboine Avenue is Heritage Landing. Developed by Crystal Construction, this tower features 215 units in a 28-floor format. Like D-Condo, this new structure represents a move to offer new-build residences in a very established neighbourhood that has remained popular, thanks to its urban attributes – live, work, play.