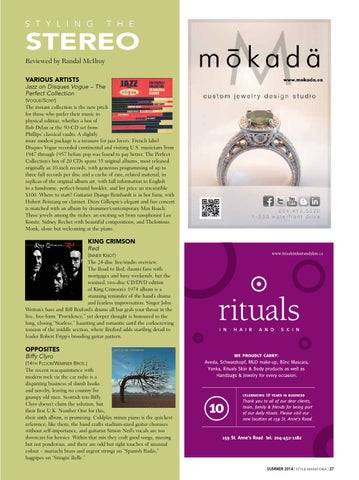 STEREO Reviewed by Randal McIlroy Various Artists Jazz on Disques Vogue – The Perfect Collection (Vogue/Sony) The instant collection is the new pitch for those who prefer their music in physical edition, whether a box of Bob Dylan or the 50-CD set from Phillips’ classical vaults. A slightly more modest package is a treasure for jazz lovers. French label Disques Vogue recorded continental and visiting U.S. musicians from 1947 through 1957 before pop was found to pay better. The Perfect Collection’s box of 20 CDs spans 35 original albums, most released originally as 10-inch records, with generous programming of up to three full records per disc and a cache of rare, related material, in replicas of the original album art, with full information in English in a handsome, perfect-bound booklet, and list price an irresistible $100. Where to start? Guitarist Django Reinhardt is in hot form, with Hubert Roistang on clarinet. Dizzy Gillespie’s elegant and fun concert is matched with an album by drummer/contemporary Max Roach. Three jewels among the riches: an exciting set from saxophonist Lee Konitz, Sidney Bechet with beautiful compositions, and Thelonious Monk, alone but welcoming at the piano.

King Crimson Red (Inner Knot) The 24-disc live/studio overview, The Road to Red, daunts fans with mortgages and busy weekends, but the remixed, two-disc CD/DVD edition of King Crimson’s 1974 album is a stunning reminder of the band’s drama and fearless improvisation. Singer John Wetton’s bass and Bill Bruford’s drums all but grab your throat in the live, free-form “Providence,” yet deeper thought is honoured in the long, closing “Starless,” haunting and romantic until the corkscrewing tension of the middle section, where Bruford adds startling detail to leader Robert Fripp’s brooding guitar pattern.

Opposites Biffy Clyro (14th Floor/Warner Bros.) The recent reacquaintance with modern rock via the car radio is a dispiriting business of dumb hooks and novelty, leaving no country for grumpy old men. Scottish trio Biffy Clyro doesn’t claim the solution, but their first U.K. Number One for this, their sixth album, is promising. Coldplay minus piano is the quickest reference; like them, the band crafts stadium-sized guitar choruses without self-importance, and guitarist Simon Neil’s vocals are too downcast for heroics. Within that mix they craft good songs, musing but not ponderous, and there are odd but right touches of unusual colour – mariachi brass and urgent strings on “Spanish Radio,” bagpipes on “Stingin’ Belle.” Summer 2014 | STYLE MANITOBA | 37