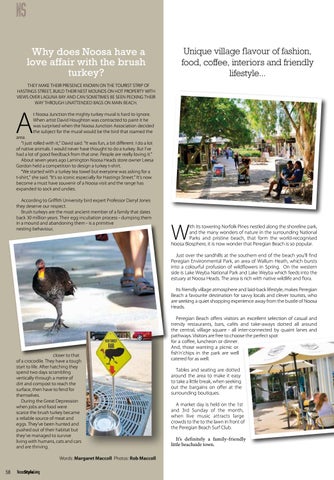 NS Why does Noosa have a love affair with the brush turkey?

THEY MAKE THEIR PRESENCE KNOWN ON THE TOURIST STRIP OF HASTINGS STREET, BUILD THEIR NEST MOUNDS ON HOT PROPERTY WITH VIEWS OVER LAGUNA BAY AND CAN SOMETIMES BE SEEN PECKING THEIR WAY THROUGH UNATTENDED BAGS ON MAIN BEACH.

t Noosa Junction the mighty turkey mural is hard to ignore. When artist David Houghton was contracted to paint it he was surprised when the Noosa Junction Association decided the subject for the mural would be the bird that roamed the

area. “I just rolled with it,” David said. “It was fun, a bit different. I do a lot of native animals. I would never have thought to do a turkey. But I’ve had a lot of good feedback from that one. People are really loving it.” About seven years ago Lamington Noosa Heads store owner Leesa Gordon held a competition to design a turkey t-shirt. “We started with a turkey tea towel but everyone was asking for a t-shirt,” she said. “It’s so iconic especially for Hastings Street.” It’s now become a must have souvenir of a Noosa visit and the range has expanded to sock and undies. According to Griffith University bird expert Professor Darryl Jones they deserve our respect. Brush turkeys are the most ancient member of a family that dates back 30 million years. Their egg incubation process - dumping them in a mound and abandoning them - is a primitive nesting behaviour,

ith its towering Norfolk Pines nestled along the shoreline park, and the many wonders of nature in the surrounding National Parks and pristine beach, that form the world-recognised Noosa Biosphere, it is now wonder that Peregian Beach is so popular. Just over the sandhills at the southern end of the beach you’ll find Peregian Environmental Park, an area of Wallum Heath, which bursts into a colourful profusion of wildflowers in Spring. On the western side is Lake Weyba National Park and Lake Weyba which feeds into the estuary at Noosa Heads. The area is rich with native wildlife and flora. Its friendly village atmosphere and laid-back lifestyle, makes Peregian Beach a favourite destination for savvy locals and clever tourists, who are seeking a quiet shopping experience away from the bustle of Noosa Heads.

closer to that of a crocodile. They have a tough start to life. After hatching they spend two days scrambling vertically through a metre of dirt and compost to reach the surface, then have to fend for themselves. During the Great Depression when jobs and food were scarce the brush turkey became a reliable source of meat and eggs. They’ve been hunted and pushed out of their habitat but they’ve managed to survive living with humans, cats and cars and are thriving. Words: Margaret Maccoll Photos: Rob Maccoll

Peregian Beach offers visitors an excellent selection of casual and trendy restaurants, bars, cafés and take-aways dotted all around the central, village square - all inter-connected by quaint lanes and pathways. Visitors are free to choose the perfect spot for a coffee, luncheon or dinner. And, those wanting a picnic or fish’n’chips in the park are well catered for as well. Tables and seating are dotted around the area to make it easy to take a little break, when seeking out the bargains on offer at the surrounding boutiques. A market day is held on the 1st and 3rd Sunday of the month, when live music attracts large crowds to the to the lawn in front of the Peregian Beach Surf Club. It’s definitely a family-friendly little beachside town. 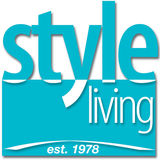