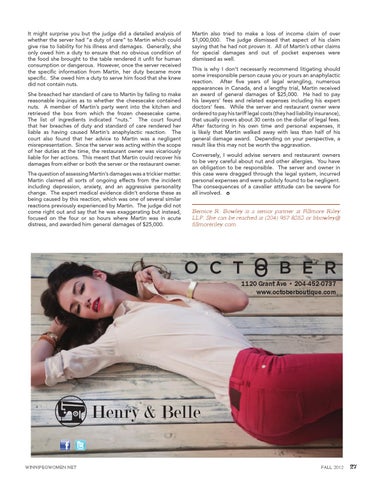 It might surprise you but the judge did a detailed analysis of whether the server had “a duty of care” to Martin which could give rise to liability for his illness and damages. Generally, she only owed him a duty to ensure that no obvious condition of the food she brought to the table rendered it unfit for human consumption or dangerous. However, once the server received the specific information from Martin, her duty became more specific. She owed him a duty to serve him food that she knew did not contain nuts. She breached her standard of care to Martin by failing to make reasonable inquiries as to whether the cheesecake contained nuts. A member of Martin’s party went into the kitchen and retrieved the box from which the frozen cheesecake came. The list of ingredients indicated “nuts.” The court found that her breaches of duty and standard of care rendered her liable as having caused Martin’s anaphylactic reaction. The court also found that her advice to Martin was a negligent misrepresentation. Since the server was acting within the scope of her duties at the time, the restaurant owner was vicariously liable for her actions. This meant that Martin could recover his damages from either or both the server or the restaurant owner. The question of assessing Martin’s damages was a trickier matter. Martin claimed all sorts of ongoing effects from the incident including depression, anxiety, and an aggressive personality change. The expert medical evidence didn’t endorse these as being caused by this reaction, which was one of several similar reactions previously experienced by Martin. The judge did not come right out and say that he was exaggerating but instead, focused on the four or so hours where Martin was in acute distress, and awarded him general damages of $25,000.

Martin also tried to make a loss of income claim of over $1,000,000. The judge dismissed that aspect of his claim saying that he had not proven it. All of Martin’s other claims for special damages and out of pocket expenses were dismissed as well. This is why I don’t necessarily recommend litigating should some irresponsible person cause you or yours an anaphylactic reaction. After five years of legal wrangling, numerous appearances in Canada, and a lengthy trial, Martin received an award of general damages of $25,000. He had to pay his lawyers’ fees and related expenses including his expert doctors’ fees. While the server and restaurant owner were ordered to pay his tariff legal costs (they had liability insurance), that usually covers about 30 cents on the dollar of legal fees. After factoring in his own time and personal expenses, it is likely that Martin walked away with less than half of his general damage award. Depending on your perspective, a result like this may not be worth the aggravation. Conversely, I would advise servers and restaurant owners to be very careful about nut and other allergies. You have an obligation to be responsible. The server and owner in this case were dragged through the legal system, incurred personal expenses and were publicly found to be negligent. The consequences of a cavalier attitude can be severe for all involved.

Bernice R. Bowley is a senior partner at Fillmore Riley LLP. She can be reached at (204) 957 8353 or bbowley@ fillmoreriley.com. 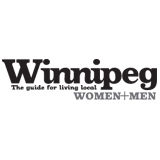 The guide for living local: Winnipeg Women and Winnipeg Men Magazines are your essential guides to everything Winnipeg–where to live, where...

The guide for living local: Winnipeg Women and Winnipeg Men Magazines are your essential guides to everything Winnipeg–where to live, where...