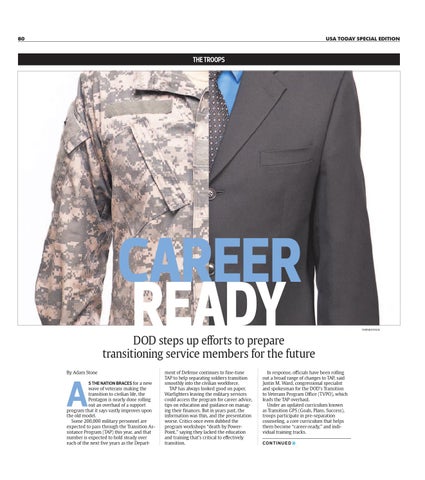 S THE NATION BRACES for a new wave of veterans making the transition to civilian life, the Pentagon is nearly done rolling out an overhaul of a support program that it says vastly improves upon the old model. Some 200,000 military personnel are expected to pass through the Transition Assistance Program (TAP) this year, and that number is expected to hold steady over each of the next five years as the Depart-

ment of Defense continues to fine-tune TAP to help separating soldiers transition smoothly into the civilian workforce. TAP has always looked good on paper. Warfighters leaving the military services could access the program for career advice, tips on education and guidance on managing their finances. But in years past, the information was thin, and the presentation worse. Critics once even dubbed the program workshops “death by PowerPoint,” saying they lacked the education and training that’s critical to effectively transition.

In response, officials have been rolling out a broad range of changes to TAP, said Justin M. Ward, congressional specialist and spokesman for the DOD’s Transition to Veterans Program Office (TVPO), which leads the TAP overhaul. Under an updated curriculum known as Transition GPS (Goals, Plans, Success), troops participate in pre-separation counseling, a core curriculum that helps them become “career-ready,” and individual training tracks. CO N T I N U E D