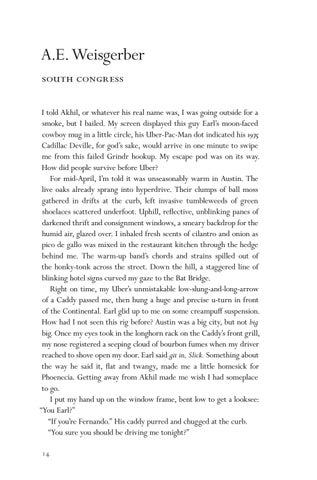 A.E. Weisgerber south congress I told Akhil, or whatever his real name was, I was going outside for a smoke, but I bailed. My screen displayed this guy Earl’s moon-faced cowboy mug in a little circle, his Uber-Pac-Man dot indicated his 1975 Cadillac Deville, for god’s sake, would arrive in one minute to swipe me from this failed Grindr hookup. My escape pod was on its way. How did people survive before Uber? For mid-April, I’m told it was unseasonably warm in Austin. The live oaks already sprang into hyperdrive. Their clumps of ball moss gathered in drifts at the curb, left invasive tumbleweeds of green shoelaces scattered underfoot. Uphill, reflective, unblinking panes of darkened thrift and consignment windows, a smeary backdrop for the humid air, glazed over. I inhaled fresh scents of cilantro and onion as pico de gallo was mixed in the restaurant kitchen through the hedge behind me. The warm-up band’s chords and strains spilled out of the honky-tonk across the street. Down the hill, a staggered line of blinking hotel signs curved my gaze to the Bat Bridge. Right on time, my Uber’s unmistakable low-slung-and-long-arrow of a Caddy passed me, then hung a huge and precise u-turn in front of the Continental. Earl glid up to me on some creampuff suspension. How had I not seen this rig before? Austin was a big city, but not big big. Once my eyes took in the longhorn rack on the Caddy’s front grill, my nose registered a seeping cloud of bourbon fumes when my driver reached to shove open my door. Earl said git in, Slick. Something about the way he said it, flat and twangy, made me a little homesick for Phoenecia. Getting away from Akhil made me wish I had someplace to go. I put my hand up on the window frame, bent low to get a looksee: “You Earl?” “If you’re Fernando.” His caddy purred and chugged at the curb. “You sure you should be driving me tonight?” 

Issue 17 features 104 pages of outstanding fiction and poetry, an essay on the unknown side of Jerome K. Jerome, and interviews with Vera Ch...

Issue 17 features 104 pages of outstanding fiction and poetry, an essay on the unknown side of Jerome K. Jerome, and interviews with Vera Ch...