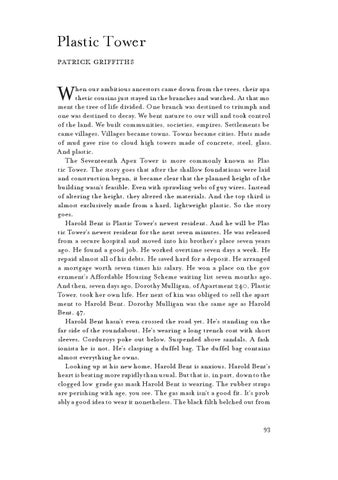 hen our ambitious ancestors came down from the trees, their apathetic cousins just stayed in the branches and watched. At that moment the tree of life divided. One branch was destined to triumph and one was destined to decay. We bent nature to our will and took control of the land. We built communities, societies, empires. Settlements became villages. Villages became towns. Towns became cities. Huts made of mud gave rise to cloud-high towers made of concrete, steel, glass. And plastic. The Seventeenth Apex Tower is more commonly known as Plastic Tower. The story goes that after the shallow foundations were laid and construction began, it became clear that the planned height of the building wasn’t feasible. Even with sprawling webs of guy wires. Instead of altering the height, they altered the materials. And the top third is almost exclusively made from a hard, lightweight plastic. So the story goes. Harold Bent is Plastic Tower’s newest resident. And he will be Plastic Tower’s newest resident for the next seven minutes. He was released from a secure hospital and moved into his brother’s place seven years ago. He found a good job. He worked overtime seven days a week. He repaid almost all of his debts. He saved hard for a deposit. He arranged a mortgage worth seven times his salary. He won a place on the government’s Affordable Housing Scheme waiting list seven months ago. And then, seven days ago, Dorothy Mulligan, of Apartment 240, Plastic Tower, took her own life. Her next of kin was obliged to sell the apartment to Harold Bent. Dorothy Mulligan was the same age as Harold Bent. 47. Harold Bent hasn’t even crossed the road yet. He’s standing on the far side of the roundabout. He’s wearing a long trench coat with short sleeves. Corduroys poke out below. Suspended above sandals. A fashionista he is not. He’s clasping a duffel bag. The duffel bag contains almost everything he owns. Looking up at his new home, Harold Bent is anxious. Harold Bent’s heart is beating more rapidly than usual. But that is, in part, down to the clogged low-grade gas mask Harold Bent is wearing. The rubber straps are perishing with age, you see. The gas mask isn’t a good fit. It’s probably a good idea to wear it nonetheless. The black filth belched out from

Issue 11 features 11 short stories, 12 (or 16, depending on how you count) poems, two essay features, and an interview with the co-founder o...

Issue 11 features 11 short stories, 12 (or 16, depending on how you count) poems, two essay features, and an interview with the co-founder o...