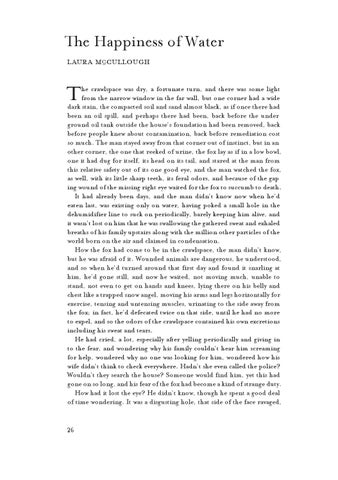 he crawlspace was dry, a fortunate turn, and there was some light from the narrow window in the far wall, but one corner had a wide dark stain, the compacted soil and sand almost black, as if once there had been an oil spill, and perhaps there had been, back before the underground oil tank outside the house’s foundation had been removed, back before people knew about contamination, back before remediation cost so much. The man stayed away from that corner out of instinct, but in another corner, the one that reeked of urine, the fox lay as if in a low bowl, one it had dug for itself, its head on its tail, and stared at the man from this relative safety out of its one good eye, and the man watched the fox, as well, with its little sharp teeth, its feral odors, and because of the gaping wound of the missing right eye waited for the fox to succumb to death. It had already been days, and the man didn’t know now when he’d eaten last, was existing only on water, having poked a small hole in the dehumidifier line to suck on periodically, barely keeping him alive, and it wasn’t lost on him that he was swallowing the gathered sweat and exhaled breaths of his family upstairs along with the million other particles of the world born on the air and claimed in condensation. How the fox had come to be in the crawlspace, the man didn’t know, but he was afraid of it. Wounded animals are dangerous, he understood, and so when he’d turned around that first day and found it snarling at him, he’d gone still, and now he waited, not moving much, unable to stand, not even to get on hands and knees, lying there on his belly and chest like a trapped snow angel, moving his arms and legs horizontally for exercise, tensing and untensing muscles, urinating to the side away from the fox; in fact, he’d defecated twice on that side, until he had no more to expel, and so the odors of the crawlspace contained his own excretions including his sweat and tears. He had cried, a lot, especially after yelling periodically and giving in to the fear, and wondering why his family couldn’t hear him screaming for help, wondered why no one was looking for him, wondered how his wife didn’t think to check everywhere. Hadn’t she even called the police? Wouldn’t they search the house? Someone would find him, yet this had gone on so long, and his fear of the fox had become a kind of strange duty. How had it lost the eye? He didn’t know, though he spent a good deal of time wondering. It was a disgusting hole, that side of the face ravaged,

Our tenth issue features—by accident, honestly—ten short stories, ten poems, two interviews (author Evie Wyld and poet/translator/author/editor David Constantine) and an essay about book addiction in the family. It was released on the 10th of August. 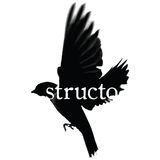