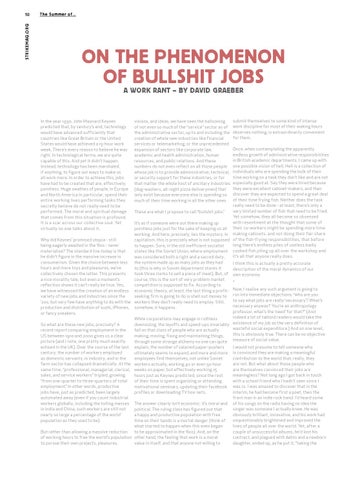 In the year 1930, John Maynard Keynes predicted that, by century’s end, technology would have advanced sufficiently that countries like Great Britain or the United States would have achieved a 15-hour work week. There’s every reason to believe he was right. In technological terms, we are quite capable of this. And yet it didn’t happen. Instead, technology has been marshaled, if anything, to figure out ways to make us all work more. In order to achieve this, jobs have had to be created that are, effectively, pointless. Huge swathes of people, in Europe and North America in particular, spend their entire working lives performing tasks they secretly believe do not really need to be performed. The moral and spiritual damage that comes from this situation is profound. It is a scar across our collective soul. Yet virtually no one talks about it.

visions, and ideas, we have seen the ballooning of not even so much of the “service” sector as of the administrative sector, up to and including the creation of whole new industries like financial services or telemarketing, or the unprecedented expansion of sectors like corporate law, academic and health administration, human resources, and public relations. And these numbers do not even reflect on all those people whose job is to provide administrative, technical, or security support for these industries, or for that matter the whole host of ancillary industries (dog-washers, all-night pizza deliverymen) that only exist because everyone else is spending so much of their time working in all the other ones.

submit themselves to some kind of intense work discipline for most of their waking hours deserves nothing, is extraordinarily convenient for them.

Once, when contemplating the apparently endless growth of administrative responsibilities in British academic departments, I came up with one possible vision of hell. Hell is a collection of individuals who are spending the bulk of their time working on a task they don’t like and are not especially good at. Say they were hired because they were excellent cabinet-makers, and then discover they are expected to spend a great deal of their time frying fish. Neither does the task really need to be done - at least, there’s only a very limited number of fish that need to be fried. These are what I propose to call “bullshit jobs.” Yet somehow, they all become so obsessed with resentment at the thought that some of It’s as if someone were out there making up pointless jobs just for the sake of keeping us all their co-workers might be spending more time working. And here, precisely, lies the mystery. In making cabinets, and not doing their fair share Why did Keynes’ promised utopia - still capitalism, this is precisely what is not supposed of the fish-frying responsibilities, that before long there’s endless piles of useless badly being eagerly awaited in the ‘60s - never to happen. Sure, in the old inefficient socialist materialise? The standard line today is that states like the Soviet Union, where employment cooked fish piling up all over the workshop and it’s all that anyone really does. he didn’t figure in the massive increase in was considered both a right and a sacred duty, consumerism. Given the choice between less the system made up as many jobs as they had I think this is actually a pretty accurate hours and more toys and pleasures, we’ve to (this is why in Soviet department stores it description of the moral dynamics of our collectively chosen the latter. This presents took three clerks to sell a piece of meat). But, of own economy. a nice morality tale, but even a moment’s course, this is the sort of very problem market * reflection shows it can’t really be true. Yes, competition is supposed to fix. According to we have witnessed the creation of an endless economic theory, at least, the last thing a profit- Now, I realise any such argument is going to variety of new jobs and industries since the seeking firm is going to do is shell out money to run into immediate objections: “who are you to say what jobs are really ‘necessary’? What’s ‘20s, but very few have anything to do with the workers they don’t really need to employ. Still, necessary anyway? You’re an anthropology production and distribution of sushi, iPhones, somehow, it happens. professor, what’s the ‘need’ for that?” (And or fancy sneakers. indeed a lot of tabloid readers would take the While corporations may engage in ruthless So what are these new jobs, precisely? A downsizing, the layoffs and speed-ups invariably existence of my job as the very definition of wasteful social expenditure.) And on one level, recent report comparing employment in the fall on that class of people who are actually this is obviously true. There can be no objective US between 1910 and 2000 gives us a clear making, moving, fixing and maintaining things; picture (and I note, one pretty much exactly through some strange alchemy no one can quite measure of social value. I would not presume to tell someone who echoed in the UK). Over the course of the last explain, the number of salaried paper-pushers century, the number of workers employed ultimately seems to expand, and more and more is convinced they are making a meaningful contribution to the world that, really, they as domestic servants, in industry, and in the employees find themselves, not unlike Soviet are not. But what about those people who farm sector has collapsed dramatically. At the workers actually, working 40 or even 50 hour are themselves convinced their jobs are same time, “professional, managerial, clerical, weeks on paper, but effectively working 15 meaningless? Not long ago I got back in touch sales, and service workers” tripled, growing hours just as Keynes predicted, since the rest with a school friend who I hadn’t seen since I “from one-quarter to three-quarters of total of their time is spent organizing or attending employment.” In other words, productive motivational seminars, updating their facebook was 12. I was amazed to discover that in the interim, he had become first a poet, then the jobs have, just as predicted, been largely profiles or downloading TV box-sets. front man in an indie rock band. I’d heard some automated away (even if you count industrial workers globally, including the toiling masses The answer clearly isn’t economic: it’s moral and of his songs on the radio having no idea the singer was someone I actually knew. He was in India and China, such workers are still not political. The ruling class has figured out that obviously brilliant, innovative, and his work had nearly so large a percentage of the world’ a happy and productive population with free unquestionably brightened and improved the population as they used to be). time on their hands is a mortal danger (think of lives of people all over the world. Yet, after a what started to happen when this even began couple of unsuccessful albums, he’d lost his But rather than allowing a massive reduction to be approximated in the ‘60s). And, on the contract, and plagued with debts and a newborn of working hours to free the world’s population other hand, the feeling that work is a moral daughter, ended up, as he put it, “taking the to pursue their own projects, pleasures, value in itself, and that anyone not willing to 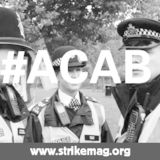 The Summer of... What will you make of it? A summer of possibilities, featuring: David Graeber – Jaroslav Hasek - Danny Dorling - Margaret...

The Summer of... What will you make of it? A summer of possibilities, featuring: David Graeber – Jaroslav Hasek - Danny Dorling - Margaret...