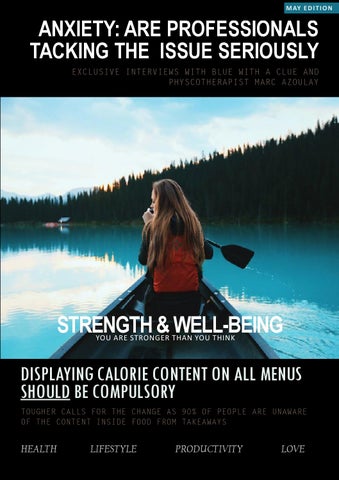 EXCLUSIVE INTERVIEWS WITH BLUE WITH A CLUE AND PHYSCOTHERAPIST MARC AZOULAY

STRENGTH & WELL-BEING YOU ARE STRONGER THAN YOU THINK

MAY EDITION STRENGTH AND WELL-BEING

MAY EDITION STRENGTH AND WELL-BEING

Are professionals doing enough to help sufferers of anxiety? Generalized anxiety disorders affect almost everyone at some stage in their life, but how successful is the current treatment for anxiety being and does the system need changing? Jessica Maguire finds out.

sk someone if they have suffered from anxiety and the answer is likely ‘yes’. Anxiety is defined as ‘a feeling of unease, such as worry or fear that can be mild or severe’ and it’s not uncommon in this country. According to the Mental Health Foundation, in 2013 there were 8.2 million cases of anxiety in the UK. The current treatment for the illness is cognitive behavioural therapy (CBT), which involves seeing a therapist or counsellor, as it is a form of talking therapy that aims to help manage problems by changing the way you think and behave. It sounds fairly constructive, but often the reality is that waiting times to see a specialist can be lengthy and this can be disheartening and for someone with anxiety that requires help immediately. Combined with CBT is prescription medication such as beta-blockers which aim to reduce the physical symptoms of anxiety such as rapid heart-rate, dizziness and shaking. In a survey conducted by Strength and Well-being, it revealed that a staggering 100% of participants wanted to see changes in the way

anxiety is dealt with by professionals and that 60% of people would rate the service they received by specialists as unsatisfactory. Having experienced the illness first-hand myself, I am aware that anxiety is a very personal thing to each sufferer and it can be very complex to understand as everyone has a different trigger. My fear is that doctors are not putting enough time into dealing with the root cause of anxiety for the in-

health issues from people who have suffered with mental health illnesses and are coping or overcome it. The aim of the website is that the advice provided will be more realistic and more helpful. Amber Aspinall, founder of Blue With A Clue, believes that meeting the needs of the individual plays a crucial role in dealing with anxiety and tells us about her own experience when she visited a doctor. “My experience of CBT with a therapist

“I didn’t feel as though I was being seen as my own person.” dividual and are more focused on ‘saving time’ by treating the illness as it is one singular issue, and I am not alone when in suggesting that adjustments need to be made to the way professionals deal with cases of anxiety and its treatment. Blue With A Clue is a platform set up as a reaction to the current treatment by mental health professionals as it is operated entirely from people who have suffered from anxiety in some form. The thinking behind this to give real-life advice for people with mental

wasn’t particularly positive. CBT is about focusing on the here and now, but the therapist I was seeing completely disregarded my past traumatic experiences that contributed to my anxiety. “I didn’t feel as though I was being seen as my own person.” She also said that changes to the way anxiety is currently dealt with by professionals could prove to be crucial to an individual’s recovery “I feel that prolonged support would make a huge difference to people suffering from anxiety.

“It isn’t a case of just taking medication or completing a number of counselling sessions and the anxiety melting away. Even with something like CBT, it can be easy to forget to use those techniques once the sessions have stopped. “Having someone to talk your worries through with can help an awful lot, whether that’s in person or online. It’s not always easy to rationalise your own worries.” We also spoke to sufferer of generalized anxiety, Keira Rae who told us that at times her anxiety is severe to the point

she was digging up old graves that I wonder may have actually contributed to some of my anxiety at the time.” Keira also voiced her concern of the lengthy waiting times it takes to see a professional, she was made to wait six months before she saw a professional and felt at a loss. “I was very surprised and a bit at a loss as I began wondering about the availability of other clinics or if there even were other clinics in my local area.

“I’ve seen plenty of clients that get addicted to benzodiazepines which are commonly prescribed for anxiety. These drugs can be a nightmare to get off of and they have lasting effects on the body and the brain.” “I think that overall as a profession we are doing an ok job. Of course there are bad therapists and good therapists but for the most part I think that anxiety is fairly well understood.

“I’ve seen plenty of clients that get addicted to benzodiazepines which are commonly prescribed for anxiety.” that she feels she is unable to go anywhere or do anything but also, it gradually disappears for weeks. She told us that her previous therapist did not acknowledge vital parts of her past that contributed to her anxiety at the time. “My previous therapist continued to emphasize how my past was the reason for all the anxiety rather than paying any attention to local events that were happening at the time. “She also seemed to ‘take sides’ rather than helping me come to terms with issues I have had in the past. In a way, I felt that she was inadvertently fuelling my anger at certain situations and people in her belief that this was ‘releasing pent up frustration’ without realizing that these were emotions that I had already acknowledged and dealt with. “In a way,

Fortunately there were other clinics near me, so I called them and most of them actually were full or were difficult to reach as they had an automated answering machine that filtered calls to nowhere.” Marc Azoulay has been a psychotherapist for three years and specializes in working with addictions and trauma and has his own private practice. He said the most effective way in treating anxiety for him is to “see where the root cause is and act accordingly”. Azoulay also mentioned that he has witnessed patients become dependent on prescription medication and the long-lasting effects on the individual can prove to be devastating. He said, “Medication is a helpful tool but is not a solution. It can help someone to become functional enough to start to make the life changes and do the deeper work required to manage their anxiety.

“We, as a society, need to work to reduce the demands and judgements that we put on each other and work to normalize the experience of anxiety. Too many clients feel alone in their condition, this is a shame since anxiety is very common, we could be creating healing communities but instead we push each other away.” Strength and Well-being Blog - May Edition

Strength and Well-being Blog - May Edition