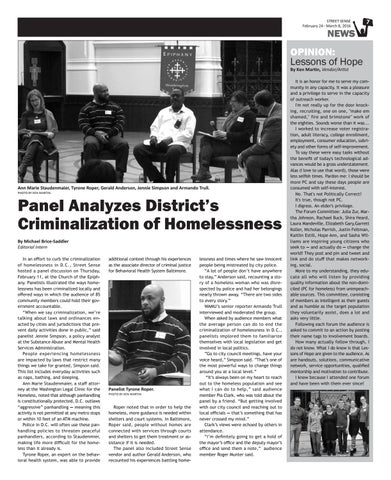 Panel Analyzes District’s Criminalization of Homelessness By Michael Brice-Saddler Editorial Intern In an effort to curb the criminalization of homelessness in D.C., Street Sense hosted a panel discussion on Thursday, February 11, at the Church of the Epiphany. Panelists illustrated the ways homelessness has been criminalized locally and offered ways in which the audience of 85 community members could hold their government accountable. “When we say criminalization, we’re talking about laws and ordinances enacted by cities and jurisdictions that prevent daily activities done in public,” said panelist Jennie Simpson, a policy analyst at the Substance Abuse and Mental Health Services Administration. People experiencing homelessness are impacted by laws that restrict many things we take for granted, Simpson said. This list includes everyday activities such as naps, bathing, and sleeping. Ann Marie Staudenmaier, a staff attorney at the Washington Legal Clinic for the Homeless, noted that although panhandling is constitutionally protected, D.C. outlaws “aggressive” panhandling — meaning this activity is not permitted at any metro stops or within 10 feet of an ATM machine. Police in D.C. will often use these panhandling policies to threaten peaceful panhandlers, according to Staudenmier, making life more difficult for the homeless than it already is. Tyrone Roper, an expert on the behavioral health system, was able to provide

additional context through his experiences as the associate director of criminal justice for Behavioral Health System Baltimore.

Roper noted that in order to help the homeless, more guidance is needed within shelters and court systems. In Baltimore, Roper said, people without homes are connected with services through courts and shelters to get them treatment or assistance if it is needed. The panel also included Street Sense vendor and author Gerald Anderson, who recounted his experiences battling home-

lessness and times where he saw innocent people being mistreated by city police. “A lot of people don’t have anywhere to stay,” Anderson said, recounting a story of a homeless woman who was disrespected by police and had her belongings nearly thrown away. “There are two sides to every story.” WAMU’s senior reporter Armando Trull interviewed and moderated the group. When asked by audience members what the average person can do to end the criminalization of homelessness in D.C., panelists implored them to familiarize themselves with local legislation and get involved in local politics. ”Go to city council meetings, have your voice heard,” Simpson said. ”That’s one of the most powerful ways to change things around you at a local level.” “It’s always been on my heart to reach out to the homeless population and see what I can do to help,” said audience member Pia Clark, who was told about the panel by a friend. “But getting involved with our city council and reaching out to local officials — that’s something that has never crossed my mind.” Clark’s views were echoed by others in attendance. “I’m definitely going to get a hold of the mayor’s office and the deputy mayor’s office and send them a note,” audience member Roger Munter said.

It is an honor for me to serve my community in any capacity. It was a pleasure and a privilege to serve in the capacity of outreach worker. I'm not really up for the door knocking, recruiting, one on one, "make em shamed," fire and brimstone" work of the eighties. Sounds worse than it was... I worked to increase voter registration, adult literacy, college enrollment, employment, consumer education, sobriety and other forms of self-improvement. To say these were easy tasks without the benefit of today's technological advances would be a gross understatement. Alas (I love to use that word), those were less selfish times. Pardon me: I should be more PC and say these days people are consumed with self-interest. No. That's not Politically Correct! It's true, though not PC. I digress. An elder's privilege. The Forum Committee: Julia Zur, Martha Johnson, Rachael Buck, Shira Heard, Laura Mandeville, Elizabeth Gary,Garrett Koller, Nicholas Parrish, Justin Feltman, Kaitlin Estill, Hope Ann, and Sasha Williams are inspiring young citizens who seek to — and actually do — change the world! They post and pin and tweet and link and do stuff that makes networking, social. More to my understanding, they educate all who will listen by providing quality information about the non-domiciled (PC for homeless) from unimpeachable sources. This committee, consisting of members as intelligent as their guests and as humble as the target population they voluntarily assist, does a lot and asks very little. Following each forum the audience is asked to commit to an action by posting their name tags to involvement boards. How many actually follow through, I do not know. What I do know is that Lessons of Hope are given to the audience. As are handouts, solutions, communicative network, service opportunities, qualified mentorship and motivation to contribute. I know because I attended one forum and have been with them ever since! 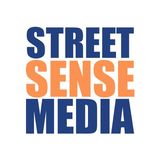