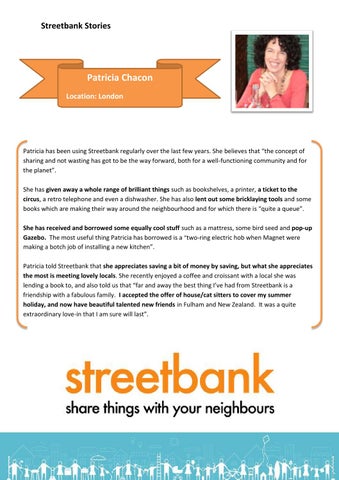 Patricia has been using Streetbank regularly over the last few years. She believes that “the concept of sharing and not wasting has got to be the way forward, both for a well-functioning community and for the planet”. She has given away a whole range of brilliant things such as bookshelves, a printer, a ticket to the circus, a retro telephone and even a dishwasher. She has also lent out some bricklaying tools and some books which are making their way around the neighbourhood and for which there is “quite a queue”. She has received and borrowed some equally cool stuff such as a mattress, some bird seed and pop-up Gazebo. The most useful thing Patricia has borrowed is a “two-ring electric hob when Magnet were making a botch job of installing a new kitchen”. Patricia told Streetbank that she appreciates saving a bit of money by saving, but what she appreciates the most is meeting lovely locals. She recently enjoyed a coffee and croissant with a local she was lending a book to, and also told us that “far and away the best thing I’ve had from Streetbank is a friendship with a fabulous family. I accepted the offer of house/cat sitters to cover my summer holiday, and now have beautiful talented new friends in Fulham and New Zealand. It was a quite extraordinary love-in that I am sure will last”. 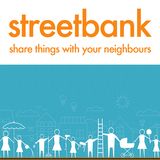