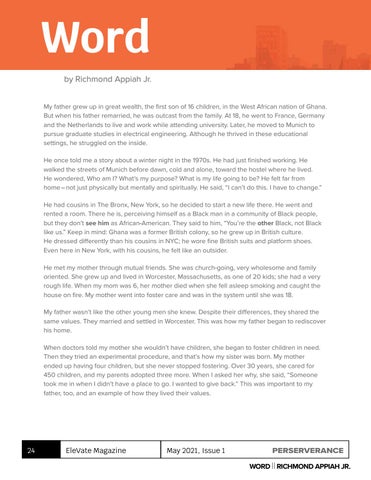 My father grew up in great wealth, the first son of 16 children, in the West African nation of Ghana. But when his father remarried, he was outcast from the family. At 18, he went to France, Germany and the Netherlands to live and work while attending university. Later, he moved to Munich to pursue graduate studies in electrical engineering. Although he thrived in these educational settings, he struggled on the inside. He once told me a story about a winter night in the 1970s. He had just finished working. He walked the streets of Munich before dawn, cold and alone, toward the hostel where he lived. He wondered, Who am I? What’s my purpose? What is my life going to be? He felt far from home – not just physically but mentally and spiritually. He said, “I can’t do this. I have to change.” He had cousins in The Bronx, New York, so he decided to start a new life there. He went and rented a room. There he is, perceiving himself as a Black man in a community of Black people, but they don’t see him as African-American. They said to him, “You’re the other Black, not Black like us.” Keep in mind: Ghana was a former British colony, so he grew up in British culture. He dressed differently than his cousins in NYC; he wore fine British suits and platform shoes. Even here in New York, with his cousins, he felt like an outsider. He met my mother through mutual friends. She was church-going, very wholesome and family oriented. She grew up and lived in Worcester, Massachusetts, as one of 20 kids; she had a very rough life. When my mom was 6, her mother died when she fell asleep smoking and caught the house on fire. My mother went into foster care and was in the system until she was 18. My father wasn’t like the other young men she knew. Despite their differences, they shared the same values. They married and settled in Worcester. This was how my father began to rediscover his home. When doctors told my mother she wouldn’t have children, she began to foster children in need. Then they tried an experimental procedure, and that’s how my sister was born. My mother ended up having four children, but she never stopped fostering. Over 30 years, she cared for 450 children, and my parents adopted three more. When I asked her why, she said, “Someone took me in when I didn’t have a place to go. I wanted to give back.” This was important to my father, too, and an example of how they lived their values.

My father trained as a mechanical engineer but worked wherever he could: in a paper factory, a steel manufacturing plant, even as a handyman. He faced tremendous racism and xenophobia as he wasn’t just a Black man but a foreigner. People put a hammer through his windshield and slashed his tires. When I asked him how he dealt with that, he said, “I didn’t focus on it. I was spiritually strong. I knew what I had to do for my family.” There were financial struggles we kids were not aware of. We didn’t have everything, but we had what we needed. My dad worked 70 to 100 hours a week. But every Sunday, he took the day off, and the family went to church and spent the day together. Perseverance, to me, is exemplified by my father’s journey from that night in Munich until the life he found with my mother and with his family. Despite struggles and hardships, it was a life in which he was clear about who he was and what mattered to him. He understood the gratification that waits for you when you struggle on your path to finding meaning. Your name, he said – knowing what you stand for and what you believe in – is worth more than your riches.

Richmond Appiah Jr. is a Street2Ivy Inc. co-founder, and co-founder and managing principal of Street2Ivy’s commercial initiative, Street Two Realty. He is responsible for all property management operations, and its New England portfolio of residential and commercial properties.

Street2Ivy co-founder Richmond Appiah Jr. on his father's journey from Ghana to Worcester, Massachusetts, and how his internal journey exemplifies ELEVATE Issue 1's theme of "Perseverance." From Street2Ivy's ELEVATE Magazine, Issue 1 (May, 2021) https://www.street2ivy.com/pages/elevate-magazine 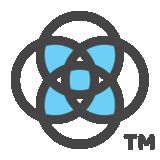