BettaKultcha at the Corn Exchange 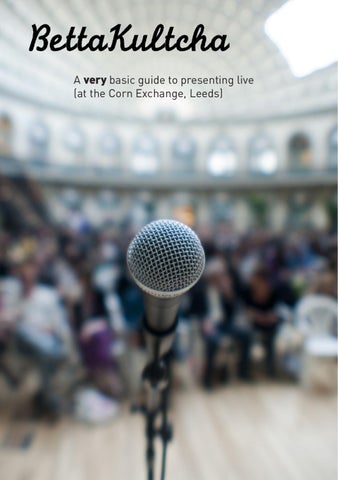 A very basic guide to presenting live (at the Corn Exchange, Leeds)

No one gets a corner office In part, this building’s impact stems from its astonishing surface exuberance: West Yorkshire millstone grit persuaded into swags of East Yorkshire flora. And of course there’s the breathtakingly modern span of the 150-year-old roof. In the words of the Architect journal at the time of its opening, “a work of original genius and thorough practical utility.” Above all, however, Cuthbert Brodrick’s Corn Exchange delivers flexibility through simplicity. On its wide open floor, grain sellers set out their stalls according to the rules and bylaws of the market, “shewing, exhibiting, soliciting and touting”. Around the edge, 59 doors are ranged in egalitarian fashion. In an oval building, no one gets a corner office. Such is the architecture of a lightning presentation evening. Every speaker holds the floor for their allotted five minutes. A score of screens march past, 15 paces apart. Everyone is welcome, if they stick to the rules, with no exceptions, no special privileges. But magic can happen in this rigid structure. Sometimes it’s the shock of a true life story, sometimes the beguiling appeal of a secret passion, or a sideways look, or a new pet theory. Once they sold corn here; now we trade in stories. Matt Edgar spoke at the first BettaKultcha in Leeds’ Tower Works. He returned and again orated to the audience at and about the Corn Exchange. On twitter he’s @mattedgar

Best tip or advice to someone considering presenting at BK?

Be yourself – let your personality come through

allow time for the audience to laugh

Speak about your passions and let that shine through. remember that the people in the audience want you to do well

Have an emphatic final phrase and use it.

Keep your words for the talk, not the slides

resist the urge to turn around

Would you do it all over again

Definitely - I’d love to bring the vital message of correct apostrophe to the BK crowd!

I am! It’s good, random fun – give it a go! Yes, definitely. Giving yourself a good scare is good for your health, and great fun. There are far too many people stuck in their comfort zone, this gets you out of it and gives it a good dust down.

If I came up with another good idea for a topic I’d definitely do it again, I just feel I should give other people a chance first!

Definitely as often as Richard and Ivor will have me!

Your favourite breakfast cereal: They haven’t invented it yet. I usually have a slice of toast made with home baked bread. Your first and last record bought: I’m not sure but I think the first record I bought was Led Zeppelin II. The last record I bought for myself was possibly a St. Germain cd (and very good it was too). Your Favourite BK moment... Ooo, that’s a tough one. From a personal perspective I think it was when myself and Richard came down the stairs from the balcony in the Corn Exchange followed by a spotlight. It summed up everything about the progress of BK up to that point: we were in the huge space of the Corn Exchange for the very first time, we were improvising with what was available in the space and it was an ironic piss-take of the traditional show format – delicious. From the perspective of the event and the presenters, I think it has to be the fall out from the ‘Stylus incident’. The fact that the audience cared about the event and were prepared to resolve the issue amongst themselves made me proud beyond imaginings... What do you really think of your coconspirator? (Don’t worry, I won’t tell...) People don’t realise that Richard and I collaborated on the project idea after about thirty minutes of meeting each other for the first time. I hadn’t a clue what he was like as a person. As it happens, he proved to be reliable which is the biggest asset anyone can possess. He is also completely different to me which probably helps to keep the BK format unpredictable. Someone once said to me that if either of us had tried to organise the event on our own, it would have quickly become ‘knowable.’ But because we are in some ways opposites, the results are ‘unknowable’ and people can’t figure out where we are coming from exactly. And having different skills from each other is a big help too.

an (in-depth, Smash-Hits style, interview with BettaKultcha’s creators in which you get to...

“Keynote is better than Powerpoint; just.” After global domination - what next? ‘Be here now’ is my motto. We’re enjoying the ride hugely at the moment but inevitably we keep asking ourselves, “what if..?” We’re considering festivals and school workshops for the future but let’s face it, world domination is a long way off... (How) Is BK better than a night in watching ‘Dave’ ? Don’t get me started on the list of positives that BK generates. I seriously believe that BK is a social phenomenon that has massive implications for the future of conferences and personal development... BK is the real thing, everything else is just television. @ivortymcak Jon’s thanks to... Emma (she gave ME the push), all the speakers, Edward, Mike, Angela, Rich, Larner, Lee, Gemma, Tom

“I love Ivor with all my heart! What did you expect me to say?” Your favourite breakfast cereal: Breakfast? What’s breakfast? If a strong black coffee counts them that’s breakfast. Your first and last record bought: My first record was 19 by Paul Hardcastle, I can still sing it pretty much the whole way through, 19, 19, nnnnnnnnnn-19! In Vietnam the average age of the combat soldier was 19 etc. Odd thing was I wasn’t allowed to go to town to get it so I sent my older brother, I actually asked him for King in a Catholic Style by China Crisis. Who knows what would have happened if he only one what I’d asked for a bleeding change! The last record I bought, well downloaded, was Gogol Bordello Super Taranta. Ukrainian Gypsy Punk you can’t beat it. and Paul for their comments within this publication, Matt for the foreword and especially to Richard and Ivor for inviting

Your Favourite BK moment... Blimey there are so many. A favourite just happened at Christmas Bettakultcha. Phil Kirby fell off his chair in the middle of the Random Challenges, he’ll love me for that! Some of the best ones come from unexpected people one I really love is Dr Chris Empsom’s five minutes on Quantum Physics. If Chris can explain that in five minutes with 20 slides, why do I have to sit through 200 slides for 4 hours on next year’s sales forecasts? Some of the Random Challengers should be doing stand up for a living they come alive once you set the slides off, others haven’t fared so well. ________ is better than Powerpoint; just. Everything, PowerPoint drives me crackers. The hours I spend slaving over the slides ensuring they work, then up pops Bill Gates and his crap software and throws it all to the wind. Bring back OHP I say! After global domination - what next? Well once you have the world the next obvious stop is the moon, it’s got a nice reflective surface perfect for projecting on to. Mike Chitty’s projector is pretty powerful so I recon we could manage that. (How) Is BK better than a night in watching ‘Dave’ ? In lots of ways it’s very similar it has more than a passing connection to QI because you-alwayslearn something-you-never-knew-youwanted-to-know-but-you’re-amazed-athow-you-ever-survived-before-withoutknowing-it. On the other hand we don’t have repeats, no two talks are alike (even by the same person), and we don’t have crashing cars or exploding caravans and definitely no Jeremy, bloody, Clarkson! @RichardMichie me to pull this together and everyone involved in the BK phenomenon. Keep on giving us all those reasons to ‘Go Wild!’

In early 2010 someone I trusted told me to sign up for something. I was told all I had to do was a short five-minute presentation – and I probably didn’t need to prepare too much. The day before the presentation I got told it was to be video’d. I promptly had a meltdown. However that next day I presented about a passion of mine to an audience of intrigued people. It was BRILLIANT! This had been in a former flax factory, with my feet nearly frozen to the floor and around 50 people watching. A year passes and, with the anticipation of a larger venue (an audience of 200 – and warmer temperatures), I get a request to return to record the event in photos. I was worried that I could do it justice - and equally honoured to be asked. This, dear reader, is my attempt to show what happened when BettaKultcha first came to Leeds’ Corn Exchange...

BettaKultcha at the Corn Exchange

In early 2010 someone I trusted told me to sign up for something. I was told all I had to do was a short five-minute presentation – and I probably didn’t need to prepare too much.The day before the presentation I got told it was to be video’d. I promptly had a meltdown. However that next day I presented about a passion of mine to an audience of intrigued people. It was BRILLIANT!This had been in a former flax factory, with my feet nearly frozen to the floor and around 50 people watching.A year passes and, with the anticipation of a larger venue (an audience of 200 – and warmer temperatures), I get a request to return to record the event in photos. I was worried that I could do it justice - and equally honoured to be asked. This, dear reader, is my attempt to show what happened when BettaKultcha first came to Leeds’ Corn Exchange... 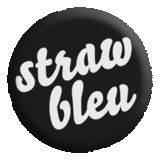