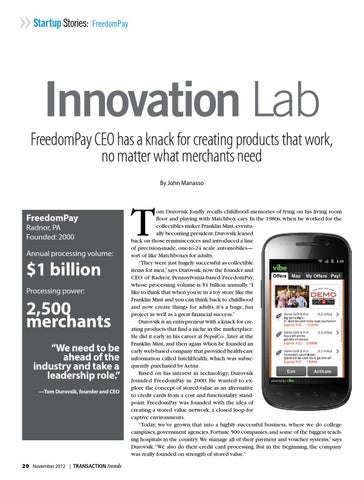 Innovation Lab FreedomPay CEO has a knack for creating products that work, no matter what merchants need By John Manasso

2,500 merchants “We need to be ahead of the industry and take a leadership role.” —Tom Durovsik, founder and CEO

om Durovsik fondly recalls childhood memories of lying on his living room floor and playing with Matchbox cars. In the 1980s, when he worked for the collectibles maker Franklin Mint, eventually becoming president, Durovsik leaned back on those reminiscences and introduced a line of precision-made, one-to-24 scale automobiles— sort of like Matchboxes for adults. “They were just hugely successful as collectible items for men,” says Durovsik, now the founder and CEO of Radnor, Pennsylvania-based FreedomPay, whose processing volume is $1 billion annually. “I like to think that when you’re in a toy store like the Franklin Mint and you can think back to childhood and now create things for adults, it’s a huge, fun project as well as a great financial success.” Durovsik is an entrepreneur with a knack for creating products that find a niche in the marketplace. He did it early in his career at PepsiCo., later at the Franklin Mint, and then again when he founded an early web-based company that provided health-care information called InteliHealth, which was subsequently purchased by Aetna. Based on his interest in technology, Durovsik founded FreedomPay in 2000. He wanted to explore the concept of stored value as an alternative to credit cards from a cost and functionality standpoint. FreedomPay was founded with the idea of creating a stored value network, a closed loop for captive environments. “Today, we’ve grown that into a highly successful business, where we do college campuses, government agencies, Fortune 500 companies, and some of the biggest teaching hospitals in the country.  We manage all of their payment and voucher systems,” says Durovsik. “We also do their credit card processing. But in the beginning, the company was really founded on strength of stored value.” 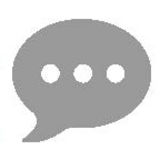 The official publication of the electronic transactions association

The official publication of the electronic transactions association