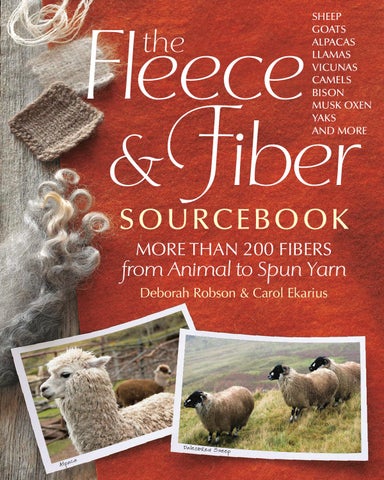 So u rce book More than 200 Fibers

Southdown, Dorset Down, Hampshire, Oxford, Shropshire, Suffolk elasticity beyond our ability to demonstrate!

Part 2. The Rest of the Menagerie

he breeds of this clan, emanating from the hill country of northern England, Scotland, and Wales, are referred to as blackfaced mountain, blackfaced hill, blackfaced heath, blackfaced moor, or just blackface sheep. Today there are six recognized breeds in the group: Dalesbred, Derbyshire Gritstone, Lonk, Rough Fell, Scottish Blackface, and Swaledale. (Suffolks and Hampshires have black faces, but belong to the Down family.) Until the early years of the twentieth century, when flock books were started for the different breeds, these were considered regional landraces of similar heritage, influenced more by their environment than by human selection. Although the exact origin of these breeds is unclear, it is known that monks kept sheep of similar description more than eight hundred years ago. Both written documents and textiles from the period support the assertion that sheep in the Blackfaced Mountain family have been around a long time in the hills and dales of the United Kingdom. Most agricultural historians consider the Lonk and Swaledale breeds to be the oldest breeds, with Dalesbred, Derbyshire Gritstone, Rough Fell, and Scottish Blackface as their progeny. As the name implies, these breeds have dark faces, but they all sport distinct white facial markings as well. They also share other similarities, such as rounded, protruding snouts (known in sheep as “Roman noses”). They’re quite hardy, in response to the harsh environments where they developed. In fact, it was

their very hardiness that kept shepherds from creating flock books and practicing pedigree breeding; the shepherds believed that pedigree breeding would lead to selection for appearance over productivity, thus making them less robust. Scientists recently demonstrated the mechanism that helps these sheep withstand the often cold, wet, and bleak conditions of the hill country. In their bodies, the blood vessels near the surface constrict when exposed to cold, thus helping to retain their inner body heat. The only breed from the Blackfaced Mountain family that is readily found in North America is the Scottish Blackface.

Marley, Me, and Sheep If you saw the movie Marley and Me, you may recall a scene where the characters played by Jennifer Aniston and Owen Wilson take a much-needed trip to Ireland, leaving the irascible Marley with a doggy sitter. During their trip, the travelers are stopped by a flock of Blackfaced Mountain sheep blocking the road.

Early in the development of the Down breeds, Suffolks came from crossing Southdown rams with old-style Norfolk Horn ewes. They were a recognized breed in 1810. The first documented import to North America was made in 1888 by G. B. Streeter, a New York farmer who acquired some prize breeding animals to begin a flock. Suffolks are now the most common breed in North America, thanks to their superior conversion of feed into meat. Because Suffolks are grown mostly for meat, their wool tends to be overlooked. It’s usually sold for commercial processing, and thus growers customarily don’t make the effort needed during the year to produce handspinning­quality fleeces. Yet if you can locate a nice Suffolk, it can be a delight to spin and will reward you with great yarn for winter woollies, because it’s bulky and has good insulating properties.

ʢ ʢ Lock characteristics Dense, resilient, medium-grade fleeces, with blocky, rectangular staples that hold together and may be hard to distinguish from each other. ʢ ʢ Natural colors White. There may be a few black fibers, because these breeds have colored faces, but any off-color fibers lower the commercial value of the wool. Note: At the time of our research, there is a processed fiber sold as “grey Suffolk” that demonstrates few of the qualities that characterize Suffolk wool, differing from breed expectations in length, crimp pattern, presence of kemp, and other regards, in addition to the expected color. We’ve traced this fiber back as far as toward its sources as we can and have not been able to determine definitively what it is. It’s enjoyable wool to use, but it is completely unlike any Suffolk we have ever seen or spun or read about. Spinners who use it should not make assumptions about Suffolk based on their experiences with this fiber.

Using Suffolk Fleece Dyeing. This wool dyes nicely. It isn’t lustrous, but the colors won’t be flat. Fiber preparation and spinning tips. This is a nice, versatile, medium-handling wool. Shorter fleeces can be carded; longer ones will want to be flicked or combed. Spin to maintain the loft and springy

character, keeping the drafting on the light side and the twist at moderate levels. Knitting, crocheting, and weaving. Great for socks, mittens, hats, and everyday sweaters. The finer fleeces will work next to the skin but still have good durability. Best known for. Being unnecessarily overlooked as a fiber resource for handspinners.

Derbyshire Gritstone The Derbyshire Gritstone originated in the 1770s in a valley called the Dale of Goyt, so the breed was once known as Dale o’Goyt sheep. Goyt is an old Celtic word for water, and the valley of the River Goyt (located on the border of Derbyshire and Cheshire counties in the Peak District National Park) is better known today for its two giant reservoirs and recreation than for its sheep. Like other Blackfaced Mountain breeds, Derbyshire Gritstones are hardy sheep, developed to endure harsh conditions and marginal feed. Their black faces bear white markings, yet there is no particular pattern to the white. Derbyshire Gritstones are polled (or hornless) in both sexes.

Grown primarily for meat, Derbyshire Gritstones nonetheless produce a versatile fleece that warrants, and rewards, exploration by people who work with fiber by hand (including felters, who find it to have the best feltability of the Blackfaced Mountain family). Consistent, dense, and with enough crimp to give yarns good loft and resilience, Gritstone wool is easy to spin and feels pleasant on the needles or loom. It is typically finer than the wool from the other Blackfaced Mountain breeds. In fact, Gritstone fleeces have won top honors at major shows in Britain, beating out entries from finer-wooled and long-wooled breeds.

Using Derbyshire Gritstone Fleece Dyeing. Our samples had a very subtle bit of luster, which suggests clear colors with more light reflection than in the other breeds in this group. Fiber preparation and spinning tips. The length suggests picking and spinning from the locks (which need to be loosened up) or combing. Carding will work well with a shorter fleece or a long-staple selection if the staples are cut in half. Easy to draft. The longer-stapled fleeces can be low-twist bulky singles, and other lengths will make nice yarns in weights ranging from lace to bulky plied yarns.

Knitting, crocheting, and weaving. Unusually fine for this group of breeds, Derbyshire Gritstone is one of the workhorse wools, like a classic knitting worsted; it is a versatile choice for projects that call for midrange wools, like sweaters, blankets, and weft-faced or balanced weave structures. Best known for. Exceptionally good quality and fine wool for a breed that is part of this family. Photos © John Polak

The Hebrides, a large archipelago off the west coast of Scotland, consist of over five hundred islands, though most are uninhabited rock spits. There are two major groups of islands: the Inner Hebrides (closest to the mainland of Scotland) and the Outer Hebrides (which lie farther to the west in the Atlantic). The warm Gulf Stream plus the varied mix of landforms and waters yield an amazingly rich diversity of marine life. Nearly a third of the world’s species of whales, dolphins, and porpoises inhabit the seas surrounding the Hebrides! Today’s Hebridean sheep come from a handful of flocks that were relocated to estates in England during the late 1800s. Though they are probably related to the ancient primitive sheep that the Vikings brought to the Hebrides a millennium or so ago, these Hebrideans aren’t necessarily true representatives of the sheep that once lived on the islands. Their ancestors on the islands died out as the crofters moved to raising “improved” breeds, such as the Cheviots (see page {#}) or Scottish Blackface (see page 54). The current Hebrideans are frequently multihorned and always have black wool, which lightens to gray or reddish brown on the tips (with both age and exposure to sun). The original Hebridean sheep occasionally had multiple horns, but far more frequently had only two, and they showed a range of colors, including blue-gray, brown, black, and russet. These

Sea World To learn more about the sea life of the Hebrides, visit the Hebridean Whale and Dolphin Trust website at www.whaledolphintrust.co.uk.

original animals also sported white faces and legs. It is possible that the Hebrideans we know today are the result of specific selection by the aristocrats who chose these animals as lawn ornaments, or it’s possible that the Hebridean sheep brought to the estates may have been crossed with Black Welsh Mountain sheep (page {#}). Either way, today’s flock of Hebrideans is consistently black, and the multihorned trait runs strongly through the breed. The Hebridean is a breed with exceptionally variable, dense wool that can stand up to weather and wear. Although double coatedness is not noted in other information sources, our sample fiber could be separated into two coats. The demarcation between the two was not absolutely clear, as it sometimes is. There was a gradual shift, rather than a gap, between the two types of fiber, but separation was relatively easy. The deep color and sturdy texture are givens. The softness may be suited to either everyday or outerwear garments, or to blankets or sturdy mats.

Using Hebridean Fleece Dyeing. This is generally pointless for Hebridean fleece. Fiber preparation and spinning tips. Preparation and spinning approaches depend on fiber length and whether the fleece is double coated or not, and on whether you want to separate qualities of fiber or spin them together. Depending on individual fleece characteristics, the spinning may be a little challenging.

Knitting, crocheting, and weaving. Use Hebridean where you want the luscious black color and a lot of durability. It is great for outerwear. Best known for. Dark, lustrous color.

• Detailed photographs of more than 200 fiber animals and their raw, cleaned, and spun fleece, as well as samples knit and woven with it

• Comprehensive fiber facts for each breed, including color, density, strength, and staple length as well as recommendations for both processing and using the fiber • Expert information on breed conservation and heritage breed propagation • Easy-to-use charts and boxes for quick reference • The book no fiber- or animal-lover can be without

tiles while editing Shuttle Spindle &amp; Dyepot for the

Handweavers Guild of America. She then moved to Interweave Press as editor of Spin-Off magazine. During that time, she was part of the team that presented SOAR (the Spin-Off Autumn Retreat), and she initiated and coordinated the Save the Sheep Project, which involved an international juried show of artwork made

• Deborah Robson will be featured on two separate episodes of Interweave TV, a fiber craft television show broadcast on PBS stations, in April 2011, discussing various fiber breeds and the wool from those breeds

from rare-breed wools. Now she is the editor and publisher of Nomad Press, which publishes books on traditional and ethnic knitting

Builder. She lives in the mountains of Colorado.

and spinning. She lives in Colorado with her daughter.

An advance look at some designed spreads from our upcoming title, the Fleece & Fiber Sourcebook, which will be available in May 2011. 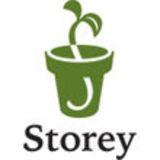