Food scrap composting in the community 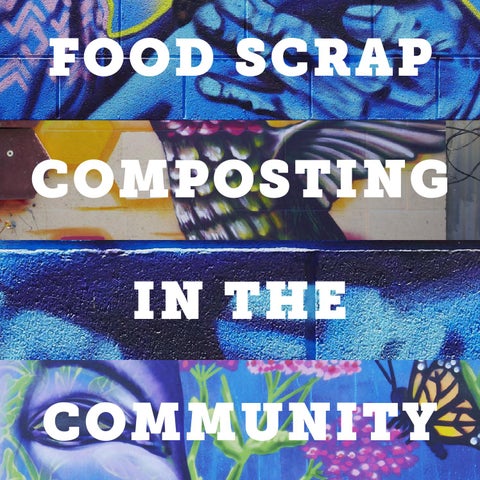 FOOD SCRAP COMPOSTING IN THE COMMUNITY

â&amp;#x20AC;&amp;#x153;Through these murals, we are building on our partnerships with food justice organizations creating a powerful campaign and raising awareness about the benefits of compost through public art. We feel strongly that a series of murals highlighting the benefits of food scrap composting is deeply engaging and impactful to the community.â&amp;#x20AC;?

Food Scrap Composting in the Community StopWaste and Oakland-based muralists from Community Rejuvenation Project have teamed up to celebrate earth and justiceâ&amp;#x20AC;&amp;#x201D;using art to encourage people to compost food scraps. With the talents of artists Desi Mundo and Pancho Peskador, StopWaste has launched a series of murals across Alameda County to raise awareness about the importance of composting food scraps and food-soiled paper to help create healthy, water-conserving soil for local community gardens and urban farms. With each unique mural, Community Rejuvenation Project, StopWaste and communities throughout Alameda County are saving water, promoting local food and greening their neighborhoodsâ&amp;#x20AC;&amp;#x201D;and their thumbs.

In partnership with ASCEND Academy in East Oakland and Oakland LEAF, StopWaste and Community Rejuvenation Project added a pair of new food scrap composting murals to Alameda County’s collection. The murals cover the walls surrounding the school’s greenhouse and composting system. Together, they emphasize the role compost from food scraps plays in supplying the community with fresh produce and creating a healthy ecosystem­—one that’s focused on mixing compost with soil to help retain water in times of drought.

The mural at Azevada Elementary School in Fremont celebrates a partnership between StopWaste and the school PTA to increase composting and recycling among the schoolâ&amp;#x20AC;&amp;#x2122;s families. Supported by a StopWaste community outreach grant, the PTA worked with Azevada Elementary to launch its compost program at the start of the 2014 school year. The mural, painted by Community Rejuvenation Project, honors the schoolâ&amp;#x20AC;&amp;#x2122;s commitment to composting food scraps and recognizes their efforts to create one of the best recycling and composting programs in the Fremont Unified School District.

To celebrate the reopening of the McClymonds High School campus garden, Community Rejuvenation Project painted their fifth mural of the series in Alameda County highlighting the importance of composting food scraps to support healthy gardens. Students, focused on food justice, created the garden three years ago as a response to the limited availability of fresh food at the school and in the surrounding community. The mural complements the gardenâ&amp;#x20AC;&amp;#x2122;s role as a community resource in West Oakland. As part of the May 2015 reopening celebration, StopWaste staff shared food scrap composting pails and tips with the community.

StopWaste and Community Rejuvenation Project kicked off their partnership by painting the first mural of the series at Melrose Leadership Academy in Oakland. Over the course of two days, parents, students and staff joined together to paint the mural depicting a circular compost “mandala” complete with worms, water, food scraps and images of healthy crops, like those growing in the school’s garden. The mural is a timeless, educational tool and reminder to all that compost from food scraps is a key ingredient for healthy, green and just communities.

At Saint Bartholomew’s Episcopal Church in Livermore, the Big Heart Garden mural commemorates Big Heart Wellness Center and StopWaste’s shared dedication of support to the community by providing local residents with food, while also making sure food scraps aren’t wasted. Painted by Community Rejuvenation Project, the mural illustrates the connection between composting, the creation of water-conserving soil and the growing of healthy food. It’s a backdrop to the Center’s own garden, which uses compost from food scraps and provides seasonal, organic produce for Livermore residents in need.

Desi Mundo is the founder of Community Rejuvenation Project (CRP). Over the past three years, CRP has produced more than 200 murals primarily in the Bay Area. As an artist, Desi has collaborated with influential aerosol artists such as ZORE, P.H.A.S.E.2, VULCAN, RAVEN, and RAS TERMS. Desi has a long history as an educator and youth worker in K-12 Oakland schools, including Oakland Unity High School, ARISE, Calvin Simmons, and OASIS. He has been recognized with a “Best of the Bay” Award by the East Bay Express for his monthly youth art series, the “Weekend Wake-Up.” Desi received the Rising Leaders Fellowship from the Youth Leadership Institute in 2005. He has worked with numerous non-profit and community organizations, such as Urban Tilth, Restorative Justice for Oakland Youth, and United Roots, while also facilitating an after-school mural workshop called the Arrow-Soul Council. Most recently, Desi has served as the producer and a lead artist on the Alice Street Mural Project.

Pancho Peskador is a self-taught artist born and raised in Chile under the oppressive regime of Augusto Pinochet. He attended the School of the Arts in both Valparaiso and Vina del Mar. He joined the TAV, Taller de Artists Visuales, in Valparaiso where he began his artistic career as a printmaker. In 2012, Pancho was commissioned by the 67 Suenos organization to paint a three-story mural in downtown San Francisco with a group of undocumented youth. Pancho has created artwork for West Contra Costa Children’s Services and Youth Spirit Artworks and painted murals in Chile, Germany, and the United States. Working fluently across mediums, his work on canvas and photography is internationally recognized. Pancho currently lives in Oakland, California where he creates, as he calls it, “visual guerrillas” expressed as paintings, drawings, prints, collages, murals and mixed media. He is a resident after-school art teacher at Melrose Leadership Academy. Most recently Pancho was a lead artist on the Alice Street Mural Project.

PHOTOGRAPHY: DAVID FENTON David Fenton is a travel, interiors and architectural photographer based in Oakland, CA. His clients include Sunset, Adidas, and Leviâ&amp;#x20AC;&amp;#x2122;s. To see more of his work, visit www.davidfenton.com.

Food scrap composting in the community

StopWaste and Oakland-based muralists from Community Rejuvenation Project have teamed up to celebrate earth and justice—using art to encourage people to compost food scraps. With the talents of artists Desi Mundo and Pancho Peskador, StopWaste has launched a series of murals across Alameda County to raise awareness about the importance of composting food scraps and food-soiled paper to help create healthy, water-conserving soil for local community gardens and urban farms. With each unique mural, Community Rejuvenation Project, StopWaste and communities throughout Alameda County are saving water, promoting local food and greening their neighborhoods—and their thumbs.