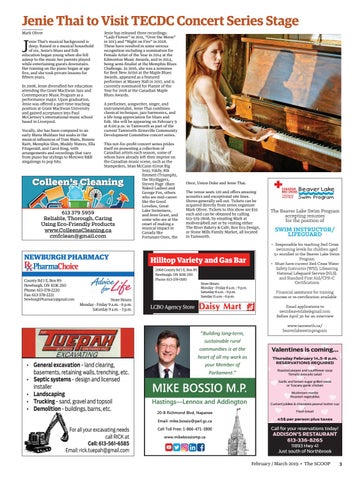 enie Thai’s musical background is deep. Raised in a musical household of six, Jenie’s blues and folk education began young when she fell asleep to the music her parents played while entertaining guests downstairs. Her training on the piano began at age five, and she took private lessons for fifteen years. In 2008, Jenie diversified her education attending the Grant MacEwan Jazz and Contemporary Music Program as a performance major. Upon graduation, Jenie was offered a part-time teaching position at Grant MacEwan University and gained acceptance into Paul McCartney’s international music school based in Liverpool. Vocally, she has been compared to an early Maria Muldaur but soaks in the musical influences of Tom Waits, Bonnie Raitt, Memphis Slim, Muddy Waters, Ella Fitzgerald, and Carol King, with arrangements and recordings that vary from piano bar stylings to Motown R&B singalongs to pop hits.

Jenie has released three recordings: “Lady Flower” in 2011, “Over the Moon” in 2013 and “Night on Fire” in 2018. These have resulted in some serious recognition including a nomination for Female Artist of the Year in 2014 at the Edmonton Music Awards, and in 2014, being semi-finalist at the Memphis Blues Challenge. In 2016, she was a nominee for Best New Artist at the Maple Blues Awards, appeared as a featured performer at Massey Hall in 2017, and is currently nominated for Pianist of the Year for 2018 at the Canadian Maple Blues Awards. A performer, songwriter, singer, and instrumentalist, Jenie Thai combines classical technique, jazz harmonics, and a life-long appreciation for blues and folk. She will be appearing on February 9 at 8:00 p.m. in Tamworth as part of the current Tamworth-Erinsville Community Development Committee concert series.

This not-for-profit concert series prides itself on presenting a collection of Canadian artists each season, some of whom have already left their imprint on the Canadian music scene, such as the Stampeders, Séan McCann (Great Big Sea), Valdy, Rik Emmett (Triumph), the Skydiggers, Steven Page (Bare Naked Ladies) and George Fox, others who are mid-career like the Good Lovelies, Great Lake Swimmers, 613 379 5959 and Jenn Grant, and Reliable, Thorough, Caring some who are at the onset of making a Using Eco-Friendly Products musical impact in www.ColleensCleaning.ca Canada like cmfclean@gmail.com Fortunate Ones, the

Once, Union Duke and Jenie Thai. The venue seats 120 and offers amazing acoustics and exceptional site lines. Shows generally sell out. Tickets can be acquired directly from series organizer Mark Oliver. Tickets to this show are $35 each and can be obtained by calling 613-379-2808, by emailing Mark at moliver@bell.net or by visiting either The River Bakery & Café, Bon Eco Design, or Stone Mills Family Market, all located in Tamworth.

The Beaver Lake Swim Program accepting resumes for the position of

45$ per person plus taxes

Call for your reservations today!