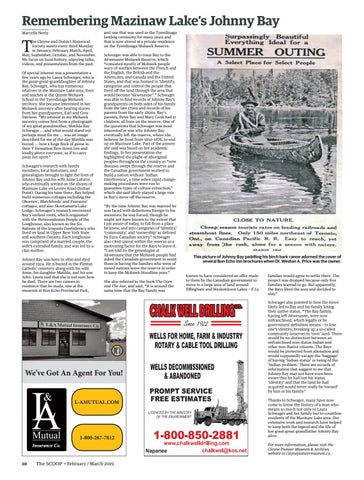 he Cloyne and District Historical Society meets every third Monday in January, February March, April, May, September, October, and November. We focus on local history, enjoying talks, videos, and presentations from the past. Of special interest was a presentation a few years ago by Laura Schwager, who is the great-great-granddaughter of Johnny Bay. Schwager, who has numerous relatives in the Mazinaw Lake area, lives and teaches at the Quinte Mohawk School in the Tyendinaga Mohawk territory. She became interested in her Mohawk ancestry after hearing stories from her grandparents, Earl and Cora Davison. “My interest in my Mohawk ancestry comes first from a photograph of my great grandmother, Matilda Bay Schwager ... and what would stand out perhaps most for me ... was an image described for me of the day Matilda was buried ... how a huge flock of geese in their V formation flew down low and loudly above everyone, as if to carry away her spirit.” Schwager’s research with family members, local historians, and genealogists brought to light the lives of Johnny Bay and his wife Anne Laforce, who eventually settled on the shores of Mazinaw Lake on Levere Road (Indian Point). During his time there, Bay helped build numerous cottages including the Obornes’, Blatchfords’ and Pearsons’ cottages, and also Skootamatta Lake Lodge. Schwager’s research uncovered Bay’s earliest roots, which originated with the Hotinonshonni People of the Longhouse, also known as the Six Nations of the Iroquois Confederacy who lived on land in Upper New York State and southern Ontario. Each longhouse was comprised of a married couple, the wife’s extended family, and was led by a clan mother. Johnny Bay was born in 1850 and died around 1924. He is buried in the Flinton Catholic cemetery along with his wife Anne, his daughter Matilda, and his son John. Laura said that she is not sure how he died. There are two canoes in existence that he made, one at the museum at Bon Echo Provincial Park,

and one that was used in the Tyendinaga landing ceremony for many years and that is now stored at a private residence on the Tyendinaga Mohawk Reserve. Schwager was able to trace Bay to the Akwesasne Mohawk Reserve, which “consisted mostly of Mohawk people wary of warfare between the French and the English, the British and the Americans, and Canada and the United States, and that was formed to ‘identify, categorize and control the people that lived off the land through the area that would become ‘Akwesasne’’.” Schwager was able to find records of Johnny Bay’s grandparents on both sides of his family from the late 1700s and records of his parents from the early 1800s. Bay’s parents, Peter Bay and Mary Cook had 11 children, all born on the reserve. One of the questions that Schwager was most interested in was why Johnny Bay eventually left the reserve, where she believes he lived from 1850-1876, to end up on Mazinaw Lake. Part of the answer she said was based on her academic findings. In her presentation she highlighted the plight of Aboriginal peoples throughout the country as “new diseases swept through the reserve and the Canadian government worked to build a nation without ‘Indian interference’, a time when rapid changemaking procedures were run to guarantee types of culture extinction,” which she said likely played a large role in Bay’s move off the reserve. “By the time Johnny Bay was married he was faced with definitions foreign to his ancestors; he was forced, though he might not have known to the extent that I am aware of today, to fall from a place he knew, and into categories of ‘identity,’ ‘community,’ and ‘ownership’ as defined by Euro-Canadian society.” Schwager also cited unrest within the reserve as a motivating factor for the Bays to leave it. “I am told by the genealogist at Akwesasne that the Mohawk people had asked the Canadian government to assist them in having the families who were of mixed nations leave the reserve in order to keep the Mohawk bloodline pure.” She also referred to the book The Oxen and The Axe, and said, “It is around the same time that the Bay family was

We’ve Got An Agent For You!

This picture of Johnny Bay paddling his birch bark canoe adorned the cover of several Bon Echo Inn brochures when Dr. Weston A. Price was the owner. known to have considered an offer made to them by the Canadian government to move to a large area of land around Effingham and Weslemkoon Lakes – if 24

families would agree to settle there. The project was dropped because only five families wanted to go. But apparently, the Bays liked the area and decided to stay.” Schwager also pointed to how the move likely led to Bay and his family losing their native status. “The Bay family, having left Akwesasne, were now enfranchised, which legally or by government definition means – to lose one’s identity, breaking up a so-called community (reserve) to ‘own’ land. There would be no distinction between an enfranchised non-status Indian and other non-Native citizens. The Bays would be protected from alienation and would supposedly escape the ‘baggage’ of having ‘Indian status’ or being of the ‘Indian problem.’ There are records of information that suggest to me that Johnny Bay may not have even been aware that he had lost his status ‘identity’ and that the land he had acquired would never really be ‘owned’ by him or his family.” Thanks to Schwager, many have now come to know the history of a man who means so much not only to Laura Schwager and her family but to countless residents of the Mazinaw Lake area. Her extensive work and research have helped to keep both the legend and the life of her great-great-grandfather Johnny Bay alive. For more information, please visit the Cloyne Pioneer Museum & Archives website at cloynepioneermuseum.ca.