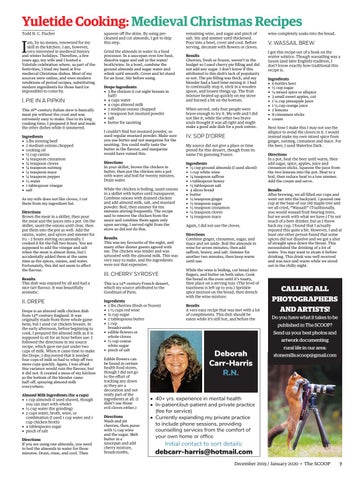 am, by no means, renowned for my skill in the kitchen. I am, however, very interested in medieval history and winter holidays. Therefore, a few years ago, my wife and I hosted a Yuletide celebration where, as part of the festivities, I tried my hand at five medieval Christmas dishes. Most of my sources were online, and were modern renditions of period recipes, substituting modern ingredients for those hard (or impossible) to come by.

i. Pie in a PiPKin This 16th-century Italian stew is basically meat pie without the crust and was extremely easy to make. Due to its long cooking time, I prepared it first and made the other dishes while it simmered. Ingredients • 3 lbs stewing beef • 2 medium onions chopped • cooking oil • ½ cup raisins • ¼ teaspoon cinnamon • ¼ teaspoon cloves • ¼ teaspoon nutmeg • ¼ teaspoon mace • ¼ teaspoon pepper • ½ water • 1 tablespoon vinegar • salt As my wife does not like cloves, I cut them from my ingredient list. Directions Brown the meat in a skillet, then pour the meat and the juices into a pot. On the skillet, sauté the onions until clear, then put them into the pot as well. Add the raisins, water, and spices and simmer for 1½ – 2 hours stirring occasionally. I cooked it for the full two hours. You are supposed to add the vinegar and salt when the meat is almost done, but I accidentally added them at the same time as the spices, raisins, and water. Fortunately, this did not seem to affect the flavour. Results This dish was enjoyed by all and had a nice tart flavour. It was beautifully aromatic.

ii. dRePe Drepe is an almond milk chicken dish from 14th-century England. It was originally made from three whole game hens, but I used cut chicken breasts. In the early afternoon, before beginning to cook, I prepared the almond milk as it is supposed to sit for an hour before use. I followed the directions in my source recipe, which gave me just under two cups of milk. When it came time to make the Drepe, I discovered that it needed four cups of milk so had to whip off two more cups quickly. Again, I was afraid this variance would ruin the flavour, but it did not. It created a mess of my kitchen as the bottom of the blender came half-off, spraying almond milk everywhere. Almond Milk Ingredients (for 4 cups) • 1 cup almonds (I used shaved, though you can start with whole) • ½ cup water (for grinding) • 2 cups water, broth, wine, or combination (I used 1 cup water and 1 cup chicken broth) • 4 tablespoons sugar • pinch of salt Directions If you are using raw almonds, you need to boil the almonds in water for three minutes. Drain, rinse, and cool. Then

squeeze off the skins. By using precleaned and cut almonds, I got to skip this step. Grind the almonds in water in a food processor. In a saucepan over low heat, dissolve sugar and salt in the water/ broth/wine. In a bowl, combine the ground almonds and sugar water and whisk until smooth. Cover and let stand for an hour. Stir before using. Drepe Ingredients • 3 lbs chicken (I cut eight breasts in half) • 4 cups water • 4 cups almond milk • 2 medium onions chopped • 1 teaspoon hot mustard powder • salt • butter for sautéing I couldn’t find hot mustard powder, so used regular mustard powder. Make sure you use butter and not margarine for the sautéing. You could really taste the butter in the flavour, and margarine would have ruined this. Directions In your skillet, brown the chicken in butter, then put the chicken into a pot with water and boil for twenty minutes. Drain water. While the chicken is boiling, sauté onions in a skillet with butter until transparent. Combine onions with drained chicken and add almond milk, salt, and mustard powder. Boil, then simmer for ten minutes stirring frequently. The recipe said to remove the chicken from the sauce and combine them again only upon serving. I served right from the stove so did not do this. Results This was my favourite of the night, and many other dinner guests agreed with me. The chicken was tender and was saturated with the almond milk. This was very easy to make, and the ingredients were not that expensive.

iii. cheRRY sYRosYe This is a 14th-century French dessert, which my source attributed to the Goodman of Paris. Ingredients • 2 lbs cherries (fresh or frozen) • 1 ½ cups red wine • ¾ cup sugar • 2 tablespoons butter • 1 cup breadcrumbs • edible flowers or whole cloves • ⅓ cup coarse white sugar • pinch of salt Edible flowers can be found in certain health food stores, though I did not go to the effort of tracking any down as they are a decoration and not really part of the ingredients at all. (I didn’t use those evil cloves either.) Directions Wash and pit cherries, then puree with ½ cup wine and the sugar. Melt butter in a saucepan and add cherry mixture, breadcrumbs,

remaining wine, and sugar and pinch of salt. Stir and simmer until thickened. Pour into a bowl, cover and cool. Before serving, decorate with flowers or cloves. Results Cherries, fresh or frozen, weren’t in the budget so I used cherry pie filling and did not add any sugar. I don’t know if this attributed to this dish’s lack of popularity or not. The pie filling was thick, and my blender had a hard time mixing it. I had to continually stop it, stick in a wooden spoon, and loosen things up. The fruit mixture heated up quickly on my stove and burned a bit on the bottom. When served, only four people were brave enough to try it. My wife and I did not like it, while the other two brave souls thought it was all right and might make a good side dish for a pork entrée.

iV. soP d’oRRe My source did not give a place or time period for this dessert, though from its name I’m guessing France. Ingredients • ½ cup ground almonds (I used sliced) • 1 cup white wine • ⅛ teaspoon saffron • 1 tablespoon honey • ½ tablespoon salt • 4 slices bread • butter • ¼ teaspoon ginger • ½ teaspoon sugar • ½ teaspoon cinnamon • ¼ teaspoon cloves • ⅛ teaspoon mace Again, I did not use the cloves. Directions Combine ginger, cinnamon, sugar, and mace and set aside. Boil the almonds in wine for seven minutes, then add saffron, honey, and salt. Simmer for another two minutes, then keep warm until use. While the wine is boiling, cut bread into fingers, and butter on both sides. Cook the bread in the oven until it’s toasty, then place on a serving tray. (The level of toastiness is left up to you.) Sprinkle spice mixture on the bread, then drench with the wine mixture. Results A very easy recipe that was met with a lot of compliments. This dish should be eaten while it’s still hot, and before the

wine completely soaks into the bread.

V. WassaiL BReW I got this recipe out of a book on the winter solstice. Though wassailing was a Saxon (and later English) tradition, I don’t know exactly how traditional this recipe is. Ingredients • 6 bottles beer • ½ cup sugar • ¼ mixed spice or allspice • 3 small sweet apples, cut • 1 ¼ cup pineapple juice • 1 ¼ cup orange juice • 2 lemons • 8 cinnamon sticks • cream Next time I make this I may not use the allspice to avoid the cloves in it. I would instead make my own mixed spice from ginger, nutmeg, cinnamon and mace. For the beer, I used Waterloo Dark. Directions In a pot, heat the beer until warm, then add sugar, spice, apples, juice and cinnamon sticks. Squeeze the juice from the two lemons into the pot. Heat to a boil, then reduce heat to a low simmer. Add the cream and serve. Results After brewing, we all filled our cups and went out into the backyard. I poured one cup at the base of our old maple tree and we all cried, “Wassail!” (Traditionally, you would wassail fruit-bearing trees, but we work with what we have.) I’m not much of a beer drinker, but as I threw back my cup, I found that I actually enjoyed this quite a bit. However, I and at least one other person found that some spices did not dissolve and we got a shot of straight spice down the throat. This necessitated the drinking of a lot of water. You may want to strain it before drinking. This drink was well received and was nice and warm while we stood out in the chilly night.

CALLING ALL PHOTOGRAPHERS AND ARTISTS! Do you have what it takes to be published in The SCOOP? Send us your best photos and artwork documenting

rural life in our area: stonemills.scoop@gmail.com

• 40+ yrs. experience in mental health • In-patient/out-patient and private practice (fee for service) • Currently expanding my private practice to include phone sessions, providing counselling services from the comfort of your own home or ofﬁce