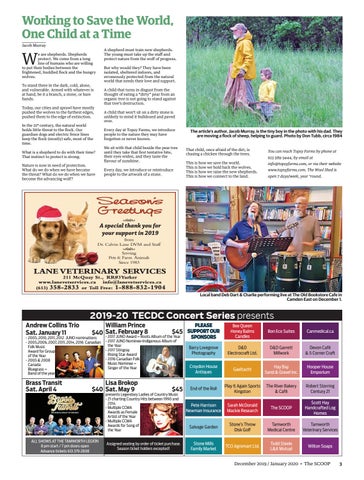 Working to Save the World, One Child at a Time Jacob Murray

A shepherd must train new shepherds. The young must take up the staff and protect nature from the wolf of progress.

e are shepherds. Shepherds protect. We come from a long line of humans who are willing to put their bodies between the frightened, huddled flock and the hungry wolves.

But why would they? They have been isolated, sheltered indoors, and erroneously protected from the natural world that needs their love and support.

To stand there in the dark, cold, alone, and vulnerable. Armed with whatever is at hand, be it a branch, a stone, or bare hands.

A child that turns in disgust from the thought of eating a “dirty” pear from an organic tree is not going to stand against that tree’s destruction.

Today, our cities and sprawl have mostly pushed the wolves to the farthest edges, pushed them to the edge of extinction.

A child that won’t sit on a dirty stone is unlikely to mind it bulldozed and paved over.

In the 21st century, the natural world holds little threat to the flock. Our guardian dogs and electric fence lines keep the flock (mostly) safe, most of the time.

Every day at Topsy Farms, we introduce people to the nature they may have forgotten or never known. We sit with that child beside the pear tree until they take that first tentative bite, their eyes widen, and they taste the flavour of sunshine.

Every day, we introduce or reintroduce people to the artwork of a stone.

The article’s author, Jacob Murray, is the tiny boy in the photo with his dad. They are moving a flock of sheep, helping to guard. Photo by Don Tubb, circa 1984 That child, once afraid of the dirt, is chasing a chicken through the trees.

You can reach Topsy Farms by phone at

A special thank you for your support in 2019

End of the Roll