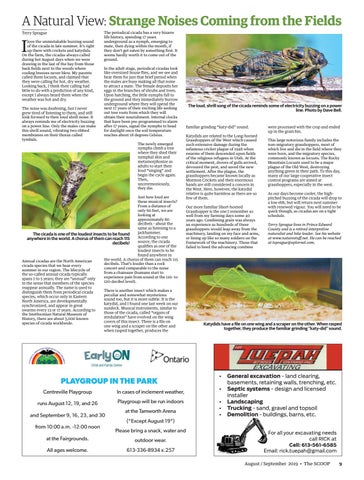 love the unmistakable buzzing sound of the cicada in late summer. It’s right up there with crickets and katydids. On the farm, the cicadas always called during hot August days when we were drawing in the last of the hay from those back fields next to the woods where cooling breezes never blew. My parents called them locusts, and claimed that they were calling for hot, dry weather. Looking back, I think their calling had little to do with a prediction of any kind, except I always heard them when the weather was hot and dry. The noise was deafening, but I never grew tired of listening to them, and still look forward to their loud shrill noise. It always reminds me of electricity buzzing on a power line. Only the males can make this shrill sound, vibrating two ribbed membranes on their thorax called tymbals.

The periodical cicada has a very bizarre life history, spending 17 years underground as a nymph, emerging to mate, then dying within the month, if they don’t get eaten by something first. It seems hardly worth it to come out of the ground. In the adult stage, periodical cicadas look like oversized house ﬂies, and we see and hear them for just that brief period when the males are busy making all that noise to attract a mate. The female deposits her eggs in the branches of shrubs and trees. Upon hatching, the little nymphs fall to the ground and they immediately burrow underground where they will spend the next 17 years of their exciting life seeking out tree roots from which they will obtain their nourishment. Internal clocks that have been pre-programmed to alarm after 17 years, signal the nymphs to head for daylight once the soil temperature reaches about 18 degrees Celsius. The newly emerged nymphs climb a tree where they shed their nymphal skin and metamorphosize as adults to start their loud “singing” and begin the cycle again. Then, unceremoniously, they die.

The loud, shrill song of the cicada reminds some of electricity buzzing on a power line. Photo by Dave Bell.

familiar grinding “katy-did” sound. Katydids are related to the Long-horned Grasshoppers of the West which caused such extensive damage during the infamous cricket plague of 1948 when swarms of them descended upon fields of the religious refugees in Utah. At the critical moment, droves of gulls arrived, devoured the pest, and saved the new settlement. After the plague, the grasshoppers became known locally as Mormon Crickets and their enormous bands are still considered a concern in the West. Here, however, the katydid relative is quite harmless as there are so few of them. Our more familiar Short-horned Grasshopper is the one I remember so well from my farming days some 40 years ago. Combining grain was always an experience as hundreds of these grasshoppers would leap away from the machinery, landing on my face and arms, or lining up like so many soldiers on the framework of the machinery. Those that failed to heed the advancing combine

There is another insect which makes a peculiar and somewhat mysterious sound too, but it is more subtle. It is the katydid, and I found one last week on our sundeck. Musical instruments, similar to those of the cicada, called “organs of stridulation” have evolved on the wing covers of this insect. There is a file on one wing and a scraper on the other and when rasped together, produces the

PLAYGROUP IN THE PARK Centreville Playgroup

In cases of inclement weather,

Playgroup will be run indoors

at the Tamworth Arena (*Except August 19*) Please bring a snack, water and

were processed with the crop and ended up in the grain bin. This large notorious family includes the non-migratory grasshoppers, most of which live and die in the field where they were born, and the migratory species, commonly known as locusts. The Rocky Mountain Locusts used to be a major plague of the Old West, destroying anything green in their path. To this day, many of our large cooperative insect control programs are aimed at grasshoppers, especially in the west. As our days become cooler, the highpitched buzzing of the cicada will drop to a low ebb, but will return next summer with renewed vigour. You will need to be quick though, as cicadas are on a tight schedule. Terry Sprague lives in Prince Edward County and is a retired interpretive naturalist and hike leader. See his website at www.naturestuﬀ.net. He can be reached at tsprague@xplornet.com.

Katydids have a ﬁle on one wing and a scraper on the other. When rasped together, they produce the familiar grinding “katy-did” sound.