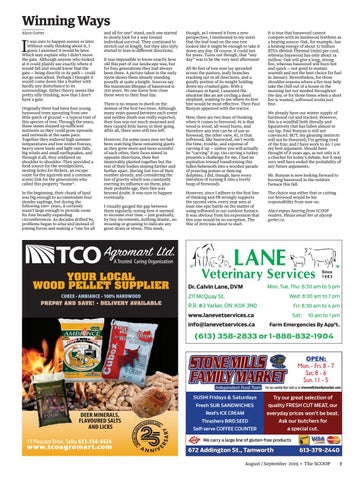 t was sure to happen sooner or later. Without really thinking about it, I guess I assumed it would be later. Which may explain why I didn’t move the gate. Although anyone who looked at it could plainly see exactly where it would fall and would know that the gate — being directly in its path — could not go unscathed. Perhaps I thought it would come down like a feather with hardly any disturbance to its surroundings. Either theory seems like pretty silly thinking, now that I don’t have a gate. Originally there had been four young basswood trees sprouting from one little patch of ground — a typical trait of this species of tree. Through the years, these stems slurped up sufficient nutrients so they could grow upwards and outwards at the same pace. Together they endured high summer temperatures and low winter freezes, heavy snow loads and light rain falls, big winds and small earthquakes, and through it all, they soldiered on shoulder to shoulder. They provided a food source for the woodpeckers, nesting holes for ﬂickers, an escape route for the squirrels and a common scenic link for the generations who called this property “home”. In the beginning, their chunk of land was big enough to accommodate four slender saplings, but during the following 100+ years, it certainly wasn’t large enough to provide room for four broadly expanding circumferences. As decades drifted by, problems began to arise and instead of joining forces and making a “one for all

and all for one” stand, each one started to slowly look for a way toward individual survival. They continued to stretch out in length, but they also slyly started to lean in different directions. It was impossible to know exactly how old this part of our landscape was, but for four generations they had always been there. A picture taken in the early 1950s shows them already standing proudly at quite a height. Sources say the maximum lifespan of basswood is 200 years. No one knew how close these were to their final day. There is no reason to dwell on the demise of the first two trees. Although many years passed between each event and neither death was really expected, their loss was not much mourned and they caused little havoc in their going. After all, there were still two left. However, for some years now we had been watching these remaining giants as they grew more and more scornful of each other, their faces aimed in opposite directions, their feet immovably planted together but the rest of their bodies sloping farther and farther apart. Having lost two of their number already, and considering the law of gravity which was constantly exerting its inﬂuence on them, plus their probable age, their fate was beyond doubt. It was sure to happen eventually. I visually gauged the gap between them regularly, noting how it seemed to increase over time — just gradually, by tiny increments, nothing drastic, no moaning or groaning to indicate any great strain or stress. This week,

though, as I viewed it from a new perspective, I mentioned to my sister that the leaf-load on the one tree looked like it might be enough to take it down any day. Of course, it could last for years. Turns out though, that “any day” was to be the very next afternoon! All 80 feet of tree now lay sprawled across the pasture, leafy branches reaching out in all directions, and a goodly portion of its weight holding down my crushed gate. With a chainsaw in hand, I assessed the situation like an ant circling a dead elephant, wanting to see where its first bite would be most effective. Then Paul Bunyan appeared with the tractor. Now, there are two lines of thinking when it comes to firewood: #1 is that wood is wood, all wood burns, and therefore any tree can be of use as firewood; the other view, #2, is that softwood, like basswood, isn’t worth the time, trouble, and expense of carving it up — unless you will actually be “carving” it up. (As carving a turkey presents a challenge for me, I had no aspiration toward transforming this fallen behemoth into a wooden parade of prancing ponies or dancing dolphins. I did, though, have every intention of turning it into a lovely heap of firewood). However, since I adhere to the first line of thinking and PB strongly supports the second view, every year sees at least one epic battle on the matter of using softwood in our outdoor furnace. It was obvious from his expression that this year would be no exception. The War of 2019 was about to start.

It is true that basswood cannot compete with its hardwood brethren as a heating source. Oak, for example, has a heating energy of about 37 million BTUs (British Thermal Units) per cord, whereas basswood has only about 14 million. Oak will give a long, strong fire, whereas basswood will burn hot and quick — not good to sustain warmth and not the best choice for fuel in January. Nevertheless, for those shoulder seasons where a fire may help take the chill out of a house in the morning but not needed throughout the day, or for those times when a short fire is wanted, softwood works just fine. We already have our winter supply of hardwood cut and stacked. However, this is a windfall both literally and figuratively that has fallen almost in our lap. Paul Bunyan is still not convinced. BUT, my gleaning instincts will not be thwarted; I’m getting tired of the fray; and I have work to do. I use my best argument. Should have thought of it years ago, as not only is it a clincher for today’s debate, but it may very well have ended the probability of any future arguments. Mr. Bunyan is now looking forward to burning basswood in the outdoor furnace this fall. The choice was either that or cutting our firewood would be his responsibility from now on. Alyce enjoys hearing from SCOOP readers. Please email her at alyce@ gorter.ca.

Try our great selection of

Ask our butchers for