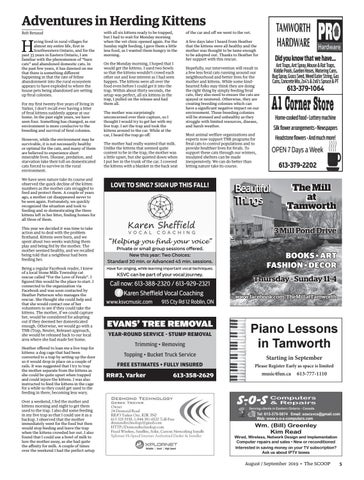 aving lived in rural villages for almost my entire life, first in Southwestern Ontario, and for the past 33 years in Eastern Ontario, I am familiar with the phenomenon of “barn cats” and abandoned domestic cats. In the past few years, it has dawned on me that there is something different happening in that the rate of feline abandonment into the rural ecosystem appears to have exploded to where the house pets being abandoned are setting up feral colonies. For my first twenty-five years of living in Yarker, I don’t recall ever having a litter of feral kittens suddenly appear at our home. In the past eight years, we have seen four. Something has changed, as our environment is more conducive to the breeding and survival of feral colonies. However, while the environment may be survivable, it is not necessarily healthy or optimal for the cats, and many of them are believed to experience short miserable lives. Disease, predation, and starvation take their toll on domesticated cats forced to survive in the rural environment. We have seen nature take its course and observed the quick decline of the kitten numbers as the mother cats struggled to feed and protect them. A couple of years ago, a mother cat disappeared never to be seen again. Fortunately, we quickly recognized the situation and took to feeding and re-domesticating the three kittens left in her litter, finding homes for all three of them. This year we decided it was time to take action and to deal with the problem firsthand. Kittens were born, and we spent about two weeks watching them play and being fed by the mother. The mother seemed healthy, and we recalled being told that a neighbour had been feeding her. Being a regular Facebook reader, I knew of a local Stone Mills Township cat rescue called “For the Love of Ferals”. I figured this would be the place to start. I connected to the organization via Facebook and was soon contacted by Heather Patterson who manages the rescue. She thought she could help and that she would contact one of her volunteers to see if they could take the kittens. The mother, if we could capture her, would be considered for adopting out if they deemed her domesticated enough. Otherwise, we would go with a TNR (Trap, Neuter, Release) approach, she would be released back to our local area where she had made her home. Heather offered to loan me a live trap for kittens: a dog cage that had been converted to a trap by setting up the door so it would drop in place on a couple of rails. It was suggested that I try to trap the mother separate from the kittens as she could be quite upset when trapped and could injure the kittens. I was also instructed to feed the kittens in the cage for a while so they could get used to the feeding in there, becoming less wary. Over a weekend, I fed the mother and kittens morning and night to get them used to the trap. I also did some feeding in my live trap so that I could use it as a backup. I observed that the mother immediately went for the food but then would stop feeding and leave the trap when the kittens crowded her out. I also found that I could use a bowl of milk to lure the mother away, as she had quite the affinity for milk. A couple of times over the weekend I had the perfect setup

with all six kittens ready to be trapped, but I had to wait for Monday morning when the vet clinic opened again. For the Sunday night feeding, I gave them a little less food, as I wanted them hungry in the morning. On the Monday morning, I hoped that I would get the kittens. I used two bowls so that the kittens wouldn’t crowd each other out and lose interest as I had seen happen. The kittens were all over the food even before I could get it into the trap. Within about thirty seconds, the setup was perfect, all six kittens in the trap, I pulled on the release and had them all. The mother was surprisingly unconcerned over their capture, so I thought I would try to get her with my live trap. I set the trap and took the kittens around to the car. While at the car, I heard the trap go off. The mother had really wanted that milk. Unlike the kittens that seemed quite content to be in the trap, the mother was a little upset, but she quieted down when I put her in the trunk of the car. I covered the kittens with a blanket in the back seat

of the car and off we went to the vet. A few days later I heard from Heather that the kittens were all healthy and the mother was thought to be tame enough to be adopted out. Thanks to Heather for her support with this rescue.

Did you know that we have...

Hopefully, our intervention will result in a few less feral cats running around our neighbourhood and better lives for the mother and kittens. While some kindhearted folks may think they are doing the right thing by simply feeding feral cats, they also need to ensure the cats are spayed or neutered. Otherwise, they are creating breeding colonies which can have a significant negative impact on our environment. These breeding colonies will be stressed and unhealthy as they struggle with limited resources, disease, and harsh weather.

Most animal welfare organizations and experts now support TNR programs for feral cats to control populations and to provide healthier lives for ferals. To support these cats through our winters, insulated shelters can be made inexpensively. We can do better than letting nature take its course.

Headstone ﬂowers • And much more!

KSVC can be part of your vocal journey.