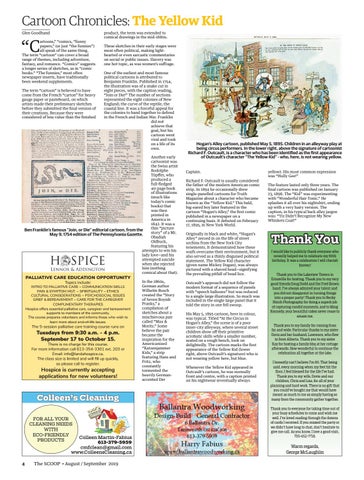 artoons,” “comics, “funny papers,” (or just “the funnies”) all speak of the same thing. The term “cartoon” can cover a broad range of themes, including adventure, fantasy, and romance. “Comics” suggests a longer series of sketches, as in “comic books.” “The funnies,” most often newspaper inserts, have traditionally been weekend supplements. The term “cartoon” is believed to have come from the French “carton” for heavy gauge paper or pasteboard, on which artists made their preliminary sketches before they submitted the final version of their creations. Because they were considered of less value than the finished

product, the term was extended to comical drawings in the mid-1880s. These sketches in their early stages were most often political, making lighthearted or even sarcastic commentaries on social or public issues. Slavery was one hot topic, as was women’s suffrage. One of the earliest and most famous political cartoons is attributed to Benjamin Franklin. Published in 1754, the illustration was of a snake cut in eight pieces, with the caption reading, “Join or Die!” The number of sections represented the eight colonies of New England; the curve of the reptile, the coastal line. It was a forceful appeal for the colonies to band together to defend in the French and Indian War. Franklin did not achieve that goal, but his cartoon went viral and took on a life of its own.

Another early cartoonist was the Swiss artist Rodolphe Töpffer, who produced a full-ﬂedged 40-page book of illustrations (much like today’s comic books) that was then printed in America in 1842. It was a thin “picture Ben Franklin’s famous “Join, or Die” editorial cartoon, from the story” of a Mr. May 9, 1754 edition of The Pennsylvania Gazette. Obadiah Oldbuck, featuring his attempts to win his lady love—and his attempted suicide when she rejected him (nothing comical about that).

There is no charge for this course. For more information call 613-354-3301 ext. 203 or Email: info@landahospice.ca. The class size is limited and will ﬁll up quickly, so please call to register.

In the 1860s, German author Wilhelm Busch created the “Story of Seven Boyish Pranks,” a compilation of sketches about a mischievous pair called “Max & Moritz.” Some believe the pair became the inspiration for the Americanized “Katzenjammer Kids,” a strip featuring Hans and Fritz, who constantly tormented the heavily Germanaccented Der

Hogan’s Alley cartoon, published May 5, 1895. Children in an alleyway play at being circus performers. In the lower right, above the signature of cartoonist Richard F. Outcault, is a character who has been identiﬁed as the ﬁrst appearance of Outcault’s character “The Yellow Kid” - who, here, is not wearing yellow. Captain. Richard F. Outcault is usually considered the father of the modern American comic strip. In 1894 he occasionally drew single-panelled cartoons for Truth Magazine about a character who became known as the “Yellow Kid.” This bald, big-eared boy later featured in the cartoon “Hogan’s Alley,” the first comic published in a newspaper on a continuing basis. It debuted on February 17, 1895, in New York World. Originally in black and white, “Hogan’s Alley” zeroed in on the life of street urchins from the New York City tenements. It demonstrated how these waifs overcame their environment, but it also served as a thinly disguised political statement. The Yellow Kid character (given name Mickey Dugan), was always pictured with a shaved head—signifying the prevailing pitfall of head lice. Outcault’s approach did not follow the modern format of a sequence of panels with “speech balloons” but was reduced to a single large illustration. So much was included in the single large panel that it told the story in one fell swoop. His May 5, 1895 cartoon, here in colour, was typical. Titled “At the Circus in Hogan’s Alley,” the scene is of a poor inner-city alleyway, where several street children show off their primitive acrobatic skills while a smaller number, seated on a rough bench, look on delightedly. The cartoon marks the first appearance of the Yellow Kid (lower right, above Outcault’s signature) who is not wearing yellow here, but blue. Whenever the Yellow Kid appeared in Outcault’s cartoon, he was normally front and centre, with a caption printed on his nightwear (eventually always

yellow). His most common expression was “Hully Gee!” The feature lasted only three years. The final cartoon was published on January 23, 1898. The “Kid” was experimenting with “Wonderful Hair Tonic.” He splashes it all over his nightshirt, ending up with a very hairy version. The caption, in his typical back alley jargon was: “Yiz Didn’t Recognize My New Whiskers Coat!”

Thank You I would like to publicly thank everyone who recently helped me to celebrate my 80th birthday. It was a celebration I will cherish forever! Thank you to the Lakeview Tavern in Erinsville for hosting. Thank you to my very good friends Doug Dodd and the Fred Brown band. I’ve always admired your talent and you did not disappoint in turning things into a proper party! Thank you to Becky Hinch Photography for doing a superb job of capturing candid moments, and to Marg Kennedy, your beautiful cakes never cease to amaze me. Thank you to my family for coming from far and wide. Particular thanks to my sister Doris and her husband, Lawrence, who flew in from Alberta. Thank you to my sister Kay for hosting a family bbq at her cottage afterwards. How wonderful to continue the celebration all together at the lake. I honestly can’t believe I’m 80. That being said, every morning when my feet hit the floor, I feel blessed for the life I’ve had. Thank you to my wife, Dovie and our children, Chris and Lisa, for all of your planning and hard work. There is no gift that you could’ve bought me that would have meant as much to me as simply having so many from the community gather together. Thank you to everyone for taking time out of your busy schedules to come and wish me well. I’ve loved reading through the dozens of cards I received. If you missed the party or we didn’t have long to chat, don’t hesitate to give me call. As you know, I love a good visit, 705-652-7718.