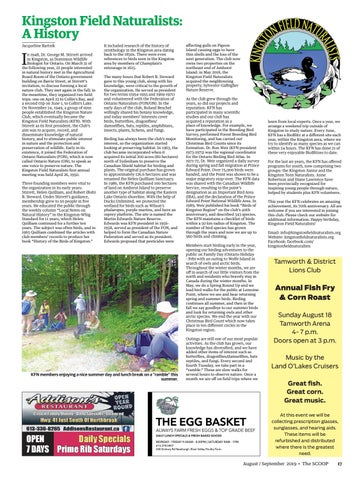 n 1948, Dr. George M. Stirrett arrived in Kingston, as Dominion Wildlife Biologist for Ontario. On March 31 of the following year, 22 people interested in natural history met in the Agricultural Board Room of the Ontario government building on Barrie Street, at Stirrett’s invitation, to discuss forming a local nature club. They met again in the fall; in the meantime, they organized two field trips: one on April 23 to Collin’s Bay, and a second trip on June 1, to Collin’s Lake. On November 24, 1949, a group of nine people established the Kingston Nature Club, which eventually became the Kingston Field Naturalists (KFN). With Stirrett as its first president, the Club’s aim was to acquire, record, and disseminate knowledge of natural history, and to stimulate public interest in nature and the protection and preservation of wildlife. Early in its existence, it joined the Federation of Ontario Naturalists (FON), which is now called Ontario Nature (ON), to speak as one voice to preserve nature. The Kingston Field Naturalists first annual meeting was held April 26, 1950. Three founding members were vital to the organization in its early years: Stirrett, Helen Quilliam, and Robert (Bob) B. Steward. Under Stirrett’s guidance, membership grew to 50 people in five years. He educated the public through the weekly column “Local Notes on Natural History” in the Kingston-Whig Standard for 11 years, which Helen Quilliam continued for a further ten years. The subject was often birds, and in 1965 Quilliam combined the articles with club members’ records to produce her book “History of the Birds of Kingston.”

It included research of the history of ornithology in the Kingston area dating back to the 1850s. There were even references to birds seen in the Kingston area by members of Champlain’s entourage in 1615. The many hours that Robert B. Steward gave to this young club, along with his knowledge, were critical to the growth of the organization. He served as president for two terms (1954-1955 and 1969-1971) and volunteered with the Federation of Ontario Naturalists (FON/ON). In the early days of the club, Roland Beschel willingly shared his botany knowledge, and today members’ interests cover birds, butterﬂies, dragonﬂies/ damselﬂies, bats, reptiles, amphibians, insects, plants, lichens, and fungi. Birding has always been the club’s major interest, so the organization started looking at preserving habitat. In 1963, the club became incorporated when it acquired its initial 200 acres (80 hectares) north of Sydenham to preserve the Canadian Shield habitat for birding and plants. The original purchase has grown to approximately 126.6 hectares and was renamed the Helen Quilliam Sanctuary. In 1986, the KFN purchased 100 hectares of land on Amherst Island to preserve another type of habitat along the Eastern Lake Ontario shoreline. With the help of Ducks Unlimited, we protected the wetland for birds such as Wilson’s phalaropes, purple martins, and have an osprey platform. The site is named the Martin Edwards Nature Reserve. Edwards was KFN president in 19561958, served as president of the FON, and helped to form the Canadian Nature Federation and served as its president. Edwards proposed that pesticides were

KFN members enjoying a nice summer day and lunch break on a “ramble” this summer.

affecting gulls on Pigeon Island causing eggs to have thin shells and the loss of the next generation. The club now owns two properties on the northeast end of Amherst Island: in May 2018, the Kingston Field Naturalists acquired the neighbouring property, Sylvester-Galbigher Nature Reserve. As the club grew through the years, so did our projects and reputation. KFN has participated in many scientific studies and our club has acquired a reputation as a place of knowledge. For example, we have participated in the Breeding Bird Survey, performed Forest Breeding Bird Monitoring, and has carried out Christmas Bird Counts since its formation. Dr. Ron Weir (KFN president 1973-1975) was the regional coordinator for the Ontario Birding Bird Atlas. In 1971-72, Dr. Weir organized a daily survey during spring and fall migration at Prince Edward Point. Over 75,000 birds were banded, and the Point was shown to be a major migratory stop-over. The KFN data was shared with the Canadian Wildlife Service, resulting in the point’s designation as an Important Bird Area (IBA), and the declaration of the Prince Edward Point National Wildlife Area. In 1989, Weir published his book “Birds of Kingston Region” on the club’s 40th anniversary, and described 343 species. The KFN maintains a checklist of birds within a 50 km radius of Kingston. The number of bird species has grown through the years and now we are up to 360 birds and climbing. Members start birding early in the year, opening our birding adventures to the public on Family Day (Ontario Holiday - Feb) with an outing to Wolfe Island in search of owls and arctic birds. Throughout the winter months, we are off in search of our little visitors from the north and residents who bravely stay in Canada during the winter months. In May, we do a Spring Round Up and we lead bird walks for the public at Lemoine Point, where we see and hear returning spring and summer birds. Birding continues all summer, and then in the fall we say goodbye to our summer birds and look for returning owls and other arctic species. We end the year with our Christmas Bird Count which now takes place in ten different circles in the Kingston region. Outings are still one of our most popular activities. As the club has grown, our knowledge has diversified, and we have added other items of interest such as butterﬂies, dragonﬂies/damselﬂies, bats reptiles, and fungi. Every second and fourth Tuesday, we take part in a “ramble.” These are slow walks for several hours to observe nature. Once a month we are off on field trips where we

learn from local experts. Once a year, we arrange a weekend trip outside of Kingston to study nature. Every June, KFN has a BioBlitz at a different site each year, within the Kingston area, where we try to identify as many species as we can within 24 hours. The KFN has done 21 of these very enjoyable BioBlitzes to date. For the last 40 years, the KFN has offered programs for youth, now comprising two groups: the Kingston Junior and the Kingston Teen Naturalists. Anne Robertson and Diane Lawrence have been provincially recognized for inspiring young people through nature, helped by students plus KFN volunteers. This year the KFN celebrates an amazing achievement, its 70th anniversary. All are welcome if you are interested in joining this club. Please check our website for additional information. Happy birthday, Kingston Field Naturalists! Email: info@kingstonfieldnaturalists.org Website: kingstonfieldnaturalists.org Facebook: facebook.com/ kingstonfieldnaturalists

Annual Fish Fry & Corn Roast Sunday August 18 Tamworth Arena 4- 7 p.m. Doors open at 3 p.m. Music by the Land O’Lakes Cruisers Great fish. Great corn. Great music. At this event we will be collecting prescription glasses, sunglasses, and hearing aids. These items will be refurbished and distributed where there is the greatest need.