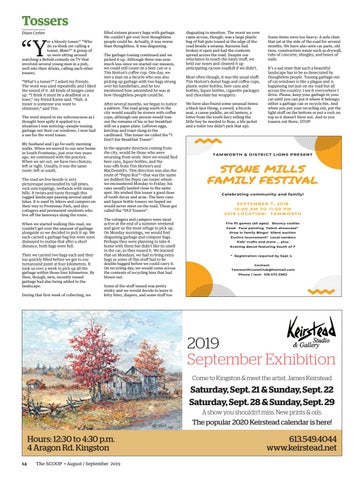 er a bloody tosser.” “Who do ya think yer calling a tosser, Mate?” A group of us were sitting around watching a British comedy on TV that involved several young men in a pub, well into their drinks, calling each other tossers. “What’s a tosser?” I asked my friends. The word was used repeatedly and I liked the sound of it. All kinds of images came up. “I think it must be a deadbeat or a loser,” my friend Karen said. “Nah. A tosser is someone you want to eliminate,” said Tim. The word stayed in my subconscious as I thought how aptly it applied to a situation I was noticing—people tossing garbage out their car windows. I now had a use for the word tosser. My husband and I go for early morning walks. When we moved to our new home in South Frontenac, just over two years ago, we continued with the practice. When we set out, we have two choices; left or right. Usually, it was the same route: left or south. The road we live beside is very picturesque surrounded by tall pines, rock outcroppings, wetlands with many hills. It twists and turns through this rugged landscape passing several small lakes. It is used by hikers and campers on their way to Frontenac Park, and also cottagers and permanent residents who live off the laneways along the route. When we started walking this road, we couldn’t get over the amount of garbage alongside so we decided to pick it up. We each carried a garbage bag but were soon dismayed to realize that after a short distance, both bags were full. Then we carried two bags each and they too quickly filled before we got to our turnaround point at four kilometres. It took us over a week to pick up all the garbage within those four kilometres. By then, though, new, recently tossed garbage had also being added to the landscape. During that first week of collecting, we

filled sixteen grocery bags with garbage. We couldn’t get over how thoughtless people could be. Actually, it was worse than thoughtless. It was disgusting. The garbage tossing continued and we picked it up. Although there was now much less since we started our mission, we could still count on a beer can or a Tim Horton’s coffee cup. One day, we met a man on a bicycle who was also picking up garbage with two bags strung over his handlebars, and he too mentioned how astonished he was at how thoughtless people could be. After several months, we began to notice a pattern. The road going south to the city would usually be strewn with coffee cups, although one person would toss out the remains of his or her breakfast still on a paper plate. Leftover eggs, ketchup and toast clung to the cardboard. This tosser we called the “I Don’t Eat Breakfast Tosser”. In the opposite direction coming from the city, would be those who were returning from work. Here we would find beer cans, liquor bottles, and the toss-offs from Tim Horton’s and MacDonald’s. This direction was also the route of “Pepsi Boy”—that was the name we dubbed the Pepsi can tosser whom we encountered Monday to Friday; his cans usually landed close to the same spot. We wished this tosser a good dose of tooth decay and acne. The beer cans and liquor bottle tossers we hoped we would never meet on the road. These got called the “DUI Tossers”. The cottagers and campers were most active at the end of a summer weekend and gave us the most refuge to pick up. On Monday mornings, we would find disgusting garbage and compost bags. Perhaps they were planning to take it home with them but didn’t like its smell in the car, so they tossed it. We learned that on Mondays, we had to bring extra bags as some of this stuff had to be double bagged before we could carry it. On recycling day, we would come across the contents of recycling bins that had blown out.

disgusting to mention. The worst we ever came across, though, was a large plastic bag of fish guts tossed at the edge of the road beside a swamp. Racoons had broken it open and had the contents spread across the road. Despite our reluctance to touch the nasty stuff, we held our noses and cleaned it up anticipating racoon roadkill if we didn’t. Most often though, it was the usual stuff: Tim Horton’s donut bags and coffee cups, plastic water bottles, beer cans and bottles, liquor bottles, cigarette packages and chocolate bar wrappers. We have also found some unusual items: a black lace thong, a sword, a bicycle seat, a canoe paddle, an oil lantern, a letter from the tooth fairy telling the little boy he needed to ﬂoss, a life jacket and a toilet (we didn’t pick that up).

Some items were too heavy: A sofa chair that sat at the side of the road for several months. We have also seen car parts, old tires, construction waste such as drywall, tubs of concrete, shingles, and boxes of nails. It’s a sad state that such a beautiful landscape has to be so desecrated by thoughtless people. Tossing garbage out of car windows is like a plague and is happening not just on my road but all across the country. I see it everywhere I drive. Please, keep your garbage in your car until you can put it where it belongs; either a garbage can or recycle bin. And when you put your recycling out, put the light stuff on the bottom or put a rock on top so it doesn’t blow out. And to you tossers out there, STOP!

Some of the stuff tossed was pretty stinky and we would decide to leave it: kitty litter, diapers, and some stuff too

The popular 2020 Keirstead calendar is here!