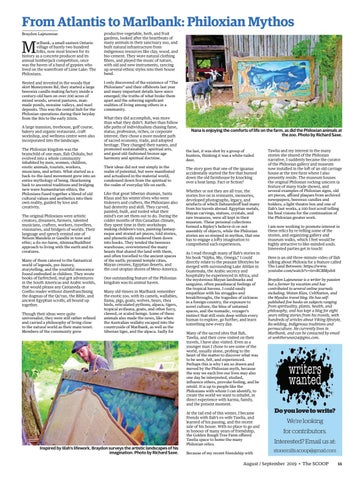 arlbank, a small eastern Ontario village of barely two hundred folks, now most known for its history as a concrete producer and its annual lumberjack competition, once was the haven of a band of gypsies who lived on the waterfront of Lime Lake: The Philoxians. Nested and invested in the woods that skirt Moneymore Rd, they started a large beeswax candle making factory inside a century-old barn on over 200 acres of mixed woods, several pastures, manmade ponds, moraine valleys, and marl deposits. This was the central hub for the Philoxian operations during their heyday from the 80s to the early 2010s. A large mansion, treehouse, golf course, bakery and organic restaurant, craft workshop, and wellness centre were also incorporated into the landscape. The Philoxian kingdom was the brainchild of one man, Ilah Chikalo, but evolved into a whole community inhabited by men, women, children, exotic animals, tourists, workers, musicians, and artists. What started as a back-to-the-land movement grew into an entire mythology of being. Hearkening back to ancestral traditions and bridging new wave humanitarian ethics, the Philoxians fused together a blend of old cultural values and aesthetics into their own reality, guided by love and creativity. The original Philoxians were artistic creators, dreamers, farmers, talented musicians, crafters, workers, travellers, visionaries, and bridgers of worlds. Their language and speech remind one of Nelson Mandela or Gandhi in tone and ethic; a do-no-harm, Ahimsa/Buddhist approach to living with the earth and its creatures. Many of them catered to the fantastical world of legends, pre-history, storytelling, and the youthful innocence found embodied in children. They wrote books of farfetched, real grit adventures in the South Americas and Arabic worlds, that would please any Castaneda or Coelho reader without disenfranchising the dogmas of the Qu’ran, the Bible, and ancient Egyptian scrolls, all bound up together. Though their ideas were quite universalist, they were still rather refined and carried a philosophy of living close to the natural world as their main tenet. Members of the community grew

productive vegetable, herb, and fruit gardens, looked after the heartbeats of many animals in their sanctuary zoo, and built natural infrastructure from indigenous resources like clay, wood, and bio-cement. They wore natural clothing fibres, and played the music of nature, with old and new instruments, syncing up several ethnic styles into their house band. I only discovered of the existence of “The Philoxians” and their offshoots last year and many important details have since emerged; the truths of what broke them apart and the sobering significant realities of living among others in a community. What they did accomplish, was more than what they didn’t. Rather than follow idle paths of individualism chasing fame, status, profession, riches, or corporate interest, they chose a more modest path of sacred economy, trade, and adopted heritage. They changed their names, and promoted sustainability, spiritual arts, and good old-fashioned bronze age harmony and spiritual doctrine. Their ideas did not rest simply in the realm of potential, but were manifested and actualized in the material world, condensed down from the spiritual to the realm of everyday life on earth. Like that great Siberian shaman, Santa Klaus and his winter elves who were tinkerers and crafters, the Philoxians also had dexterity and skill. They carved, painted, built, and tooled what their mind’s eye set them out to do. During the colder months of this Canadian climate, they spent time in their workshops making children’s toys, painting fantasyesque and storied art pieces, told stories, and phonetically rendered them down into books. They tended the beeswax warehouse, overwintered the many beasts that shared the land with them, and often travelled to the ancient spaces of the earth; pyramid temple cities, Mayan cenotes, Egyptian deserts, and the cool utopian shores of Meso-America. One outstanding feature of the Philoxian kingdom was its animal haven. Many old-timers in Marlbank remember the exotic zoo, with its camels, wallabies, llama, pigs, goats, wolves, bears, rhea birds, reticulated pythons, alpaca, tigers, tropical avifauna, goats, and other furry, clawed, or scaled beings. Some of these animals also made the news, like when the Australian wallaby escaped into the countryside of Marlbank, as well as the Siberian tiger, and the alpaca. Sadly for

Inspired by Iilah’s lifework, Braydon surveys the artistic landscapes of his imagination. Photo by Richard Saxe.

Nana is enjoying the comforts of life on the farm, as did the Philoxian animals at the zoo. Photo by Richard Saxe. the last, it was shot by a group of hunters, thinking it was a white-tailed deer. The story goes that one of the iguanas accidentally started the fire that burned down the old farmhouse by knocking over a heat lamp. Fact or fiction? Whether or not they are all true, the stories live on in remnants, memories, developed photographs, legacy, and artefacts of which Ilahzandroff had many from his travels abroad. Egyptian metals, Mayan carvings, statues, crystals, and rare treasures, were all kept in their museum. These personal collections formed a Ripley’s believe-it-or-not assembly of objects, while the Philoxian stories are so steeped in mythos, that one has to engage a lofty imagination to comprehend such experiences. As I read through many of Ilah’s stories in his book “Alpha, Mu, Omega,” I could directly relate to the peasant lifestyles he merged with surrounding Lake Atitlan in Guatemala, the Arabic secrecy and hospitality he experienced in Africa, and the mysterious Mayan landmarks and sanguine, often paradisiacal feelings of the tropical havens. I could easily empathize with his struggles and breakthroughs, the tragedies of sickness in a foreign country, the exposure to novel culture, the bliss of untamed spaces, and the nomadic, voyager’s instinct that still rests deep within every human to explore, go further, and learn something new every day. Many of the sacred sites that Ilah, Tawlia, and their crew visited on their travels, I have also visited. Even as a younger man I chose to see some of the world, usually alone, probing to the heart of the matter to discover what was to be seen, felt, and experienced. Perhaps this is why I am so drawn and moved by the Philoxian myth, because the way we each live our lives may also one day be interpreted, studied, inﬂuence others, provoke feeling, and be retold. It is up to people like the Philoxians with whom I can identify, to create the world we want to inhabit, in direct experience with karma, family, and the present moment. At the tail end of this winter, I became friends with Ilah’s ex-wife Tawlia, and learned of his passing, and the recent sale of his house. With no place to go and in honour of many years of friendship, the Golden Bough Tree Farm offered Tawlia space to home the many Philoxian relics. Because of my recent friendship with

Tawlia and my interest in the many stories she shared of the Philoxian narrative, I suddenly became the curator of the Philoxian gallery and museum now installed in the loft of an old carriage house at the tree farm where I also presently reside. The museum houses the original Philoxian rocking unicorn (a feature of many trade shows), and several examples of Philoxian signs, old art pieces, affixed plaques from archived newspapers, beeswax candles and holders, a light theatre box and one of Ilah’s last works, a 100 foot scroll telling his final visions for the continuation of the Philoxian greater work. I am now working to promote interest in these relics by re-telling some of the stories, and organizing gallery and museum walks, which I feel would be highly attractive to like-minded souls. Interested parties get in touch! Here is an old three-minute video of Ilah talking about Philoxia for a feature called The Land Between: https://www. youtube.com/watch?v=0rvRCBMjxh8 Braydon Lajeunesse is a writer by passion but a farmer by vocation and has contributed to several online journals including; Wotan Klan, CvltNation, and the Myadzo travel blog. He has selfpublished ﬁve books on subjects ranging from spirituality, plants, health, and philosophy, and has kept a blog for eight years telling stories from his travels, with hundreds of articles about Viking lifestyle, Re:wilding, Indigenous traditions and permaculture. He currently lives in Marlbank, and can be contacted by email at seektherunes24@gmx.com.

Do you love to write? We’re looking for contributors. Interested? Email us at: stonemills.scoop@gmail.com