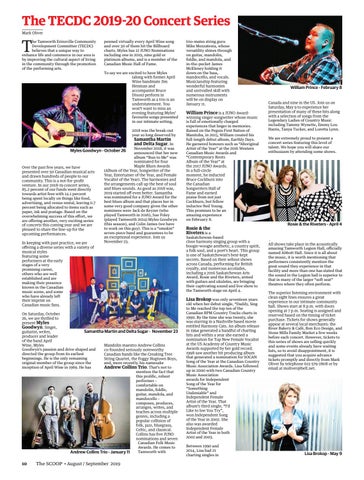 he Tamworth Erinsville Community Development Committee (TECDC) believes that a unique way to enhance life and commerce in our area is by improving the cultural aspect of living in the community through the promotion of the performing arts.

penned virtually every April Wine song and over 30 of them hit the Billboard charts. Myles has 12 JUNO Nominations including one in 2019, nine gold or platinum albums, and is a member of the Canadian Music Hall of Fame. To say we are excited to have Myles (along with former April Wine bandmate Jim Henman and accompanist Bruce Dixon) perform in Tamworth as a trio is an understatement. You won’t want to miss an evening featuring Myles’ favourite songs presented in our intimate setting. 2018 was the break-out year so long deserved by

Samantha Martin and Delta Sugar. In

November 2018, it was announced that her new album “Run to Me” was nominated for four Maple Blues Awards (Album of the Year, Songwriter of the Year, Entertainer of the Year, and Female Vocalist of the Year). The harmonies and the arrangements call up the best of soul and blues sounds. As good as 2018 was, 2019 started off even better. Samantha was nominated for a JUNO Award for the best blues album and that places her in some very good company given the other nominees were Jack de Keyzer (who played Tamworth in 2016), Sue Foley (played Tamworth 2014) Myles Goodwyn (this season), and Colin James (we have to work on this guy). This is a “smokin” seven-piece band and guarantees to be an exceptional experience. Join us November 23.

Over the past few years, we have presented over 50 Canadian musical acts and drawn hundreds of people to our community. This is a not-for-profit venture. In our 2018-19 concert series, 85.2 percent of our funds went directly towards artist fees with 14.1 percent being spent locally on things like food, advertising, and venue rental, leaving 0.7 percent being allocated to items such as paper, ink and postage. Based on the overwhelming success of this effort, we are offering another, very exciting series of concerts this coming year and we are pleased to share the line-up for the upcoming performances. In keeping with past practice, we are offering a diverse series with a variety of musical styles featuring some performers at the early stages of a very promising career, others who are well established and are making their presence known in the Canadian music scene, and some who have already left their imprint on Canadian music fans.

On Saturday, October 26, we are thrilled to present Myles Goodwyn. Singer, Samantha Martin and Delta Sugar - November 23 guitarist, writer, producer and leader of the band April Wine, Myles Mandolin maestro Andrew Collins Goodwyn’s passion and drive shaped and co-founded seriously noteworthy directed the group from its earliest Canadian bands like the Creaking Tree beginnings. He is the only remaining String Quartet, the Foggy Hogtown Boys, original member of the group since the and, more recently, his namesake inception of April Wine in 1969. He has Andrew Collins Trio. That’s not to mention the fact that this prolific, robust performer – comfortable on mandolin, fiddle, guitar, mandola, and mandocello – composes, produces, arranges, writes, and teaches across multiple genres, including a popular collision of folk, jazz, bluegrass, Celtic, and classical. Collins has five JUNO nominations and seven Canadian Folk Music Awards. He comes to Tamworth with Andrew Collins Trio - January 11

trio-mates string guru Mike Mezzatesta, whose versatility shines through on guitar, mandolin, fiddle, and mandola, and in-the-pocket James McEleney holding it down on the bass, mandocello, and vocals. Musicianship featuring wonderful harmonies and unrivalled skill with numerous instruments will be on display on January 11.

William Prince is a JUNO Awardwinning singer-songwriter whose music is full of emotionally charged experiences that linger in memories. Raised on the Peguis First Nation of Manitoba, in 2015, William created his full-length debut album, Earthly Days. He garnered honours such as “Aboriginal Artist of the Year” at the 2016 Western Canadian Music Awards and “Contemporary Roots Album of the Year” at the 2017 JUNO Awards. In a full-circle moment, he inducted Bruce Cockburn into the Canadian Songwriters Hall of Fame and earned praise from not just Cockburn, but fellow inductee Neil Young. This promises to be an amazing experience on February 8. Rosie & the Riveters is a

Saskatchewan-based close harmony singing group with a boogie-woogie aesthetic, a country spirit, a folk soul, and a poet’s heart. This group is one of Saskatchewan’s best-kept secrets. Based on their sellout shows across Canada, performing for British royalty, and numerous accolades, including a 2016 Saskatchewan Arts Award, Rosie and the Riveters, armed with guitars and ukuleles, are bringing their captivating sound and live show to the Tamworth stage on April 4.

Lisa Brokop was only seventeen years

old when her debut single, “Daddy, Sing to Me reached the top ten of the Canadian RPM Country Tracks charts in 1990. By the time she was twenty, she was starring in a Nashville based movie entitled Harmony Cats. An album release in 1994 generated a handful of charting hits and within a year she earned a nomination for Top New Female Vocalist at the US Academy of Country Music Awards supported by her gold record. 1998 saw another hit producing album that generated a nomination for SOCAN Song of the Year at the Canadian Country Music Association Awards. Lisa followed up in 2000 with two Canadian Country Music Association awards for Independent Song of the Year for “Something Undeniable” and Independent Female Artist of the Year. That album’s third single, “I’d Like to See You Try”, won Independent Song of the Year in 2002. She also was awarded Independent Female Artist of the Year in both 2002 and 2003. Between 1990 and 2014, Lisa had 21 charting singles in

William Prince - February 8 Canada and nine in the US. Join us on Saturday, May 9 to experience her presentation of many of these hits along with a selection of songs from the Legendary Ladies of Country Music including Tammy Wynette, Emmy Lou Harris, Tanya Tucker, and Loretta Lynn. We are extremely proud to present a concert series featuring this level of talent. We hope you will share our enthusiasm by attending some shows.

Rosie & the Riveters - April 4 . All shows take place in the acoustically amazing Tamworth Legion Hall, officially named Abbott Hall. Since it is all about the music, it is worth mentioning that performers consistently mention the great sound they experience in that facility and more than one has stated that the sound in the Legion hall is superior to that in many of the larger “soft seat” theatres where they often perform. The superior listening environment with clean sight lines ensures a great experience in our intimate community hall. Shows start at 8 p.m. with doors opening at 7 p.m. Seating is assigned and reserved based on the timing of ticket purchase. Tickets for shows generally appear at several local merchants: the River Bakery & Café, Bon Eco Design, and Stone Mills Family Market a few weeks before each concert. However, tickets to this series of shows are selling quickly and some events already have waiting lists, so to avoid disappointment, it is suggested that you acquire advance tickets promptly and directly from Mark Oliver by telephone 613-379-2808 or by email at moliver@bell.net.