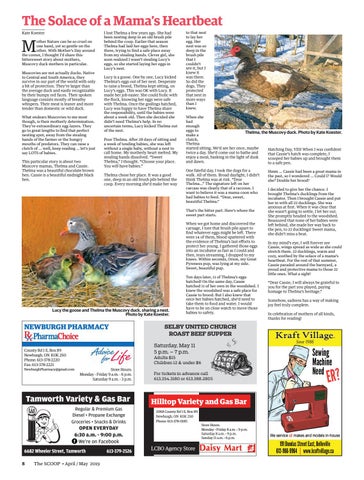 The Solace of a Mama’s Heartbeat Kate Koester

other Nature can be so cruel on one hand, yet so gentle on the other. With Mother’s Day around the corner, I thought I’d share this bittersweet story about mothers, Muscovy duck mothers in particular. Muscovies are not actually ducks. Native to Central and South America, they survive in our part of the world with only a bit of protection. They’re larger than the average duck and easily recognizable by their bumpy red faces. Their spoken language consists mostly of breathy whispers. Their meat is leaner and more tender than domestic or wild duck. What endears Muscovies to me most though, is their motherly determination. They’re extraordinary egg-layers. They go to great lengths to find that perfect nesting spot, away from the stealing hands of the farmer or the hungry mouths of predators. They can raise a clutch of … well, keep reading … let’s just say LOTS of babies. This particular story is about two Muscovy mamas, Thelma and Cassie. Thelma was a beautiful chocolate brown hen. Cassie is a beautiful midnight black hen.

I lost Thelma a few years ago. She had been nesting deep in an old brush pile behind the coop. Earlier that season Thelma had laid her eggs here, then there, trying to find a safe place away from my stealing hands. Clever girl, she soon realized I wasn’t stealing Lucy’s eggs, so she started laying her eggs in Lucy’s nest. Lucy is a goose. One by one, Lucy kicked Thelma’s eggs out of her nest. Desperate to raise a brood, Thelma kept sitting, on Lucy’s eggs. This was OK with Lucy. It made her job easier. She could frolic with the flock, knowing her eggs were safe with Thelma. Once the goslings hatched, Lucy was happy to have Thelma share the responsibility, until the babies were about a week old. Then she decided she didn’t need Thelma’s help. In no uncertain terms, Lucy kicked Thelma out of the nest. Poor Thelma. After 28 days of sitting and a week of tending babies, she was left without a single baby, without a nest to call home. My motherly heart melted. My stealing hands dissolved. “Sweet Thelma,” I thought. “Choose your place. You will have babies.” Thelma chose her place. It was a good one, deep in an old brush pile behind the coop. Every morning she’d make her way

to that nest to lay her egg. Her nest was so deep in the brush pile that I couldn’t see it, but I knew it was there. So did the dogs. They protected that nest in more ways than I knew. When she had enough eggs to Thelma, the Muscovy duck. Photo by Kate Koester. make a clutch, Thelma started sitting. We’d see her once, maybe Hatching Day, YES! When I was confident twice a day. She’d come out to bathe and that Cassie’s hatch was complete, I enjoy a meal, basking in the light of dusk scooped her babies up and brought them and dawn. to a safe pen. One fateful day, I took the dogs for a walk. All of them. Broad daylight, I didn’t think Thelma was at risk. “Dear Thelma…” The signature left on her carcass was clearly that of a raccoon. I want to believe it was a mama coon who had babies to feed. “Dear, sweet, beautiful Thelma.” That’s the bitter part. Here’s where the sweet part starts. When we got home and discovered the carnage, I tore that brush pile apart to find whatever eggs might be left. There were 14 of them, blood-spattered with the evidence of Thelma’s last efforts to protect her young. I gathered those eggs into an incubator as fast as I could and then, tears streaming, I dropped to my knees. Within seconds, Orion, my Great Pyrenees pup, was lying at my side. Sweet, beautiful pup.

Lucy the goose and Thelma the Muscovy duck, sharing a nest. Photo by Kate Koester.

Ten days later, 11 of Thelma’s eggs hatched! On the same day, Cassie hatched 11 of her own in the woodshed. I knew the woodshed was a safe place for Cassie to brood. But I also knew that once her babies hatched, she’d need to take them to food and water. I would have to be on close watch to move those babies to safety.

Hmm … Cassie had been a great mama in the past, so I wondered … Could I? Would she? Double her brood? I decided to give her the chance. I brought Thelma’s ducklings from the incubator. Then I brought Cassie and put her in with all 22 ducklings. She was anxious at first. When it was clear that she wasn’t going to settle, I let her out. She promptly headed to the woodshed. Reassured that none of her babies were left behind, she made her way back to the pen, to 22 ducklings! Sweet mama, she didn’t miss a beat. In my mind’s eye, I will forever see Cassie, wings spread as wide as she could stretch them. 22 ducklings, warm and cozy, soothed by the solace of a mama’s heartbeat. For the rest of that summer, Cassie paraded around the barnyard, a proud and protective mama to those 22 little ones. What a sight! “Dear Cassie, I will always be grateful to you for the part you played, paying homage to Thelma’s heritage.” Somehow, sadness has a way of making joy feel truly complete. In celebration of mothers of all kinds, thanks for reading!