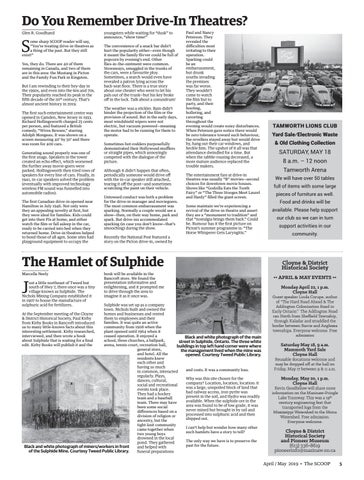 ome sharp SCOOP reader will say, “You’re treating drive-in theatres as a thing of the past. But they still exist!” Yes, they do. There are 40 of them remaining in Canada, and two of them are in this area: the Mustang in Picton and the Family Fun Park in Kingston.

But I am rewinding to their hey-day in the 1950s, and even into the 60s and 70s. Their popularity reached its peak in the fifth decade of the 20th century. That’s almost ancient history in 2019. The first such entertainment centre was opened in Camden, New Jersey in 1933. Richard Hollingsworth charged 25 cents per person, and featured a British comedy, “Wives Beware,” starring Adolph Mongeau. It was shown on a screen measuring 40’ by 50’ and there was room for 400 cars. Generating sound properly was one of the first snags. Speakers in the tower created an echo effect, which worsened the further away movie-goers were parked. Hollingsworth then tried rows of speakers for every line of cars. Finally, in 1941, in-car speakers solved the problem (eventually with improved technology wireless FM sound was funnelled into automobile radios). The first Canadian drive-in opened near Hamilton in July 1946. Not only were they an appealing novelty at first, but they were ideal for families. Kids could get into their PJs at home, and either watch the film or fall asleep in the car, ready to be carried into bed when they returned home. Drive-in theatres helped to bond those of all ages. Some sites had playground equipment to occupy the

youngsters while waiting for “dusk” to announce, “show time!” The convenience of a snack bar didn’t hurt the popularity either—even though it meant the family flivver could be full of popcorn by evening’s end. Other flies-in-the-ointment were common. Stowaways, smuggled in the trunks of the cars, were a favourite ploy. Sometimes, a search would even have revealed a patron lying across the back-seat floor. There is a true story about one cheater who went to let his pals out of the trunk—but his key broke off in the lock. Talk about a conundrum! The weather was a stickler. Rain didn’t hinder the projection of the film or the provision of sound. But in the early days, most windshield wipers were not electric, but vacuum powered—meaning the motor had to be running for them to operate. Sometimes hot-rodders purposefully demonstrated their Hollywood muﬄers or straight pipes, which annoyingly competed with the dialogue of the picture. Although it didn’t happen that often, periodically someone would drive off with the in-car speaker still attached, tearing it off the post—and sometimes scratching the paint on their vehicle.

Paul and Nancy Peterson. They revealed the difficulties most irritating to their operation. Sparking could be an embarrassment, but drunk youths invading the premises was far worse. They wouldn’t come to watch the film but to party, and their hooting, hollering, and cavorting throughout the evening would create noisy disturbances. When Peterson gave notice there would be zero tolerance toward such behaviour, the revellers stayed away but would drive by, hang out their car windows, and heckle him. The upshot of it all was that attendance dwindled for a time. But when the rabble-rousing decreased, a more mature audience replaced the trouble makers. The entertainment fare at drive-in theatres was usually “B” movies—second choices for downtown movie houses. Shows like “Godzilla Eats the Tooth Fairy” or “The Three Stooges Meet Laurel and Hardy” filled the giant screen.

Untoward conduct was both a problem for the drive-in manager and moviegoers. Some maintain we’re experiencing a The most common embarrassment was revival of the drive-in theatre and assert sparking. Normally a couple would see a they are a “monument to tradition” and show—then, on their way home, park and that “nostalgia brings them back.” Could spark. But drive-ins accommodated be. Rumour has it the first picture on sparking (in case you don’t know—that’s Search (Advanced) >> Results >> Details >> Full Image Picton’s summer programme is: “The smooching) during the show. Search: Horse Whisperer Gets Laryngitis.” Streetview of Sulphide Recently the National Post featured a story on the Picton drive-in, ownedsmall by(640 x 480) default (1000 x 900) large (1600 x 1000) extra large (2400 x 1200)

SATURDAY, MAY 18 8 a.m. – 12 noon Tamworth Arena We will have over 50 tables full of items with some large pieces of furniture as well. Food and drinks will be available. Please help support our club so we can in turn support activities in our community.

The Hamlet of Sulphide Marcella Neely

ust a little northeast of Tweed but south of Hwy 7, there once was a tiny village known as Sulphide. The Nichols Mining Company established it in 1907 to house the manufacture of sulphuric acid for fertilizers.

book will be available in the Bancroft store. We found the presentation informative and enlightening, and it prompted me to drive through the area to imagine it as it once was.

Sulphide was set up as a company town. Nichols built and owned the homes and businesses and rented At the September meeting of the Cloyne them to employees and their & District Historical Society, Paul Kirby families. It was quite an active from Kirby Books in Bancroft introduced Search (Advanced) >> What's New >> Details >> Full Image community from 1908 when the us to many little-known facts about this Search: plant opened until 1964 when it interesting settlement. Kirby researched, Workers in front of Building Sulphide Mine a book ceased operation. It enjoyed a interviewed, andatthen wrote Black and white photograph of the main small (640 x 480) default (1000 x 900) large (1600 x 1000) extra large (2400 x 1200) three churches, a ballpark, school, about Sulphide that is waiting for a final street in Sulphide, Ontario. The three white arena, tennis court, recreation hall, edit. Kirby Books will publish it and the buildings in top left hand corner were where general store, the management lived when the mine was and hotel. All the opened. Courtesy Tweed Public Library. residents knew each other and having so much and costs. It was a community loss. in common, interacted regularly. Plays, Why was this site chosen for the dances, cultural, company? Location, location, location: it social and recreational was a large, unspoiled block of land that events took place. had railway access, iron pyrite was They had a hockey present in the soil, and Hydro was readily team and a baseball available. When the sulphide ore in the team. There may have area was found to be of low grade, it was been some social never mined but brought in by rail and differences based on a processed into sulphuric acid and then division of religion or shipped out. ancestry, but the tight-knit community I can’t help but wonder how many other came together when such hamlets have a story to tell? two young boys drowned in the local The only way we have is to preserve the pond. They gathered past for the future. Black and white photograph of miners/workers in front and helped with of the Sulphide Mine. Courtesy Tweed Public Library. funeral preparations Go

Guest speaker Linda Corupe, author of “The Hard Road Ahead & The Addington Colonization Road in Early Ontario.” The Addington Road ran North from Sheﬃeld Township, through Kaladar and straddled the border between Barrie and Anglesea townships. Everyone welcome. Free admission

Reusable donations welcome and may be dropped oﬀ at the hall on Friday, May 17 between 9 & 11 a.m.

Kevin Goodfellow will share more information on the Mazinaw-Pringle Lake Tramway. This was a 19th century engineering feat that transported logs from the Mississippi Watershed to the Moira Watershed. Free admission. Everyone welcome.