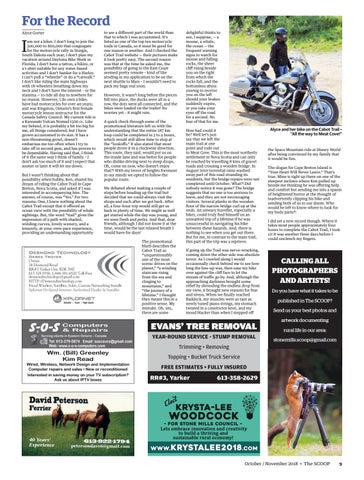 For the Record Alyce Gorter

am not a biker. I don’t long to join the 500,000 to 800,000 that congregate for the motorcycle rally in Sturgis, South Dakota each year; I don’t plan my vacation around Daytona Bike Week in Florida; I don’t have a tattoo, a bikini, or a t-shirt suitable for any water-based activities and I don’t hanker for a Harley. I can’t pull a “wheelie” or do a “catwalk.” I don’t like riding the main highways with 18-wheelers breathing down my neck and I don’t have the interest – or the stamina — to ride all day to nowhere for no reason. However, I do own a bike; have had motorcycles for over 40 years; and was Kingston, Ontario’s first female motorcycle lesson instructor for the Canada Safety Council. My current ride is a Kawasaki Vulcan Nomad 1500 cc. Like my behind, it is probably a bit too big for me, all things considered, but I have grown accustomed to its size. It has a non-threatening growl, doesn’t embarrass me too often when I try to take off in second gear, and has proven to be dependable. Having said that, I think of it the same way I think of family – I don’t ask too much of it and I expect that sooner or later it will let me down. But I wasn’t thinking about that possibility when hubby, Ken, shared his dream of riding the Cabot Trail in Cape Breton, Nova Scotia, and asked if I was interested in accompanying him. The answer, of course, was “Yes.” For two reasons: One, I knew nothing about the Cabot Trail except that it offered an ocean view with the possibility of whale sightings. But, the word “trail” gives the impression of a path with shaded, winding curves, lovely scenery, and a leisurely, at-your-own-pace experience, providing an undemanding opportunity

to see a different part of the world than that to which I was accustomed. It’s listed as one of the top ten motorcycle trails in Canada, so it must be good for one reason or another. And I checked the Cabot Trail website — their pictures make it look pretty easy. The second reason was that at the time he asked me, the possibility of going to the East Coast seemed pretty remote – kind of like sending in my application to be on the next shuttle to Mars – I wouldn’t need to pack my bags real soon. However, it wasn’t long before the pieces fell into place, the ducks were all in a row, the dots were all connected, and the bikes were loaded on the trailer! No worries yet – it might rain. A quick check through some of the promotional literature left us with the understanding that the entire 287 km loop could be completed in 3 to 4 hours, which would still allow time to stop at the “lookoffs.” It also stated that most people drove it in a clockwise direction. This route, they said, would put us on the inside lane and was better for people who dislike driving next to steep drops. Oh, come on now, who doesn’t enjoy that?! With my terror of heights foremost in our minds we opted to follow the popular route. We debated about making a couple of stops before heading up the trail but decided that we could always visit the shops and such after we got back. After all, a four-hour trip would still get us back in plenty of time. We might as well get started while the day was young, and we were fresh and perky. And that, dear friends, although I did not know it at the time, would be the last relaxed breath I would have for days! The promotional blurb describes the Cabot Trail as “unquestionably one of the most scenic drives on the planet,” “a winding staircase rising from the sea and clinging to mountains,” and “the journey of a lifetime.” I thought they meant this in a positive sense. My mistake. Oh, yes, there are some

delightful thinks to see, I suppose, — a moose, a whale, the ocean — the frequent warning signs to watch for moose and falling rocks, the sheer cliff rising beside you on the right from which the rocks fall, and the bottomless abyss yawing to receive you on the left should your brakes suddenly expire, or you take your eyes off the road for a second. No fear of that for me. How bad could it be? Well let’s just say that we left the main trail at one point and rode out to Meat Cove. This is the most northerly settlement in Nova Scotia and can only be reached by travelling 8 kms of gravel roads and crossing a wooden bridge. In August 2010 torrential rains washed away part of this road stranding its residents, but the bridge repairs were not completed until October. What?! Did nobody notice it was gone? The bridge suggests that no one is too anxious to leave, and they are not encouraging visitors. Several planks in the wooden floor of the narrow bridge curl up at the ends. An unwary traveller, especially a biker, could truly find himself on an unwanted trip of a lifetime if he was unsuccessful in navigating his bike between these hazards. And, there is nothing to see when you get out there. But for me, in contrast to the main trail, this part of the trip was a reprieve. If going up the Trail was nerve-wracking, coming down the other side was absolute terror. As I crawled along I would occasionally check behind me to see how long the line-up was, then ease my bike over against the cliff face to let the stream of traffic go by. And, although the approaching darkness brought some relief by shrouding the endless drop from my view, it brought new reasons for fear and stress. When we finally reached Baddeck, my muscles were as taut as newly tuned piano strings, my stomach twisted in a constrictor knot, and my mood blacker than when I stepped off

Alyce and her bike on the Cabot Trail – “All the way to Meat Cove!” the Space Mountain ride at Disney World after being convinced by my family that it would be fun. The slogan for Cape Breton Island is “Your Heart Will Never Leave.” That’s true. Mine is right up there on one of the steepest inclines where Ken pulled up beside me thinking he was offering help and comfort but sending me into a spasm of heightened horror at the thought of inadvertently clipping his bike and sending both of us to our doom. Who would be left to know where to look for my body parts?! I did set a new record though. Where it takes most people approximately four hours to complete the Cabot Trail, I took 12! It was another three days before I could unclench my fingers.

CaLLiNG aLL PHoToGraPHers aNd arTisTs! Do you have what it takes to be published in The SCOOP? Send us your best photos and artwork documenting rural life in our area: stonemills.scoop@gmail.com