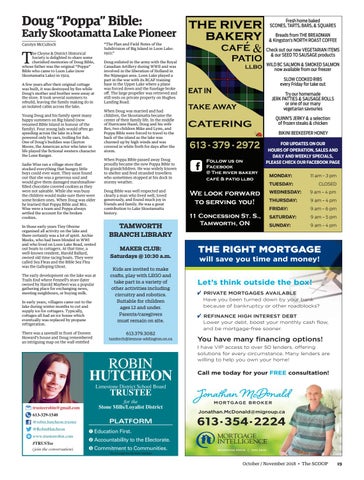 he Cloyne & District Historical Society is delighted to share some cherished memories of Doug Bible, whose father was the original “Poppa” Bible who came to Loon Lake (now Skootamatta Lake) in 1924. A few years after their original cottage was built, it was destroyed by fire while Doug’s mother and brother were away at the store. It took several summers to rebuild, leaving the family making do in an isolated cabin across the lake. Young Doug and his family spent many happy summers on Big Island (now renamed Bible Island in honour of the family). Four young lads would often go speeding across the lake in a boat powered only by oars, trolling for fish. One of Doug’s buddies was Clayton Moore, the American actor who later in life played the fictional western character the Lone Ranger. Sadie Wise ran a village store that stocked everything that hungry little boys could ever want. They soon found out that she was a generous soul and would give them damaged marshmallowfilled chocolate covered cookies as they were not saleable. While she was busy the children would make sure there were some broken ones. When Doug was older he learned that Poppa Bible and Mrs. Wise were a team and Poppa always settled the account for the broken cookies. In those early years Tiny Oborne organised all activity on the lake and there certainly was a lot of spirit. Archie Meeks, who had been blinded in WWI and who lived on Loon Lake Road, rented out boats to cottagers. At that time, a well-known resident, Harold Ballard, owned old time racing boats. They were called Sea Fleas and the Bible Sea Flea was the Galloping Ghost. The early development on the lake was at Trails End where Fennell’s store (later owned by Harold Maybee) was a popular gathering place for exchanging news, meeting neighbours, or buying milk. In early years, villagers came out to the lake during winter months to cut and supply ice for cottagers. Typically, cottages all had an ice house which eventually was replaced by propane refrigeration. There was a sawmill in front of Doreen Howard’s house and Doug remembered an intriguing map on the wall entitled

“The Plan and Field Notes of the Subdivision of Big Island in Loon Lake: 1922.”

Check out our new VEGETARIAN ITEMS & our SEED TO SAUSAGE products

Doug enlisted in the army with the Royal Canadian Artillery during WWII and was involved in the liberation of Holland in the Nijmegan area. Loon Lake played a part in the war with its RCAF training base in the Upper Lake where a plane was forced down and the fuselage broke off. The large propeller was retrieved and still rests on private property on Hughes Landing Road.

When Doug was married and had children, the Skootamatta became the center of their family life. In the middle of Hurricane Hazel, Doug and his wife Bev, two children Mike and Lynn, and Poppa Bible were forced to travel to the back of the island as the lake was churned up by high winds and was covered in white froth for days after the storm.

When Poppa Bible passed away Doug proudly became the new Poppa Bible to his grandchildren. He was widely known to shelter and feed stranded travellers who sometimes stopped at his dock in stormy weather. Doug Bible was well respected and clearly a man who lived well, loved generously, and found much joy in friends and family. He was a great contribution to Lake Skootamatta history.

TAMWORTH BRANCH LIBRARY MAKER CLUB: Saturdays @ 10:30 a.m. Kids are invited to make crafts, play with LEGO and take part in a variety of other activities including circuitry and robotics. Suitable for children ages 12 and under. Parents/caregivers must remain on site. 613.379.3082 tambrch@lennox-addington.on.ca

FOR UPDATES ON OUR HOURS OF OPERATION, SALES AND DAILY AND WEEKLY SPECIALS, PLEASE CHECK OUR FACEBOOK PAGE

We look forward to serving you! 11 Concession St. S., Tamworth, ON

Let’s think outside the box! 4

This ad is approved by Robin Hutcheon