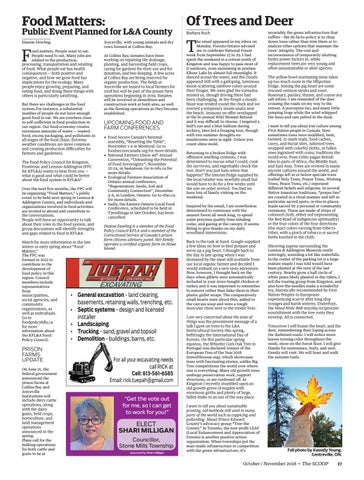 ood matters. People want to eat. People need to eat. Many jobs are related to the production, processing, transportation and retailing of food. What people eat has health consequences — both positive and negative, and how we grow food has implications for the ecology. Many people enjoy growing, preparing, and eating food, and doing these things with others is particularly satisfying. But there are challenges in the food system.For instance, a substantial number of people do not have enough good food to eat. We are nowhere close to self-sufficient in food production in our region. Our food economy creates enormous amounts of waste — wasted food, excess packaging, and pollutants in all stages of the food chain. Extreme weather conditions are more common and creating production difficulties for farmers and gardeners. The Food Policy Council for Kingston, Frontenac and Lennox-Addington (FPC for KFL&A) wants to hear from you — what is good and what could be better about the food system in KFL&A? Over the next few months, the FPC will be organizing “Food Matters,” a public event to be held next spring in Lennox & Addington County, and individuals and organizations involved in food activities are invited to attend and contribute to the conversations. People will have an opportunity to talk about their roles in the food system, and group discussions will identify strengths and gaps related to food in KFL&A. Watch for more information in the late winter or early spring about “Food Matters.” The FPC was formed in 2012 to contribute to the development of food policy in this region. Council members include representatives from municipalities, social agencies, and community organizations, as well as individuals. Go to foodpolicykfla.ca for more information about the KFL&A Food Policy Council.

Joyceville, with young animals and dry cows housed at Collins Bay. At Collins Bay, inmates have been working on repairing tile drainage, planting, and harvesting field crops, caring for gardens for their use and for donation, and bee-keeping. A few acres at Collins Bay are being reserved for organic production. The fields at Joyceville are leased to local farmers for 2018 but will be part of the prison farm operations beginning in 2019. Inmates will be involved in demolition and construction work at both sites, as well as the farming operations as they become established.

Dianne Dowling is a member of the Food Policy Council KFLA and a member of the Correctional Service of Canada’s prison farm citizens advisory panel. Her family operates a certified organic farm on Howe Island.

PriSon farmS uPdatE On June 21, the federal government announced the prison farms at Collins Bay and Joyceville Institutions will include dairy cattle operations, along with the dairy goats, field crops, horticulture, and land management operations announced in the spring. Plans call for the milking operations for both cattle and goats to be at

Of Trees and Deer Barbara Roch

he email appeared in my inbox on Monday. Forests Ontario advised me to celebrate National Forest week from September 23 to 29. I had spent the weekend in a retreat north of Kingston and was happy to pass most of it outdoors, even swimming in pristine Elbow Lake by almost full moonlight. It danced across the water, and the clouds appeared still with a galloping, luminous moon scattering rainbow colors around their fringes. We were glad the tornados missed us, though driving there had been challenging. At the firepit a steady blaze was tended round the clock and we erected a temporary steam sauna near the beach. Sessions on offer overlapped at the bi-annual Wild Women Retreat and it was difficult to choose. I targeted a bull’s eye and a blue balloon during archery, later led a foraging tour, though with two summer droughts no mushrooms were in sight. Unless you count slime mold. Returning to a broken fridge with offensive smelling contents, I was determined to rescue what I could, cook the survivors, and regrettably chuck the rest. Don’t you just hate when that happens? The interim fridge supplied by the local retailer was woefully small but would have to do for a few weeks until the one on order arrived. Too bad we have lots of family visiting on the weekend. Inspired by the email, I am nonetheless determined to commune with the nearest forest all week long, to spend some precious quality time inhaling cedar, and gazing at the canopy. It seems fitting to give thanks on my daily woodland immersions. Back to the task at hand. Google supplied a few ideas on how to best prepare and serve up a pig heart. I thought back to the day in late spring when I was dismayed by the meat still available from our local organic farmer and decided I would embark on a new taste adventure. Now, however, I thought back on the days when giblets were automatically included in your store-bought chicken or turkey and it was important to remember to remove rather than bake them in their plastic gullet wraps. The comparatively small hearts were sliced thin, added to the carcass soup and were a tough muscular chew next to the tender liver. I am very concerned about the state of things was the preeminent message of a talk I gave on trees to the L&A Horticultural Society this spring, befittingly the International Day of Forests. On this particular spring equinox, the Whistler Cork Oak Tree in Portugal was declared winner of the European Tree of the Year 2018 (treeoftheyear.org), which showcases trees with fascinating stories, unlike Big Tree competitions the world over where size is everything. Many old growth trees undergo preservation work, support structures, or are cordoned off. In Kingston I recently stumbled upon an old growth grove of maples with enormous girths and plenty of large, fallen limbs in an out of the way place. I want to tell you about sustainable pruning, old methods still used in many parts of the world such as coppicing and pollarding. About Prince Edward County’s advocacy group “Tree the County.” In Toronto, the non-profit LEAF (Local Enhancement and Appreciation of Forests) is another positive action organization. When townships put the man-made infrastructure in competition with the green infrastructure, it’s

invariably the green infrastructure that suffers – the de facto policy is to chop down trees rather than trim them or to analyze other options that maintain the trees’ integrity. The cost and inconvenience of temporarily shutting hydro power factors in, while replacement trees are very young and often unsustainable or alien species. The yellow bowl marinating meat takes up too much room in the lilliputian fridge. Joining the pig heart are some rescued venison steaks and roast. Rosemary, parsley, thyme, and coarse sea salt infuse. I am reminded of the deer crossing the roads on my way to the retreat. A porcupine too, and many little jumping frogs while the wind whipped the trees and rain pelted in the dusk. I want to tell you about tree culture among First Nation people in Canada. How sometimes trees were modified, bent, twisted, to mark trails, food caches, caves, and burial sites. Adorned trees wrapped with colorful cloths, or fallen ones ingrained with coins, traditions the world over, from Celtic pagan British Isles to parts of Africa, the Middle East, and East Asia. Trees are revered in many ancient cultures around the world, and offerings left in or below specials trees (called Holy Trees, Prayer Trees, Wishing Trees, Peace Trees, etc.) represent different beliefs and religions. In several Native American traditions, “prayer ties” are created in a ritual manner and left in particular sacred spots, or else in places made sacred by a personal or community ceremony. These are made of strips of coloured cloth, either red (representing the Red Road of indigenous spirituality) or the four colors of the four directions (the exact colors varying from tribe to tribe), with a pinch of tobacco or sacred herbs knotted in the cloth. Shivering aspens surrounding the Lennox & Addington Museum rustle enticingly, sounding a lot like waterfalls. In the center of the parking lot is a large mature maple I was told would have been planted at the turn of the last century. Nearby grow a half circle of white pines likely planted in the 1960s, I tell the touring group from Kingston, and also how the needles make a wonderful tea, historically recommended by First Nation Peoples to Europeans experiencing scurvy after long ship voyages and harsh winters. Underfoot, the Wood Wide Web mycelia reciprocate nourishment with the tree roots they envelop. All is connected. Tomorrow I will braise the heart, and the deer, remembering their loping across the darkened roads. I will notice more leaves turning color throughout the week, more on the forest floor. I will give thanks for sustenance, body, and soul. Family will visit. We will feast and walk the autumn trails.