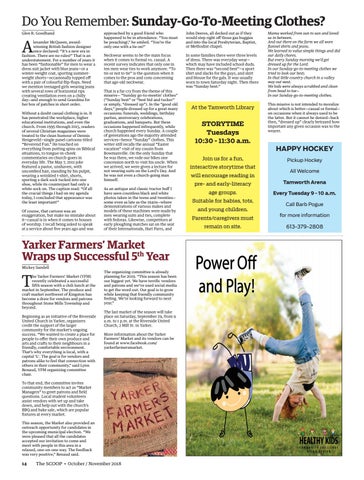 lexander McQueen, awardwinning British fashion designer once declared: “It’s a new era in fashion. There are no rules!” That is an understatement. For a number of years it has been “fashionable” for men to wear a dress suit jacket with blue jeans—or a winter-weight coat, sporting summerweight shorts—occasionally topped off with a pair of colourful flip-flops. Need we mention teenaged girls wearing jeans with several rows of horizontal rips creating ventilation even on a chilly day—and enough to send Grandma for her box of patches in short order. Without a doubt casual clothing is in. It has penetrated the workplace, higher educational institutions, and even the church. From 1995 through 2015, readers of several Christian magazines were treated to the clean humour of Dennis Hengeveld—single panel cartoons titled “Reverend Fun.” He touched on everything from putting spins on Biblical situations, to tongue-in-cheek commentaries on church-goers in everyday life. The May 7, 2011 joke featured a pastor, unshaven, with uncombed hair, standing by his pulpit, wearing a wrinkled t-shirt, shorts, sporting a dark sock tucked into one shoe, while its counterpart had only a white sock on. The caption read: “Of all the crucial things I had on my agenda today, I concluded that appearance was the least important!” Of course, that cartoon was an exaggeration, but make no mistake about it—casual is in when it comes to houses of worship. I recall being asked to speak at a service about five years ago and was

approached by a good friend who happened to be in attendance. “You must be preaching!,” he smiled. “You’re the only one with a tie on!”

John Deeres, all decked out as if they would step right off those gas buggies and into the local Presbyterian, Baptist, or Methodist chapel.

Neckwear seems to be the main focus when it comes to formal vs. casual. A recent survey indicates that only one in ten men wear ties to work anymore. “To tie or not to tie” is the question when it comes to the pros and cons concerning that age-old neckwear.

In some families there were three levels of dress. There was everyday wear— which may have included school duds. Then there was “second best”—a sport shirt and slacks for the guys, and skirt and blouse for the gals. It was usually worn to town Saturday night. Then there was “Sunday best:”

That is a far cry from the theme of this missive— “Sunday go-to-meetin’ clothes” (“Sunday best” or “best bid and tucker” or simply, “dressed up”). In the “good old days,” people dressed up for a great many occasions: funerals, weddings, birthday parties, anniversary celebrations, graduations, and banquets. But these occasions happened infrequently, while church happened every Sunday. A couple of generations ago the majority attended services—hence “Sunday” clothes. This writer still recalls the annual “Easter vacation” visit of my cousin from Bowmanville. On the only Sunday that he was there, we rode our bikes one concession north to visit his uncle. When we arrived, we were given a lecture for not wearing suits on the Lord’s Day. And he was not even a church-going man himself. As an antique and classic tractor buff I have seen countless black and white photos taken in the teens and twenties— some even as late as the 1940s—where demonstrations of various makes and models of these machines were made by men wearing suits and ties, complete with fedoras. Likewise, competitors at early ploughing matches sat on the seat of their Internationals, Hart Parrs, and

he Yarker Farmers’ Market (YFM) recently celebrated a successful fifth season with a chili lunch at the market in September. The produce and craft market northwest of Kingston has become a draw for vendors and patrons throughout Stone Mills Township and beyond. Beginning as an initiative of the Riverside United Church in Yarker, organizers credit the support of the larger community for the market’s ongoing success. “We wanted to create a place for people to offer their own produce and arts and crafts to their neighbours in a friendly, comfortable environment. That’s why everything is local, with a capital ‘L’. The goal is for vendors and patrons alike to feel that connection with others in their community,” said Lynn Renaud, YFM organizing committee chair.

The organizing committee is already planning for 2019. “This season has been our biggest yet. We have terrific vendors and patrons and we’ve used social media to get the word out. Our goal is to grow while keeping that friendly community feeling. We’re looking forward to next year.” The last market of the season will take place on Saturday, September 29, from 9 a.m. to 1 p.m. at the Riverside United Church, 2 Mill St. in Yarker. More information about the Yarker Farmers’ Market and its vendors can be found at www.facebook.com/ yarkerfarmersmarket.

To that end, the committee invites community members to act as “Market Managers” to greet patrons and field questions. Local student volunteers assist vendors with set up and take down, and help out with the church’s BBQ and bake sale, which are popular fixtures at every market. This season, the Market also provided an outreach opportunity for candidates in the upcoming municipal election. “We were pleased that all the candidates accepted our invitation to come and meet with people in this area in a relaxed, one-on-one way. The feedback was very positive,” Renaud said.

At the Tamworth Library

STORYTIME Tuesdays 10:30 - 11:30 a.m. Join us for a fun, interactive storytime that will encourage reading in

Mama worked from sun to sun and loved us in between. And out there on the farm we all wore flannel shirts and jeans. We learned to value simple things and did our daily chores. But every Sunday morning we’d get dressed up for the Lord. In our Sunday-go-to-meeting clothes we tried to look our best; In that little country church in a valley way out west. We kids were always scrubbed and clean from head to toe— In our Sunday-go-to-meeting clothes. This missive is not intended to moralize about which is better—casual or formal— on occasions when it always used to be the latter. But it cannot be denied—back then, “dressed up” clearly betrayed how important any given occasion was to the wearer.

Suitable for babies, tots, and young children. Parents/caregivers must remain on site.