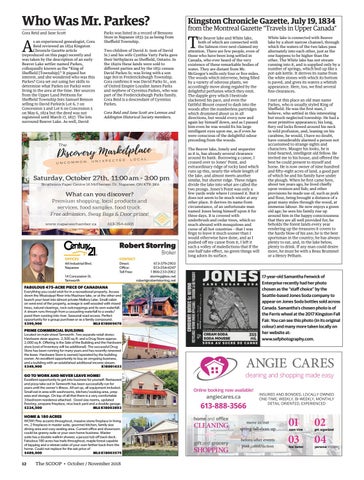 Who Was Mr. Parkes?

Parks was listed in a record of Bensons Store in Napanee 1833-34 as being from Sheffield Township.

s an experienced genealogist, Cora Reid reviewed an 1834 Kingston Chronicle Gazette article (reproduced on this page) recently and was taken by the description of an early Beaver Lake settler named Parkes, colloquially known as the “King of Sheffield [Township].” It piqued her interest, and she wondered who was this Parkes? Cora set out using her skills to determine what Parkes (or Parks) were living in the area at the time. Her sources from the Upper Land Petitions for Sheffield Township lists Samuel Benson selling to David Park(e)s Lot 6, 7 on Concession 3 and Lot 6 on Concession 5 on May 6, 1824 but the deed was not registered until March 17, 1837. The lots surround Beaver Lake. As well, David

Two children of David Jr. (son of David Sr.) and his wife Cynthia Varty Parks gave their birthplaces as Sheffield, Ontario. In the 1840s these lands were sold to different parties and by the 1851 census David Parkes Sr. was living with a son (age 80) in Fredericksburgh Township. Cora confirms it was David Parks Sr., son of United Empire Loyalist James Parks and nephew of Cyrenius Parkes, who was part of the Fredericksburgh Parks family. Cora Reid is a descendant of Cyrenius Parkes. Cora Reid and Jane Scott are Lennox and Addington Historical Society members.

Everything you could wish for in a recreational property. Access down the Mississippi River into Mazinaw lake, or at the other end launch your boat into almost private Mallory Lake. Small cabin on west end of the property, acreage is well wooded with mixed trees, natural clearings, rock outcroppings and its own waterfall. A stream runs through from a cascading waterfall to a swale/ pond then running into river. Seasonal road access. Perfect opportunity for a group purchase or as a family compound. $399,900 MLS K18005678

Located on main street Tamworth. Two separate retail stores: Hardware store approx. 2,500 sq.ft. and a Drug Store approx. 2,000 sq.ft. Offering is the Sale of the Building and the Hardware store (cost of Inventory will be additional). The successful Drug Store has been running for many years and has recently renewed the lease. Hardware Store is owned/operated by the building owner. An excellent opportunity to buy an on-going business, and a building with an established additional income stream. $349,900 K18001433

Excellent opportunity to get into business for yourself. Restaurant and pizza take out in Tamworth has been successfully run for years until the owner’s illness. All set up, all equipment included. Small eat in area with washrooms, kitchen/cooking area, prep area and storage. On top of all that there is a very comfortable 3-bedroom residence attached. Good size rooms, updated flooring, propane fireplace, nice back yard and a double garage. $224,500 MLS K18003893

WOW! Pine accents throughout, massive stone fireplace in living rm, 2 fireplaces in master suite, gourmet kitchen, family size dining area and cozy seating area. Current office and showroom could be granny suite or your own home business. Master suite has a double walk-in shower, a jacuzzi tub off back deck. Fabulous 180 acres has trails throughout, maple forest capable of tapping and a retreat cabin of your own farther back from the home. Could not replace for the ask price of $489,900 MLS K18003575

from the Montreal Gazette “Travels in Upper Canada”

he Beaver lake and White lake, both of which are connected with the Salmon river next claimed my attention. There are few people, even of those who have been long settled in Canada, who ever heard of the very existence of these remarkable bodies of water. They are distant from Mr. McGregor’s mills only four or five miles. The woods which intervene, being filled by a variety of odorous plants, we accordingly move along regaled by the delightful perfumes which they emit. The dapple grey which I bestrode slackened his pace, and even the faithful Blount ceased to dash into the woods after the numberless partridges which drummed about us in all directions, but would every now and again lay himself down, and as I passed him even he was would fix his large intelligent eyes upon me, as if even he were conscious of the delightful odour preceding from the woods.

The Beaver lake, lonely and sequester as it is, has already several clearance around its bank. Borrowing a canoe, I crossed over to Jones’ Point, and extraordinary ridge of rocky land which runs up this, nearly the whole length of the lake, and almost meets another similar, but shorter ridge. These ridges divide the lake into what are called the two prongs. Jones’s Point was only a few yards wide where I crossed it. But it does not seem to be much wider at any #6e7071 other place. It derives its name from circumstance, of an unfortunate man named Jones being himself upon it for three days. It is covered with underbrush and cedar trees, which so much abound with mosquitoes and #C92E85 curse of all hot countries – that I was feign to leave it much sooner than I would otherwise have done, and as I pushed off my canoe from it, I left it such a volley of maledictions that if the one half take effect, no green things will long adorn its surface.

White lake is connected with Beaver lake by a short narrow channel, through which the waters of the two lakes pass alternately into each other, just as the one happens to be higher than the other. The White lake has not stream running into it, and is supplied only by a number of springs, which boil up like a pot-ash kettle. It derives its name from the white stones with which its bottom is paved, and gives its waters a whitish appearance. Here, too, we find several fine clearances. I met at this place an old man name Parkes, who is usually styled King of Sheffield. He was the first man, I believe, who settled in this interesting but much neglected township. He had a most primitive appearance; his long, fiery red locks flowed around his neck in wild profusion, and, leaning on his carabine, he would, I have no doubt, have considerably alarmed a person not accustomed to strange sights and characters. Maugre his looks, he is kind-hearted, intelligent old fellow. He invited me to his house, and offered the best he could present to myself and horse. He is now owner of nine hundred and fifty-eight acres of land, a good part of which he and his family have under the plough. When he first came here, about ten years ago, he lived chiefly upon venison and fish; and other provisions he made use of, such as pork and flour, being brought a distance of a great many miles through the wood, at immense labour. He now enjoys a green old age; he sees his family rise up around him in the happy consciousness that they are all well provided for; he beholds the forest lands every year rendering up the treasures it covers to the hardy blow of his axe; he is the best sportsman in the country; he has always plenty to eat, and, in the lake below, plenty to drink. If any man could desire more, he must be with a Beau Brummel or a Henry Pelham.

17-year-old Samantha Fenwick of Enterprise recently had her photo chosen as the “staﬀ choice” by the Seattle-based Jones Soda company to appear on Jones Soda bottles sold across Canada. Samantha’s chosen photo is of the Ferris wheel at the 2017 Kingston Fall Fair. You can see this photo (in its original colour) and many more taken locally on her website at: www.sefphotography.com.