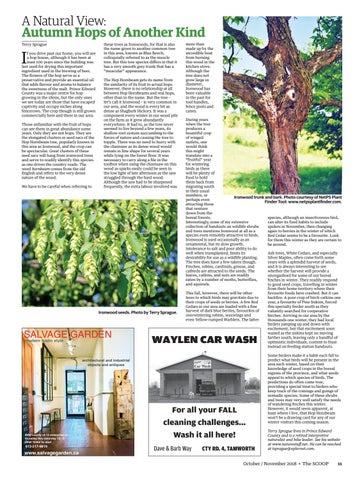 A Natural View: Autumn Hops of Another Kind Terry Sprague

f you drive past our home, you will see a hop house, although it has been at least 100 years since the building was last used for drying this important ingredient used in the brewing of beer. The flowers of the hop serve as a preservative and provide an essential oil that adds flavour and aroma to balance the sweetness of the malt. Prince Edward County was a major centre for hop growing in the 1800s, but the only ones we see today are those that have escaped captivity and occupy niches along fencerows. The crop though is still grown commercially here and there in our area. Those unfamiliar with the fruit of hops can see them in great abundance some years. Only they are not hops. They are the elongated clusters or seed sacs of the Hop Hornbeam tree, popularly known in this area as Ironwood, and the crop can be spectacular. Great clusters of these seed sacs will hang from ironwood trees and serve to readily identify this species as one drives the country roads. The word hornbeam comes from the old English and refers to the very dense nature of the wood. We have to be careful when referring to

these trees as Ironwoods, for that is also the name given to another common tree in this area, known as Blue Beech, colloquially referred to as the muscle tree. But this tree species differs in that it has a very smooth grey trunk that has a “muscular” appearance. The Hop Hornbeam gets its name from the similarity of its fruit to actual hops. However, there is no relationship at all between Hop Hornbeams and real hops, other than in the name. But the tree – let’s call it Ironwood – is very common in our area, and the wood is every bit as dense as Shagbark Hickory. It was a component every winter in our wood pile on the farm as it grew abundantly everywhere. It had to, as the tree never seemed to live beyond a few years, its shallow root system succumbing to the forces of nature and causing the tree to topple. There was no need to hurry with the chainsaw as its dense wood would remain in fine shape for several years while lying on the forest floor. It was necessary to carry along a file in the toolbox when using the chainsaw on this wood as sparks easily could be seen in the low light of late afternoon as the saw struggled through the hard wood. Although the saw had to be sharpened frequently, the extra labour involved was

more than made up by the incredible heat from burning this wood in the kitchen stove. Although the tree does not grow large in diameter, Ironwood has been valuable in the past for tool handles, fence posts and canes. During years when the tree produces a bountiful crop of winged nutlets, one would think this might translate into a “fruitful” year for wintering birds as there will be plenty of food to hold them back from migrating south in their usual numbers, or Ironwood trunk and bark. Photo courtesy of NetPS Plant perhaps even Finder Tool: www.netpsplantﬁnder.com. attracting those that venture down from the boreal forests. species, although an insectivorous bird, Interestingly, none of my extensive can alter its food habits to include collection of handouts on wildlife shrubs spiders in November, then changing and trees mentions Ironwood at all as a again to berries in the winter of which species even remotely attractive to birds. Red Cedar seems to be a favourite. Look Ironwood is used occasionally as an for them this winter as they are certain to ornamental, but its slow growth, be around. intolerance to salt and poor ability to do well when transplanted, limits its Ash trees, White Cedars, and especially desirability for use as a wildlife planting. Silver Maples, often come forth some The tree does have a few takers though. years with a splendid harvest of seeds, Finches, robins, cardinals, grouse, and and it is always interesting to see catbirds are attracted to the seeds. The whether the harvest will provide a leaves, catkins, and nuts are readily smorgasbord for some of our boreal eaten by a number of moths, butterflies, finches in winter. They readily respond and squirrels. to good seed crops, travelling in winter from their home territory where their This fall, however, there will be other favourite foods have crashed. But it can trees to which birds may gravitate due to backfire. A poor crop of birch catkins one their crops of seeds or berries. A few Red year, a favourite of Pine Siskins, forced Cedars in our area are loaded with a fine this specialty feeder south as they harvest of dark blue berries, favourites of valiantly searched for cooperative overwintering robins, waxwings and birches. Arriving in our area by the even Yellow-rumped Warblers. The latter thousands one winter, they had local birders jumping up and down with excitement, but that excitement soon waned as the siskins kept on moving farther south, leaving only a handful of optimistic individuals, content to feast instead on feeding station handouts.

For all your FALL cleaning challenges... Wash it all here! Dave & Barb Way

Some birders make it a habit each fall to predict what birds will be present in the area each winter, based on their knowledge of seed crops in the boreal regions of the province, and what seeds appeal to which species of birds. The predictions do often come true, providing a special treat to birders who keep track of the comings and goings of nomadic species. Some of these shrubs and trees may very well satisfy the needs of wandering finches this winter. However, it would seem apparent, at least where I live, that Hop Hornbeam won’t be a drawing card for any of our winter visitors this coming season. Terry Sprague lives in Prince Edward County and is a retired interpretive naturalist and hike leader. See his website at www.naturestuff.net. He can be reached at tsprague@xplornet.com.