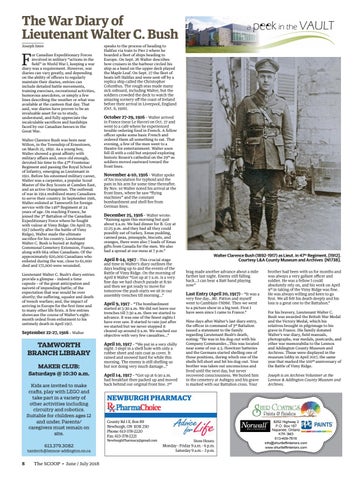 or Canadian Expeditionary Forces involved in military â&#x20AC;&#x153;actions in the fieldâ&#x20AC;? in World War I, keeping a war diary was a requirement. However, war diaries can vary greatly, and depending on the ability of officers to regularly maintain their diaries, entries can include detailed battle movements, training exercises, recreational activities, humorous anecdotes, or simply a few lines describing the weather or what was available at the canteen that day. That said, war diaries have proven to be an invaluable asset for us to study, understand, and fully appreciate the incalculable sacrifices and hardships faced by our Canadian heroes in the Great War.

Walter Clarence Bush was born near Wilton, in the Township of Ernestown, on March 25, 1892. As a young boy, Walter showed a great affinity with military affairs and, once old enough, devoted his time to the 47th Frontenac Regiment and passing the Royal School of Infantry, emerging as Lieutenant in 1911. Before his esteemed military career, Walter was a carpenter, a popular Scout Master of the Boy Scouts at Camden East, and an active Orangeman. The outbreak of war in 1914 mobilized many Canadians to serve their country. In September 1916, Walter enlisted at Tamworth for foreign service with the 146th Regiment at 24 years of age. On reaching France, he joined the 3rd Battalion of the Canadian Expeditionary Force where he fought with valour at Vimy Ridge. On April 29, 1917 (shortly after the battle of Vimy Ridge), Walter made the ultimate sacrifice for his country. Lieutenant Walter C. Bush is buried at Aubigny Communal Cemetery Extension, France, along with 664 other Canadians. Of the approximately 620,000 Canadians who enlisted during the war, close to 61,000 died and 172,000 were wounded. Lieutenant Walter C. Bushâ&#x20AC;&#x2122;s diary entries provide a glimpse â&#x20AC;&#x201C; indeed a time capsule â&#x20AC;&#x201C; of the great anticipation and naivetĂŠ of impending battle; of the expectation that war would be over shortly; the suffering, squalor and death of trench warfare; and, the impact of arriving in Europe for the first time and to many other life firsts. A few entries showcase the course of Walterâ&#x20AC;&#x2122;s eightmonth ordeal from enlistment to his untimely death in April 1917.

TAMWORTH BRANCH LIBRARY MAKER CLUB: Saturdays @ 10:30 a.m. Kids are invited to make crafts, play with LEGO and take part in a variety of other activities including circuitry and robotics. Suitable for children ages 12 and under. Parents/ caregivers must remain on site.

speaks to the process of heading to Halifax via train to Pier 2 where he boarded a fleet of ships heading to Europe. On Sept. 26 Walter describes how cruisers in the harbour circled his ship as a band on the upper deck played the Maple Leaf. On Sept. 27 the fleet of boats left Halifax and were sent off by a replica ship called the Christopher Columbus. The rough seas made many sick onboard, including Walter, but the soldiers crowded the deck to watch the amazing scenery off the coast of Ireland before their arrival in Liverpool, England (Oct. 6, 1916).

in France (near Le Havre) on Oct. 27 and went to a cafĂŠ where he experienced trouble ordering food in French. A fellow officer spoke some basic French and ordered them all something to eat. That evening, a few of the men went to a theatre for entertainment. Walter soon fell ill with a cold but enjoyed exploring historic Rouenâ&#x20AC;&#x2122;s cathedral on the 29th as soldiers moved eastward toward the front lines.

of his inoculation for typhoid and the pain in his arm for some time thereafter. By Nov. 10 Walter noted his arrival at the front lines, where he saw â&#x20AC;&#x153;flying machinesâ&#x20AC;? and the constant bombardment and shell fire from German lines.

â&#x20AC;&#x153;Raining again this morning but quit about 9 a.m. We had dinner for B. Coy at 12:25 p.m. and they had all they could possibly eat of turkey, Xmas pudding, canned peas, pineapple, biscuits, and oranges, there were also 7 loads of Xmas gifts from Canada for the men. We also had a spread at our mess at 7 p.m.â&#x20AC;? and time in Walterâ&#x20AC;&#x2122;s diary outlines the days leading up to and the events of the Battle of Vimy Ridge. On the morning of April 8 Walter â&#x20AC;&#x153;Got up at 7 a.m. is a very fine day we had church parade at 8:50 and then we got ready to move for tomorrow the push starts we sit in our assembly trenches till morningâ&#x20AC;Śâ&#x20AC;?

started at 5:30 a.m. We did not leave our trenches till 7:30 a.m. then we started to advance. It was one of the finest sights I have ever saw. It started to rain just after we started but we never stopped it cleared up around 9 a.m. We reached our objective with very few casualtiesâ&#x20AC;Śâ&#x20AC;?

had breakfast then packed up and moved back behind our original front line. 2nd

Nine days after Walterâ&#x20AC;&#x2122;s last diary entry, the officer in command of 3rd Battalion issued a statement to the family regarding Lieutenant Bushâ&#x20AC;&#x2122;s death, noting: â&#x20AC;&#x153;He was in his dug-out with his Company Commanderâ&#x20AC;ŚThis was located near some of our 4.5. Howitzer batteries and the Germans started shelling one of those positions, during which one of the shells fell short and hit his dug-out. Your brother was taken out unconscious and lived until the next day, but never recovered consciousness. We buried him in the cemetery at Aubigny and his grave is marked with our Battalion cross. Your

brother had been with us for months and was always a very gallant officer and soldier. He was a fellow I could absolutely rely on, and his work on April 9th in taking of the Vimy Ridge was fine. He was always willing and keen to go first. We all felt his death deeply and his loss is a great one to the Battalion.â&#x20AC;? For his bravery, Lieutenant Walter C. Bush was awarded the British War Medal and the Victory Medal, which his relatives brought in pilgrimage to his grave in France. His family donated Walterâ&#x20AC;&#x2122;s war diary, field manuals, photographs, war medals, postcards, and other war memorabilia to the Lennox and Addington County Museum and Archives. These were displayed in the museum lobby in April 2017, the same year that marked the 100th anniversary of the Battle of Vimy Ridge. Joseph is an Archives Volunteer at the Lennox & Addington County Museum and Archives.