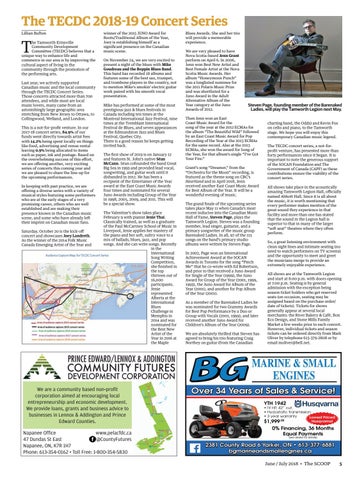 he Tamworth Erinsville Community Development Committee (TECDC) believes that a unique way to enhance life and commerce in our area is by improving the cultural aspect of living in the community through the promotion of the performing arts. Last year, we actively supported Canadian music and the local community through the TECDC Concert Series. Those concerts attracted more than 700 attendees, and while most are local music lovers, many came from an astonishingly large geographic area stretching from New Jersey to Ottawa, to Collingwood, Welland, and London. This is a not-for-profit venture. In our 2017-18 concert series, 84.9% of our funds went directly towards artist fees with 14.2% being spent locally on things like food, advertising and venue rental leaving 0.9% being allocated to items such as paper, ink and postage. Based on the overwhelming success of this effort, we are offering another, very exciting series of concerts this coming year and we are pleased to share the line-up for the upcoming performances. In keeping with past practice, we are offering a diverse series with a variety of musical styles featuring some performers who are at the early stages of a very promising career, others who are well established and are making their presence known in the Canadian music scene, and some who have already left their imprint on Canadian music fans. Saturday, October 20 is the kick-off concert and showcases Joey Landreth. As the winner of the 2014 Folk Music Canada Emerging Artist of the Year and

winner of the 2015 JUNO Award for Roots/Traditional Album of the Year, Joey is establishing himself as a significant presence on the Canadian music scene. On November 24, we are very excited to present a night of the blues with Mike Goudreau and the Boppin Blues Band. This band has recorded 18 albums and features some of the best sax, trumpet, and trombone players in the country, not to mention Mike’s smokin’ electric guitar work paired with his smooth vocal presentation. Mike has performed at some of the most prestigious jazz & blues festivals in Canada including ten times at the Montreal International Jazz Festival, nine times at the Tremblant International Festival de Blues, and seven appearances at the Edmundston Jazz and Blues Festival, Quebec City. There is a good reason he keeps getting invited back. The first show of 2019 is on January 12 and features St. John’s native Séan McCann. Séan cofounded the band Great Big Sea in 1993 and provided lead vocal, songwriting, and guitar work until it disbanded in 2012. He has been a recipient of the Entertainer of the Year award at the East Coast Music Awards four times and nominated for several Juno Awards including Group of the Year in 1998, 2005, 2009, and 2011. This will be a special show. The Valentine’s show takes place February 9 with pianist Jenie Thai. Classically trained, as well as a graduate of the Paul McCartney School of Music in Liverpool, Jenie applies her mastery of the piano and her soft, sultry voice to a mix of ballads, blues, jazz, and pop songs. And she can write songs. Recently in the International Song Writing Competition, she finished in the top thirteen out of 16,000 participants. Jenie represented Alberta at the International Blues Challenge in Memphis in 2014 and was nominated for the Best New Artist of the Year in 2016 at the Maple

Blues Awards. She and her trio will provide a memorable experience. We are very pleased to have Nova Scotia-based Jenn Grant perform on April 6. In 2006, Jenn won Best New Artist and Best Female Artist at the Nova Scotia Music Awards. Her album “Honeymoon Punch” was a longlisted nominee for the 2011 Polaris Music Prize and was shortlisted for a Juno Award in the Adult Alternative Album of the Year category at the Juno Awards of 2012.

Steven Page, founding member of the Barenaked Ladies, will play the Tamworth Legion next May.

Then Jenn won an East Coast Music Award for the song of the year at the 2012 ECMAs for the album “The Beautiful Wild” followed by an East Coast Music Award for Pop Recording of the Year at the 2013 ECMAs for the same record. Also at the 2013 ECMAs, she won the award for Song of the Year, for that album’s single “I’ve Got Your Fire.” Grant’s song “Dreamer,” from the “Orchestra for the Moon” recording, is featured as the theme song on CBC’s Heartland and in April 2018, Jenn received another East Coast Music Award for Best Album of the Year. It will be a wonderful evening of music. The grand finale of the upcoming series takes place May 11 when Canada’s most recent inductee into the Canadian Music Hall of Fame, Steven Page, plays the Tamworth Legion. Steven was a founding member, lead singer, guitarist, and a primary songwriter of the music group Barenaked Ladies. In all, 97 of the 113 songs on the band’s primary studio albums were written by Steven Page. In 2002, Page won an International Achievement Award at the SOCAN Awards in Toronto for the song “Pinch Me” that he co-wrote with Ed Robertson, and prior to that received a Juno Award for Single of the Year (1999), the Juno Award for Group of the Year (2001, 1999, 1993), the Juno Award for Album of the Year (2001), and another for Pop Album of the Year (2001). As a member of the Barenaked Ladies he was nominated for two Grammy Awards for Best Pop Performance by a Duo or Group with Vocals (2001, 1999), and later received another Juno Award for Children’s Album of the Year (2009). We are absolutely thrilled that Steven has agreed to bring his trio featuring Craig Northey on guitar (from the Canadian

charting band, the Odds) and Kevin Fox on cello and piano, to the Tamworth stage. We hope you will enjoy this contemporary Canadian music legend. The TECDC concert series, a not-forprofit venture, has presented more than forty performances since it began. It is important to note the generous support of the SOCAN Foundation and The Government of Canada (CAPF) as these contributions ensure the viability of the concert series. All shows take place in the acoustically amazing Tamworth Legion Hall, officially named Abbott Hall. Since it is all about the music, it is worth mentioning that every performer makes mention of the great sound they experience in that facility and more than one has stated that the sound in the Legion hall is superior to that in many of the larger “soft seat” theatres where they often perform. So, a great listening environment with clean sight lines and intimate seating (no need to watch performers on TV screens) and the opportunity to meet and greet the musicians merge to provide an extremely enjoyable experience. All shows are at the Tamworth Legion and start at 8:00 p.m. with doors opening at 7:00 p.m. Seating is by general admission with the exception being season ticket holders who get reserved seats (on occasion, seating may be assigned based on the purchase order/ date of tickets). Tickets for shows generally appear at several local merchants: the River Bakery & Café, Bon Eco Design, and Stone Mills Family Market a few weeks prior to each concert. However, individual tickets and season tickets can be ordered directly from Mark Oliver by telephone 613-379-2808 or by email moliver@bell.net.