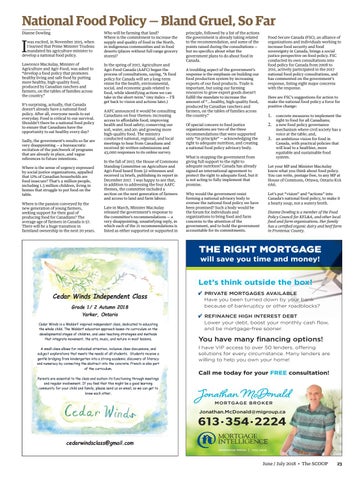 was excited, in November 2015, when I learned that Prime Minister Trudeau mandated his agriculture minister to develop a national food policy. Lawrence MacAulay, Minister of Agriculture and Agri-Food, was asked to “develop a food policy that promotes healthy living and safe food by putting more healthy, high-quality food, produced by Canadian ranchers and farmers, on the tables of families across the country.” It’s surprising, actually, that Canada doesn’t already have a national food policy. After all, everyone needs to eat everyday. Food is critical to our survival. Shouldn’t there be a national food policy to ensure that Canadians have the opportunity to eat healthy every day? Sadly, the government’s results so far are very disappointing — a bureaucratic recitation of the patchwork of programs that are already in place, and vague references to future intentions. Where is the sense of urgency expressed by social justice organizations, appalled that 12% of Canadian households are food insecure? That’s 4 million people, including 1.5 million children, living in homes that struggle to put food on the table. Where is the passion conveyed by the new generation of young farmers, seeking support for their goal of producing food for Canadians? The average age of farmers in Canada is 57. There will be a huge transition in farmland ownership in the next 20 years.

Who will be farming that land? Where is the commitment to increase the supply and quality of food in the North, in indigenous communities and in food deserts (places without full range grocery stores)? In the spring of 2017, Agriculture and Agri-Food Canada (AAFC) began the process of consultations, saying, “A food policy for Canada will set a long-term vision for the health, environmental, social, and economic goals related to food, while identifying actions we can take in the short-term.” (my italics — I’ll get back to vision and actions later.) AAFC announced it would be consulting Canadians on four themes: increasing access to affordable food; improving health and food safety; conserving our soil, water, and air; and growing more high-quality food. The ministry conducted national, regional, and local meetings to hear from Canadians and received 90 written submissions and 45,000 responses to its online survey. In the fall of 2017, the House of Commons Standing Committee on Agriculture and Agri-Food heard from 52 witnesses and received 14 briefs, publishing its report in December 2017. I was happy to see that, in addition to addressing the four AAFC themes, the committee included a section on the next generation of farmers and access to land and farm labour. Late in March, Minister MacAulay released the government’s response to the committee’s recommendations — a very disappointing, unsatisfying reply, in which each of the 21 recommendations is listed as either supported or supported in

principle, followed by a list of the actions the government is already taking related to the recommendation, and some of the points raised during the consultations — but no specifics about what the government plans to do about food in Canada.

Food Secure Canada (FSC), an alliance of organizations and individuals working to increase food security and food sovereignty in Canada, brings a social justice perspective on food policy. FSC conducted its own consultations into food policy for Canada from 2008 to 2011, actively participated in the 2017 national food policy consultations, and has commented on the government’s response, listing eight major concerns with the response.

A troubling aspect of the government’s response is the emphasis on building our food production system by increasing exports of our food products. Trade is important, but using our farming resources to grow export goods doesn’t fulfill the mandate to increase the amount of “...healthy, high-quality food, produced by Canadian ranchers and farmers, on the tables of families across the country.”

Here are FSC’s suggestions for action to make the national food policy a force for positive change:

Of special concern to food justice organizations are two of the three recommendations that were supported only “in principle” — acknowledging the right to adequate nutrition, and creating a national food policy advisory body.

concrete measures to implement the right to food for all Canadians; a new food policy governance mechanism where civil society has a voice at the table; and, an ambitious vision for food in Canada, with practical policies that will lead to a healthier, more equitable and sustainable food system.

Let your MP and Minister MacAulay know what you think about food policy. You can write, postage free, to any MP at House of Commons, Ottawa, Ontario K1A 0A6.

Why would the government resist forming a national advisory body to oversee the national food policy we have been promised? Such a body would be the forum for individuals and organizations to bring food and farm concerns to the attention of the government, and to hold the government accountable for its commitments.

Let’s put “vision” and “actions” into Canada’s national food policy, to make it a hearty soup, not a watery broth. Dianne Dowling is a member of the Food Policy Council for KFL&A, and other local food and farm organizations. Her family has a certiﬁed organic dairy and beef farm in Frontenac County.

Let’s think outside the box! Cedar Winds Independent Class Grade 1/ 2 Autumn 2018 Yarker, Ontario Cedar Winds is a Waldorf inspired independent class, dedicated to educating the whole child. The Waldorf education approach bases its curriculum on the developmental stages of children, and uses teaching strategies and methods that integrate movement, the arts, music, and nature in most lessons. A small class allows for individual attention, inclusive class discussions, and subject explorations that meets the needs of all students. Students receive a gentle bridging from kindergarten into a strong academic discovery of literacy and numeracy by connecting the abstract into the concrete. French is also part of the curriculum. Parents are essential to the class and sustain its functioning through meetings and regular involvement. If you feel that this might be a good learning community for your child and family, please send us an email, so we can get to know each other.