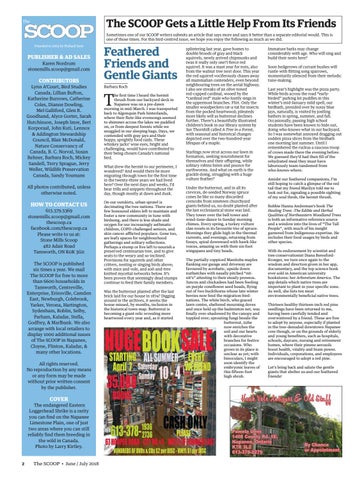 SCOOP Founded in 2005 by Richard Saxe

613.379.5369 stonemills.scoop@gmail.com thescoop.ca facebook.com/thescoop.ca Please write to us at: Stone Mills Scoop 482 Adair Road Tamworth, ON K0K 3G0 The SCOOP is published six times a year. We mail The SCOOP for free to more than 6600 households in Tamworth, Centreville, Enterprise, Erinsville, Camden East, Newburgh, Colebrook, Yarker, Verona, Hartington, Sydenham, Roblin, Selby, Parham, Kaladar, Stella, Godfrey, & Marlbank. We also arrange with local retailers to display 1000 additional issues of The SCOOP in Napanee, Cloyne, Flinton, Kaladar, & many other locations. All rights reserved. No reproduction by any means or any form may be made without prior written consent by the publisher.

The endangered Eastern Loggerhead Shrike is a rarity you can find on the Napanee Limestone Plain, one of just two areas where you can still reliably find them breeding in the wild in Canada. Photo by Larry Kirtley. 2

The SCOOP Gets a Little Help From Its Friends Sometimes one of our SCOOP writers submits an article that says more and says it better than a separate editorial would. This is one of those times. For this bird-centred issue, we hope you enjoy the following as much as we did.

he first time I heard the hermit thrush from our backyard deck in Napanee was on a pre-dawn morning in mid-March. I was transported back to Algonquin Park hinterlands, where their flute-like evensongs seemed to shimmer across the lakes we paddled on, or from deepest forests while we snuggled in our sleeping bags. Days, we contended with gray jays and their hoppy, sprightly food raids. These whiskey jacks’ wise eyes, bright and challenging, would have contributed to their being chosen Canada’s national bird. What drew the hermit to our perimeter, I wondered? And would there be more migrating through town for the first time in the twenty-three years we had lived here? Over the next days and weeks, I’d hear trills and snippets throughout the day, though mostly at dawn and dusk. On our outskirts, urban sprawl is decimating the tree nations. There are few honoured elders left to maintain and foster a new community in tune with birdsong, and there is less shade and oxygen for our increasingly asthmatic children, COPD-challenged seniors, and skin cancer-afflicted populace. Gone too, are leafy spaces for neighbourhood gatherings and solitary reflections. Perhaps a stump or five left to nourish a preserved centenarian tree, and to give seats to the weary and so-inclined. Provisions for squirrels and other critters, nesting or singing birds above; with mice and vole, and soil-and-tree knitted mycelial networks below. It’s been proven that seemingly dead stumps continue to feed their family members. Was the butternut planted after the last brick laid for our house in 1874? Digging around in the archives, it seems the house missed, by months, inclusion in the historical town map. Butternut is becoming a giant relic revealing more heartwood every year and, as it started

splintering last year, gave homes to double broods of gray and black squirrels, newly arrived chipmunks and (was it really only one?) fierce red squirrel. It was a mast year for nuts, also from the walnut tree next door. This year the red squirrel vociferously chases away all mammalian contenders, even beyond neighbouring trees on the aerial highway. I also see streaks of an olive-toned red-capped cardinal, wooed by the “cardinal red” male who lustily sings in the uppermost branches. Flirt. Only the smaller woodpeckers rat-a-tat for insects from the pocked heartwood; pileateds more likely will as butternut declines further. There’s a beautifully illustrated children’s book in our library system by Jan Thornhill called A Tree in a Forest, with seasonal and historical changes depicted over the two-hundred-year lifespan of a maple. Starlings now strut across our lawn in formation, seeking nourishment for themselves and their offspring, while solitary robins listen and pounce for earthworms. And what on earth is the grackle doing, struggling with a huge vulture feather? Under the butternut, and in all its crevices, de-seeded Norway spruce cones lie like so many discarded corncobs from nineteen churchyard giants behind us, no doubt planted after the last ecclesiastical stone was laid. They tower over the bell tower and wind-tune-dance to Sunday morning chimes. Every spring, a turkey vulture clan roosts in its favourite trio of spruce. Mornings they glide high in the thermal currents, and evenings, returning from forays, spiral downward with hawk-like voices, amazing us with their six-foot wingspans and tiny heads. The partially coppiced Manitoba maples flanking our garage and driveway are favoured by acrobatic, upside down nuthatches with nasally pitched “nitnit’s” attesting to their steady prowess. Juncos and chickadees had been feeding on purple coneflower seed heads, flying out of two buckthorns whose late winter berries now feed the migration-birdnations. The white birch, who graced lawn centre, sheltered mourning doves and once held up the badminton net, was finally over-shadowed by the canopy and toppled over; sprouting fungi beside the butternut, (s)he now enriches the soil and our hearts with decorative branches for festive occasions. Who grows in its place is unclear as yet; with binoculars, I might soon identify the embryonic leaves of this fifteen-foot high shrub.

Immature barks may change considerably with age. Who will sing and build their nests here? Soon hedgerows of currant bushes will rustle with flitting song sparrows, momentarily silenced from their melodic tune-making. Last year’s highlight was the pizza party. While birds across the road “earlybirded” parking lot puddles in this winter’s mid-January mild spell, our birdbath, presided over by noisy blue jays, naturally, is visited by jostling bathers in spring, summer, and fall. Occasionally, passing high school students have been known to hide out, doing who-knows-what in our backyard. So I was somewhat annoyed dragging out sodden pizza slices from the birdbath one morning last summer. Until I remembered the ruckus a raucous troop of crows made there the evening before. We guessed they’d had their fill of the rehydrated meal they must have laboriously team-tandemed from who-knows-where. Amidst our feathered companions, I’m still hoping to catch a glimpse of the red tail that my friend Marilyn told me to look out for, signaling a possible sighting of my soul throb, the hermit thrush. Robbie Hanna Anderman’s book The Healing Trees -The Edible and Herbal Qualities of Northeastern Woodland Trees is both an informative reference source and a window into the lives of “The Tall People”, with much of his insight garnered from Indigenous expertise. He includes their food usages by birds and other species. With its endorsement by scientist and tree conservationist Diana BeresfordKroeger, we turn once again to the wisdom and direction given in her app, documentary, and the top science book ever sold in American university bookstores: her Arboretum America. The app details which native trees are important to plant in your specific zone. As well, she lists ten most environmentally beneficial native trees. Thirteen healthy thirteen-inch red pine seedlings have been returned to me, having been carefully tended and overwintered by a friend. These are free to adopt by anyone, especially if planted in the tree-denuded downtown Napanee core though, or on the grounds of elderly and young benefiters, such as hospitals, schools, daycare, nursing and retirement homes, where their pinene aerosols boost health, vitality and brain power. Individuals, corporations, and employees are encouraged to adopt a red pine. Let’s bring back and salute the gentle giants that shelter us and our feathered friends!