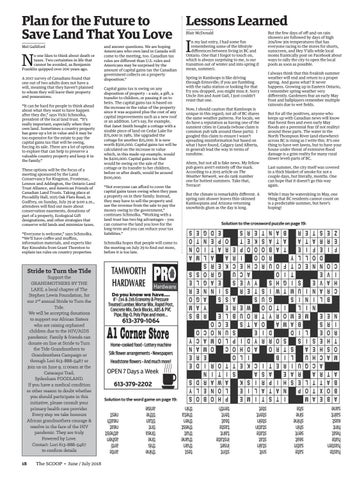 o one likes to think about death or taxes. Two certainties in life that cannot be avoided, as Benjamin Franklin quipped over 200 years ago. A 2017 survey of Canadians found that one out of two adults does not have a will, meaning that they haven’t planned to whom they will leave their property and possessions. “It can be hard for people to think ahead about what they want to have happen after they die,” says Vicki Schmolka, president of the local land trust. “It’s really important, especially when they own land. Sometimes a country property has gone up a lot in value and it may be too expensive for the estate to pay the capital gains tax that will be owing, forcing its sale. There are a lot of options to explore that can help to preserve a valuable country property and keep it in the family.” These options will be the focus of a meeting sponsored by the Land Conservancy for Kingston, Frontenac, Lennox and Addington, the Ontario Land Trust Alliance, and American Friends of Canadian Land Trusts. Taking place at Piccadilly Hall, 1025 Oak Flats Road, in Godfrey, on Sunday, July 29 at 9:00 a.m., attendees will find out more about conservation easements, donations of part of a property, Ecological Gift designations, and other strategies that conserve wild lands and minimize taxes. “Everyone is welcome,” says Schmolka. “We’ll have coffee and muffins, information materials, and experts like Ray Kinoshita from Grant Thornton to explain tax rules on country properties

and answer questions. We are hoping Americans who own land in Canada will come to the meeting, too. Canadian tax rules are different than U.S. rules and Americans may be surprised by the amount of capital gains tax the Canadian government collects on a property disposition.” Capital gains tax is owing on any disposition of property – a sale, a gift, a transfer to children, or passing it on to heirs. The capital gains tax is based on the increase in the value of the property since it was acquired plus the cost of any capital improvements such as a new roof or an addition. Let’s say, for example, that Janet Smith bought a cottage with a sizable piece of land on Cedar Lake for $75,000 in 1985. She upgraded the cottage for another $25,000. It is now worth $500,000. Capital gains tax will be calculated on the increase in value which, in this made-up example, would be $400,000. Capital gains tax that would be owing on the sale of the cottage or its transfer to her children, before or after death, would be around $100,000. “Not everyone can afford to cover the capital gains taxes owing when they pass a property on in their family. Instead, they may have to sell the property and use the revenue from the sale to pay the money owing to the government,” continues Schmolka. “Working with a land trust has two big advantages – you can conserve the land you love for the long-term and you can reduce your tax liabilities.” Schmolka hopes that people will come to the meeting on July 29 to find out more, before it is too late.

Stride to Turn the Tide

Support the GRANDMOTHERS BY THE LAKE, a local chapter of The Stephen Lewis Foundation, for our 2nd annual Stride to Turn the Tide. We will be accepting donations to support our African Sisters who are raising orphaned children due to the HIV/AIDS pandemic. Family & friends can donate on line at Stride to Turn the Tide Grandmothers to Grandmothers Campaign or through Lori 613-888-5467 or join us on June 9, 11:00am at the Cataraqui Trail, Sydenham FOODLAND. If you have a medical condition or other reason to doubt whether you should participate in this initiative, please consult your primary health care provider. Every step we take honours African grandmothers courage & resolve in the face of the HIV pandemic. They are truly Powered by Love. Contact: Lori 613-888-5467 to confirm details 18

n my last entry, I had some fun remembering some of the lifestyle differences between living in BC and Ontario. One that I forgot to touch on, which is always surprising to me, is our transition out of winter and into spring (I mean, summer). Spring in Kamloops is like driving through Erinsville; if you are fumbling with the radio station or looking for that fry you dropped, you might miss it. Sorry Uncle Jim and Aunt Gail, I just couldn’t resist that one. Now, I should caution that Kamloops is unique in this regard; not all of BC shares the same weather patterns. For locals, we do have a reputation as having one of the sunniest cities in Canada (whose claim is common pub talk around these parts). I googled this claim to ensure I wasn’t spreading misinformation but based on what I have found, Calgary (and Alberta, in general) lead the way in terms of sunshine. Ahem, but not all is fake news. My fellow pub goers aren’t entirely off the mark. According to a 2015 article on The Weather Network, we do rank number one for hottest summers. Take that, Terrace! But the climate is remarkably different. A spring rain shower leaves thin-skinned Kamloopians and Arizona-returning snowbirds glum as the day is long.

But the few days of off-and-on rain showers are followed by days of high 20s/low 30s temperatures that has everyone racing to the stores for shorts, sunscreen, and Hey Y’alls while local moms frantically post on Facebook about ways to rally the city to open the local pools as soon as possible. I always think that this freakish summer weather will end and return to a proper spring. And guess what? It never happens. Growing up in Eastern Ontario, I remember spring weather very differently. Gardeners fear an early May frost and ballplayers remember multiple rainouts due to wet fields. But for all the positives, anyone who keeps up with Canadian news will know that forest fires and even early May floods are a perennial fear (if not reality) around these parts. The water in the North Thompson River (and elsewhere) across BC is rising as I write this. It’s one thing to have wet lawns, but to have your house under threat of extensive flood damage is a grim reality for many rural (lower level) parts of BC. Last summer, the city itself was covered in a thick blanket of smoke for not a couple days, but literally, months. One can hope that it doesn’t go this way again. While I may be waterskiing in May, one thing that BC residents cannot count on is a predictable summer, but here’s hoping!

Solution to the crossword puzzle on page 19: