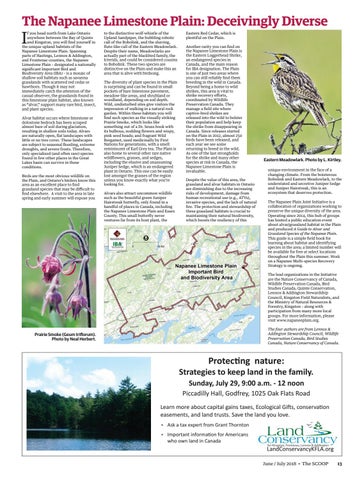 f you head north from Lake Ontario anywhere between the Bay of Quinte and Kingston, you will find yourself in the unique upland habitats of the Napanee Limestone Plain. Spanning parts of Hastings, Lennox & Addington, and Frontenac counties, the Napanee Limestone Plain – designated a nationally significant Important Bird and Biodiversity Area (IBA) – is a mosaic of shallow soil habitats such as savanna grasslands with scattered red cedar or hawthorn. Though it may not immediately catch the attention of the casual observer, the grasslands found in this limestone plain habitat, also known as “alvar,” support many rare bird, insect, and plant species. Alvar habitat occurs where limestone or dolostone bedrock has been scraped almost bare of soil during glaciation, resulting in shallow soils today. Alvars are naturally open, flat landscapes with little or no tree cover. These landscapes are subject to seasonal flooding, extreme droughts, and severe frosts. Therefore, only specialized (and often rare) species found in few other places in the Great Lakes basin can survive in these conditions. Birds are the most obvious wildlife on the Plain, and Ontario’s birders know this area as an excellent place to find grassland species that may be difficult to find elsewhere. A visit to the area in late spring and early summer will expose you

to the distinctive wolf-whistle of the Upland Sandpiper, the bubbling robotic call of the Bobolink, and the slurring, flute-like call of the Eastern Meadowlark. Despite their name, Meadowlarks are actually part of the blackbird family, the Icterids, and could be considered cousins to Bobolink. These two species are distinctive on the Plain and make this an area that is alive with birdsong. The diversity of plant species in the Plain is surprising and can be found in small pockets of bare limestone pavement, meadow-like areas, and shrubland or woodland, depending on soil depth. Wild, undisturbed sites give visitors the impression of walking in a natural rock garden. Within these habitats you will find such species as the visually striking Prairie Smoke, which looks like something out of a Dr. Seuss book with its bulbous, nodding flowers and wispy, pink seed heads; and fragrant Wild Bergamot, used medicinally by First Nations for generations, with a smell reminiscent of Earl Grey tea. The Plain is also home to several other rare native wildflowers, grasses, and sedges, including the elusive and unassuming Juniper Sedge, which is an endangered plant in Ontario. This one can be easily lost amongst the grasses of the region unless you know exactly what you’re looking for. Alvars also attract uncommon wildlife such as the beautiful green Juniper Hairstreak butterfly, only found in a handful of places in Canada, including the Napanee Limestone Plain and Essex County. This small butterfly never ventures far from its host plant, the

Eastern Red Cedar, which is plentiful on the Plain. Another rarity you can find on the Napanee Limestone Plain is the Eastern Loggerhead Shrike, an endangered species in Canada, and the main reason for IBA designation. The Plain is one of just two areas where you can still reliably find them breeding in the wild in Canada. Beyond being a home to wild shrikes, this area is vital to shrike recovery efforts, coordinated by Wildlife Preservation Canada. They manage a field site where captive-bred shrikes are released into the wild to bolster their population and help keep the shrike from disappearing in Canada. Since releases started on the Plain in 2012, almost 250 birds have been released, and each year we see some returning to breed in the wild. As one of the last strongholds for the shrike and many other species at risk in Canada, the Napanee Limestone Plain is invaluable. Despite the value of this area, the grassland and alvar habitats in Ontario are diminishing due to the increasing risks of development, damage from human recreational use (e.g., ATVs), invasive species, and the lack of natural fire. The protection and stewardship of these grassland habitats is crucial to maintaining their natural biodiversity, which boosts the resiliency of this

Eastern Meadowlark. Photo by L. Kirtley. unique environment in the face of a changing climate. From the boisterous Bobolink and Eastern Meadowlark, to the understated and secretive Juniper Sedge and Juniper Hairstreak, this is an ecosystem that deserves protection. The Napanee Plain Joint Initiative is a collaboration of organizations working to preserve the unique diversity of the area. Operating since 2014, this hub of groups has hosted a public education event about alvar/grassland habitat in the Plain and produced A Guide to Alvar and Grassland Species of the Napanee Plain. This guide is a simple field book for learning about habitat and identifying species in the area; a limited number will be available for free at select locations throughout the Plain this summer. Work on a Napanee Multi-species Recovery Strategy is ongoing. The lead organizations in the Initiative are the Nature Conservancy of Canada, Wildlife Preservation Canada, Bird Studies Canada, Quinte Conservation, Lennox & Addington Stewardship Council, Kingston Field Naturalists, and the Ministry of Natural Resources & Forestry, Kingston – along with participation from many more local groups. For more information, please visit www.napaneeplain.org. The four authors are from Lennox & Addington Stewardship Council, Wildlife Preservation Canada, Bird Studies Canada, Nature Conservancy of Canada.

Important informa�on for Americans who own land in Canada