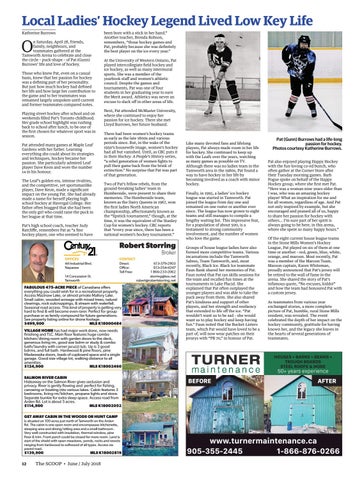 n Saturday, April 28, friends, family, neighbours, and teammates gathered at the Tamworth Arena to celebrate and close the circle – puck-shape – of Pat (Gunn) Burrows’ life and love of hockey. Those who knew Pat, even on a casual basis, knew that her passion for hockey was a defining part of her personality. But just how much hockey had defined her life and how large her contribution to the game and to her teammates was remained largely unspoken until current and former teammates compared notes. Playing street hockey after school and on weekends filled Pat’s Toronto childhood. Her grade school highlight was rushing back to school after lunch, to be one of the first chosen for whatever sport was in season. Pat attended many games at Maple Leaf Gardens with her father. Learning everything she could about its strategies and techniques, hockey became her passion. She particularly admired Leaf player Dave Keon and wore the number 14 in his honour. The Leaf’s golden era, intense rivalries, and the competitive, yet sportsmanlike player, Dave Keon, made a significant impact on the young Pat. She had already made a name for herself playing high school hockey at Havergal College. Her father often bragged that she had been the only girl who could raise the puck in her league at that time. Pat’s high school coach, teacher Judy Ratcliffe, remembers Pat as “a fine hockey player, one who seemed to have

been born with a stick in her hand.” Another teacher, Brenda Robson, remembers, “those hockey games and Pat, probably because she was definitely the best player on the ice every year.” At the University of Western Ontario, Pat played intercollegiate field hockey and ice hockey, as well as many intermural sports. She was a member of the yearbook staff and women’s athletic council. Despite the games and tournaments, Pat was one of four students in her graduating year to earn the Merit award. Athletics was never an excuse to slack off in other areas of life. Next, Pat attended McMaster University, where she continued to enjoy her passion for ice hockey. There she met Lloyd Burrows, her future husband. There had been women’s hockey teams as early as the late 1800s and various periods since. But, in the wake of the 1950’s housewife image, women’s hockey had all but vanished. Until, as CBC puts it in their Hockey: A People’s History series, “a rebel generation of women fights to pull their game back from the brink of extinction.” No surprise that Pat was part of that generation. Two of Pat’s fellow rebels, from the ground-breaking ladies’ team in Humberside, were present to share their memories. The Humberside team, known as the Dairy Queens in 1967, won the first ladies North American championship, affectionately known as the “lipstick tournament,” though, at the time, it was the equivalent of the Stanley Cup for women’s hockey. CBC reports that “every year since, there has been a national women’s hockey tournament.”

Like many devoted fans and lifelong players, Pat always made room in her life for hockey. She continued to keep up with the Leafs over the years, watching as many games as possible on TV. Although there was no ladies team in the Tamworth area in the 1980s, Pat found a way to have hockey in her life by becoming involved as a coach with minor hockey. Finally, in 1995, a ladies’ ice hockey league was started in Tamworth. Pat joined the league from day one and remained on one roster or another ever since. The league has now grown to eight teams and still manages to compile a lengthy waiting list. This impressive feat, for a population of about 500, is a testament to strong community involvement, and the number of women who love the game. Groups of house league ladies have also formed more competitive teams. Various incarnations include the Tamworth Sabres, Team Tamworth, and, most recently, Black Ice. Black Ice teammate Faun Bank shared her memories of Pat. Faun noted that Pat ran skills sessions for the team and recalled fun times at the tournaments in Lake Placid. She explained that Pat often outplayed the younger players and was able to take the puck away from them. She also shared Pat’s kindness and support of other players, and her strength and resiliency that extended to life off the ice. “Pat wouldn’t want us to be sad – she would want us to play hockey and keep having fun.” Faun noted that the Bucket-Listers team, which Pat would have loved to be a part of, will now wear patches on their jerseys with “PB 70,” in honour of Pat.

Pat (Gunn) Burrows had a life-long passion for hockey. Photos courtesy Katherine Burrows. Pat also enjoyed playing Happy Hockey with the fun-loving co-ed bunch, who often gather at the Corner Store after their Tuesday morning games. Barb Pogue spoke on behalf of the Happy Hockey group, where she first met Pat. “Here was a woman nine years older than I was, who was an amazing hockey player! What an inspiration for me and for all women, regardless of age. And Pat not only inspired by example, but she encouraged and praised all of us, happy to share her passion for hockey with others… I’m sure part of her spirit is always going to be here, in this arena, where she spent so many happy hours.” Of the eight current house league teams in the Stone Mills Women’s Hockey League, Pat played on six of them at one time or another – red, green, blue, white, orange, and maroon. Most recently, Pat was a member of the Maroon Team. Maroon captain, Karen Whiteman, proudly announced that Pat’s jersey will be retired to the wall of fame in the arena. She shared the story of Pat’s infamous quote, “No excuses, kiddo!” and how the team had honoured Pat with a custom jersey. As teammates from various year exchanged stories, a more complete picture of Pat, humble, rural Stone Mills resident, was revealed. The event celebrated the depth of her impact on the hockey community, gratitude for having known her, and the legacy she leaves in the hearts of several generations of teammates.

GET AWAY CABIN IN THE WOODS OR HUNT CAMP

is situated on 100 acres just north of Tamworth on the Arden Rd. The cabin is one open room and encompasses kitchenette, sleeping area and dining/sitting area and a small bathroom . Very well constructed with insulation, thermal window, pine floor & trim. Front porch could be closed for more room. Land is start of the shield with open meadows, ponds, rocks and woods ranging from hardwood to softwood of all types. Access via paved road.