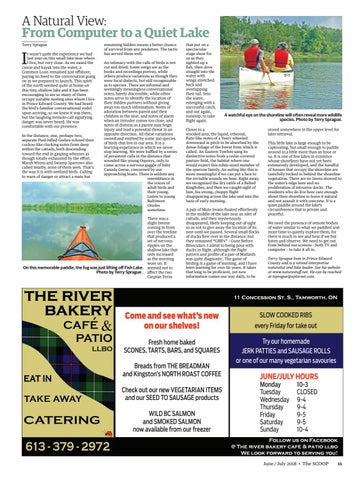 A Natural View: From Computer to a Quiet Lake Terry Sprague

t wasn’t quite the experience we had last year on this small lake near where I live, but very close. As we eased the canoe and kayak into the water, a Common Loon remained just offshore, paying no heed to the conversation going on as we prepared to launch. This spirit of the north seemed quite at home on this tiny, shallow lake and it has been encouraging to see so many of them occupy suitable nesting sites where I live in Prince Edward County. We had heard the bird’s familiar conversational yodel upon arriving, so we knew it was there, but the laughing tremolo call signifying danger was never heard. He was comfortable with our presence. In the distance, one, perhaps two, separate Pied-billed Grebes echoed their cuckoo-like clucking notes from deep within the cattails, both descending toward the end in gasping wheezes as though totally exhausted by the effort. Marsh Wrens and Swamp Sparrows also called nearby, none of them seen. That’s the way it is with wetland birds. Calling to warn of danger or attract a mate but

remaining hidden means a better chance of survival from any predators. The tactic has served them well. An intimacy with the calls of birds is not cut and dried. Some songs are as the books and recordings portray, while others produce variations as though they were local dialects, but still recognizable as to species. There are informal and seemingly meaningless conversational notes, barely discernible, while other notes serve to identify the location of their hidden partners without giving away too much information. Notes of adoration between parent and their children in the nest, and notes of alarm when an intruder comes too close, and notes of distress as a parent may feign injury and lead a potential threat in an opposite direction. All these variations owned and emitted by some 350 species of birds that live in our area. It is a learning experience in which we never stop learning. We were baffled by a series of persistent calls in the distance that sounded like young Ospreys, only to come across a nervous gaggle of baby Canada Geese, concerned by our approaching boats. There is seldom any resemblance in the voices of adult birds and their young. Listen to young Baltimore Orioles sometime.

On this memorable paddle, the fog was just lifting off Fish Lake. Photo by Terry Sprague .

There was a slight breeze coming in from over the treeline that produced a set of nervous ripples on the shallow lake that only increased as the morning wore on. It seemed not to affect the two Caspian Terns

that put on a spectacular stage show for us as they sighted up a fish, then dove straight into the water with wings stretched back and overlapping their tail. Into the water, emerging with a successful catch, and out again, nonstop, to take flight again.

A watchful eye on the shoreline will often reveal more wildlife species. Photo by Terry Sprague.

Closer to a wooded area, the liquid, ethereal, flute-like notes of a Veery wheeled downward in pitch to be absorbed by the dense foliage of the forest from which it called. An Eastern Towhee sang its distinctive notes from a cedar-covered pasture field, the habitat where one would expect this robin-sized member of the sparrow family. An outing like this is more meaningful if we can put a face to the invisible sounds we hear. Right away, we recognized the dry rattle of a Belted Kingfisher, and then we caught sight of him, his strong, choppy flight disappearing across the lake and into the haze of early morning. A pair of Mute Swans floated effortlessly in the middle of the lake near an islet of cattails, and then mysteriously disappeared, likely keeping out of sight so as not to give away the location of its nest until we passed. Several small flocks of ducks flew over in the distance, but they remained “GBB’s” – Gone Before Binoculars. I admit to being poor with ducks in flight, although the flight pattern and profile of a pair of Mallards was quite diagnostic. The game of birding is a game of learning, and I have been learning for over 60 years. It takes that long to be proficient, yet new information comes our way daily, to be

stored somewhere in the upper level for later retrieval. This little lake is large enough to be captivating, but small enough to paddle around in a little more than an hour or so. It is one of few lakes in existence whose shorelines have not yet been extensively developed, and the handful of houses that occupy the shoreline are tastefully tucked in behind the shoreline vegetation. There are no lawns mowed to the water’s edge here and no proliferation of intrusive docks. The residents who do live here care enough about their shoreline to leave it natural and not assault it with concrete. It is a quiet paddle around the lake’s circumference that is private and peaceful. We need the presence of remote bodies of water similar to what we paddled and more time to quietly explore them, for there is much to see and hear if we but listen and observe. We need to get out from behind our screens – both TV and computer – to take it all in. Terry Sprague lives in Prince Edward County and is a retired interpretive naturalist and hike leader. See his website at www.naturestuff.net. He can be reached at tsprague@xplornet.com.

Come and see what’s new on our shelves! Fresh home baked SCONES, TARTS, BARS, and SQUARES Breads from THE BREADMAN and Kingston’s NORTH ROAST COFFEE Check out our new VEGETARIAN ITEMS and our SEED TO SAUSAGE products WILD BC SALMON and SMOKED SALMON now available from our freezer

Follow us on Facebook @ The river bakery café & patio llbo We look forward to serving you! June / July 2018 • The SCOOP