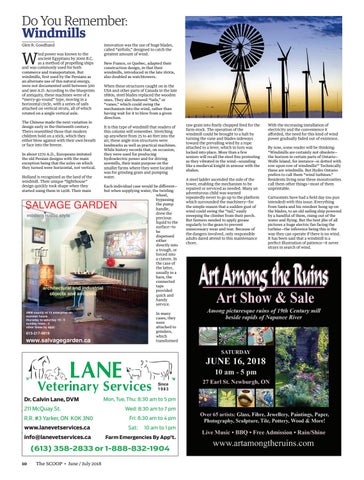 ind power was known to the ancient Egyptians by 2000 B.C. as a method of propelling ships and was commonly used for both commerce and transportation. But windmills, first used by the Persians as an alternate use of this natural energy, were not documented until between 500 and 900 A.D. According to the blueprints of antiquity, these machines were of a “merry-go-round” type, moving in a horizontal circle, with a series of sails attached on vertical struts, all of which rotated on a single vertical axle. The Chinese made the next variation in design early in the thirteenth century. Theirs resembled those that modern children hold on a stick, which they either blow against with their own breath or face into the breeze. In about 1270 A.D., Europeans imitated the old Persian designs with the main exception being that the axles on which they turned were horizontal, not vertical. Holland is recognized as the land of the windmill. Their unique “lighthouse” design quickly took shape when they started using them in 1408. Their main

innovation was the use of huge blades, called “airfoils,” designed to catch the greatest amount of wind. New France, or Quebec, adapted their construction design, in that their windmills, introduced in the late 1600s, also doubled as watchtowers. When these structures caught on in the USA and other parts of Canada in the late 1880s, steel blades replaced the wooden ones. They also featured “tails,” or “vanes,” which could swing the mechanism into the wind, rather than having wait for it to blow from a given direction. It is this type of windmill that readers of this column will remember. Stretching up anywhere from 25 to 40 feet into the air, these angle iron structures were landmarks as well as practical machines. While history records that, on occasion, they were used for producing hydroelectric power and for driving sawmills, their main purpose on the smaller farms where they were located was for grinding grain and pumping water. Each individual case would be different— but when supplying water, the twirling wheel, bypassing the pump handle, drew the precious liquid to the surface—to be dispensed either directly into a trough, or forced into a cistern. In the case of the latter, usually in a barn, the connected taps provided quick and handy service.

raw grain into finely chopped feed for the farm stock. The operation of the windmill could be brought to a halt by turning the vane and blades sideways toward the prevailing wind by a rope attached to a lever, which in turn was locked into place. More than a few seniors will recall the steel fins protesting as they vibrated in the wind—sounding like a medieval knight in armour with the shakes. A steel ladder ascended the side of the tower, enabling the mechanism to be repaired or serviced as needed. Many an adventurous child was warned repeatedly never to go up to the platform which surrounded the machinery—for the simple reason that a sudden gust of wind could swing the “tail,” easily sweeping the climber from their perch. But farmers needed to apply grease regularly to the gears to prevent unnecessary wear and tear. Because of the dangers involved, only responsible adults dared attend to this maintenance chore.

In many cases, they were attached to grinders, which transformed

With the increasing installation of electricity and the convenience it afforded, the need for this kind of wind power gradually faded out of existence. By now, some reader will be thinking: “Windmills are certainly not obsolete— the horizon in certain parts of Ontario— Wolfe Island, for instance—is dotted with row upon row of windmills!” Technically these are windmills. But Hydro Ontario prefers to call them “wind turbines.” Residents living near these monstrosities call them other things—most of them unprintable. Cartoonists have had a field day (no pun intended) with this issue. Everything from Santa and his reindeer hung up on the blades, to an old sailing ship powered by a handful of them, rising out of the water and flying. But the best jibe of all pictures a huge electric fan facing the turbine—the inference being this is the way they can operate if there is no wind. It has been said that a windmill is a perfect illustration of patience—it never strays in search of wind.