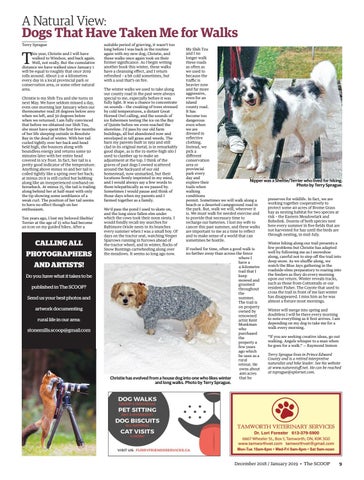 A Natural View: Dogs That Have Taken Me for Walks Terry Sprague

his year, Christie and I will have walked to Windsor, and back again. Well, not really. But the cumulative distance we have walked since January 1 will be equal to roughly that once 2019 rolls around. About 3 or 4 kilometres every day in a local provincial park or conservation area, or some other natural area. Christie is my Shih Tzu and she turns 10 next May. We have seldom missed a day, even one morning last January when our thermometer read 28 degrees below zero when we left, and 30 degrees below when we returned. I am fully convinced that before we obtained our Shih Tzu, she must have spent the first few months of her life sleeping outside in Resolute Bay in the dead of winter. With her tail curled tightly over her back and head held high, she bounces along with boundless energy and returns some 50 minutes later with her entire head covered in icy frost. In fact, her tail is a pretty good indicator of the temperature. Anything above minus 10 and her tail is coiled tightly like a spring over her back; at minus 20 it is still curled but bobbing along like an inexperienced cowhand on horseback. At minus 25, the tail is trailing along behind her at half-mast with only the tip showing some semblance of a weak curl. The position of her tail seems to have no effect though on her enthusiasm. Ten years ago, I lost my beloved Sheltie/ Terrier at the age of 15 who had become an icon on my guided hikes. After a

CALLING ALL PHOTOGRAPHERS AND ARTISTS! Do you have what it takes to be published in The SCOOP? Send us your best photos and artwork documenting rural life in our area: stonemills.scoop@gmail.com

suitable period of grieving, it wasn’t too long before I was back in the routine again with my new dog, Christie, and these walks once again took on their former significance. As I begin writing another book this winter, these walks have a cleansing effect, and I return refreshed – a bit cold sometimes, but with a soul that’s on fire. The winter walks we used to take along our county road in the past were always special to me, especially before it was fully light. It was a chance to concentrate on sounds – the creaking of trees stressed by cold temperatures, a distant Great Horned Owl calling, and the sounds of ice fishermen testing the ice on the Bay of Quinte before we even reached the shoreline. I’d pass by our old farm buildings, all but abandoned now and enveloped in tall grass and weeds. The barn my parents built in 1951 and still clad in its original metal, is in remarkably good shape, as is the 15-metre-high silo I used to clamber up to make an adjustment at the top. I think of the graves of past dogs I owned scattered around the backyard of our old homestead, now unmarked, but their locations firmly imprinted in my mind, and I would always say a few words to them telepathically as we passed by. Sometimes I would pause and think of those days when my parents and I farmed together as a family. We’d pass the pond I used to skate on, and the long since fallen elm under which the cows took their noon siesta. I would fondly recall my searches for Baltimore Oriole nests in its branches every summer when I was a small boy. Of days on the tractor seat, watching Vesper Sparrows running in furrows ahead of the tractor wheel, and in winter, flocks of Snow Buntings cartwheeling along over the meadows. It seems so long ago now.

My Shih Tzu and I no longer walk these roads as often as we used to because the traffic is heavier now and far more aggressive, even for an island county road. It has become too dangerous even when we are dressed in reflective clothing. Instead, we pick a different conservation area or provincial park every day and Nipper was a Sheltie/Terrier who lived for hiking. explore their Photo by Terry Sprague. trails when walking conditions preserves for wildlife. In fact, we are permit. Sometimes we will walk along a working together cooperatively to beach or a deserted campground road in protect some 40 acres of Brome Grass the park. But, walk we will, wherever it hay as nesting habitat for two species at is. We must walk for needed exercise and risk – the Eastern Meadowlark and to provide that necessary time to Bobolink. Dozens of both species nest recharge our batteries. I lost my wife to here every summer in five fields that are cancer this past summer, and these walks not harvested for hay until the birds are are important to me as a time to reflect through nesting, in mid-July. and to make sense of a world that can sometimes be hostile.

If rushed for time, often a good walk is no farther away than across the fence where I have a 4-kilometre trail that I keep mowed and groomed throughout the summer. The trail is on property owned by renowned artist Kent Monkman who purchased the property a few years ago which he uses as a rural retreat. He owns about 400 acres that he Christie has evolved from a house dog into one who likes winter

Winter hiking along our trail presents a few problems but Christie has adapted well by following me as I snowshoe along, careful not to step off the trail into deep snow. As we shuﬄe along, we watch the Blue Jays gathering in the roadside elms preparatory to roaring into the feeders as they do every morning upon our return. Winter reveals tracks, such as those from Cottontails or our resident Fisher. The Coyote that used to cross the trail in front of me last winter has disappeared. I miss him as he was almost a fixture most mornings. Winter will merge into spring and doubtless I will be there every morning to note everything as it first arrives. I am depending on my dog to take me for a walk every morning. “If you are seeking creative ideas, go out walking. Angels whisper to a man when he goes for a walk.” — Raymond Inmon Terry Sprague lives in Prince Edward County and is a retired interpretive naturalist and hike leader. See his website at www.naturestuﬀ.net. He can be reached at tsprague@xplornet.com.