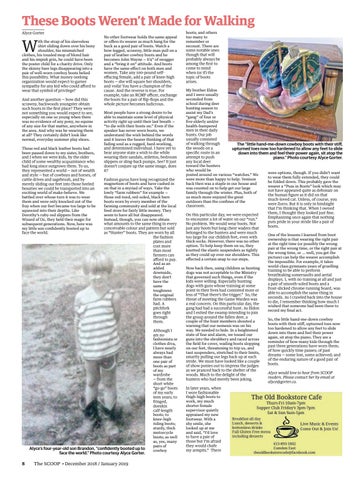 These Boots Weren’t Made for Walking Alyce Gorter

ith the strap of his sleeveless shirt sliding down over his bony shoulder, his mismatched clothes, his tousled mop of blond hair and his impish grin, he could have been the poster child for a charity drive. Only the skinny bare legs disappearing into a pair of well-worn cowboy boots belied this possibility. What money-seeking organization would expect to garner sympathy for any kid who could afford to wear that symbol of privilege? And another question — how did this scrawny, backwoods youngster obtain such boots in the first place? They were not something you would expect to see, especially on one so young when there was no evidence of any pony, no equine of any size for that matter, anywhere in the area. And why was he wearing them at all? They certainly didn’t look like normal, everyday summer play shoes. Those red and black leather boots had been passed down to my sister, brothers, and I when we were kids, by the older child of some wealthy acquaintance who had long since outgrown them. To us, they represented a world — not of wealth and style — but of cowboys and horses, of cattle drives and sagebrush, and by merely sliding our feet into those heeled beauties we could be transported into an exciting world of make-believe. We battled over whose turn it was to wear them and were only knocked out of the fray when our feet became too large to be squeezed into their depths. Like Dorothy’s ruby-red slippers from the Wizard of Oz, they held their magic for subsequent generations. Now, here was my little son confidently booted up to face the world.

No other footwear holds the same appeal or offers its wearer as much bang for the buck as a good pair of boots. Watch a bow-legged, scrawny, little man pull on a pair of leather cowboy boots and he becomes John Wayne — 6’4” of swagger and a “bring it on” attitude. And boots have the same effect on both men and women. Take any 100-pound selfeffacing female, add a pair of knee-high boots — she will square her shoulders, and voila! You have a champion of the cause. And the reverse is true. For example, take an RCMP officer, exchange the boots for a pair of flip-flops and the whole picture becomes ludicrous. Most people have a strong desire to be able to maintain some level of physical activity right up until their last breath — “to die with their boots on.” Even if the speaker has never worn boots, we understand the wish behind the words and it leaves the hearer thinking of that fading soul as a rugged, hard-working, and determined individual. I have yet to hear anyone state a wish to die while wearing their sandals, stilettos, bedroom slippers or sling-back pumps. See? It just doesn’t conjure up the same image, does it? Fashion gurus have long recognized the magnetism of boots and have cashed in on that in a myriad of ways. Take the lowly “farm rubbers” for example — those red-toed, red-soled, black barn boots worn by every member of the farming community and sold at the local feed store for fairly little money. They seem to have all but disappeared. Instead, though, you can now obtain what amounts to the same thing in every conceivable colour and pattern but sold as “Hunter” boots. They are worn by all the fashion plates and cost more than most farmers can afford to pay. And as an added downside, they don’t have the same toughness the original farm rubbers had. A pitchfork goes right through them.

Although I am no fashionista or clothes diva, I have nearly always had more than one pair of boots as part of my wardrobe — from the short white “go-go” boots of my early teen years; to fringed, doeskin calf-length boots; to knee-high riding boots; sturdy, thick motorcycle boots; as well as, yes, many pairs of cowboy

boots; and others too many to remember or recount. There are some notable ones though that will probably always be among the first to come to mind when (or if) the topic of boots arises. My brother Eldon and I were usually seconded from school during deer hunting season to assist my Dad’s “gang” of four or five elderly and/or health-hampered men in their daily hunts. Our job usually consisted of walking through The “little hand-me-down cowboy boots with their stiff, the woods on a upturned toes now too hardened to allow any feet to slide specific route in an down into them and feel their power again, sit atop the attempt to push piano.” Photo courtesy Alyce Gorter. any local deer toward the hunters who would be were options, though. If you didn’t want posted around on various “watches.” We to wear them fully extended, they could were more than happy to help. Venison be folded down. This probably gave the back then was a staple in our house and wearer a “Puss in Boots” look which may was counted on to help get our large not have appeared quite as debonair on family through the winter. Plus, both of the human figure as it did on that us much more enjoyed the great much-loved cat. Unless, of course, you outdoors than the confines of the were Zorro. But it is only in hindsight classroom. that I’m thinking that. When I owned them, I thought they looked just fine. On this particular day, we were expected Emphasizing once again that nothing to encounter a lot of water on our “run.” puts pride in your stride like a pair of No problem. We would wear boots. Not boots. just any boots but long chest waders that belonged to the hunters and were much One of the lessons I learned from boot too large for our childish feet, even with ownership is that wearing the right pair thick socks. However, there was no other at the right time (or possibly the wrong option. To help keep them on us, they pair at the wrong time, or the right pair at knotted the elastic suspenders as tightly the wrong time, or … well, you get the as they could up over our shoulders. This picture) can help the wearer accomplish effected a certain snap to our steps. the impossible. For example, it takes world-class gymnasts years of gruelling Now back then, using children as hunting training to be able to perform dogs was not acceptable to the Ministry breathtaking somersaults and aerial that governed such things, even if the displays. I, with no training at all and just kids were willing. Especially hunting a pair of smooth-soled boots and a dogs with guns whose training at some frost-slicked chrome running board, was point in their lives had consisted more or able to accomplish the same thing in less of “That there’s the trigger.” So, the seconds. As I crawled back into the house threat of meeting the Game Warden was to die, I remember thinking how much I a real concern. On this particular day, the wished that someone had been there to gang had had a successful hunt. As Eldon record my final act. and I exited the swamp intending to join the group around the fallen deer, a So, the little hand-me-down cowboy couple of the hunt members shouted a boots with their stiff, upturned toes now warning that our nemesis was on his too hardened to allow any feet to slide way. We needed to hide. In a heightened down into them and feel their power state of fear and alarm, we tossed our again, sit atop the piano. They are a guns into the shrubbery and raced across reminder of how many kids through the the field for cover, wading boots slopping past three generations have worn them; on our feet, threatening to trip us, and of how quickly time passes; of past taut suspenders, stretched to their limits, dreams — some lost, some achieved; and smartly pulling our legs back up at each of the enduring nature of a good pair of stride. We must have looked like a couple boots. of show ponies out to impress the judges as we pranced back to the shelter of the Alyce would love to hear from SCOOP woods. Much to the delight of the readers. Please contact her by email at hunters who had merely been joking. alyce@gorter.ca. In later years, when I wore fashionable thigh-high boots to work, my much shorter female supervisor quietly appraised my new footwear. With a shy smile, she looked up at me and said, “I’d love to have a pair of those but I’m afraid they would chafe my armpits.” There