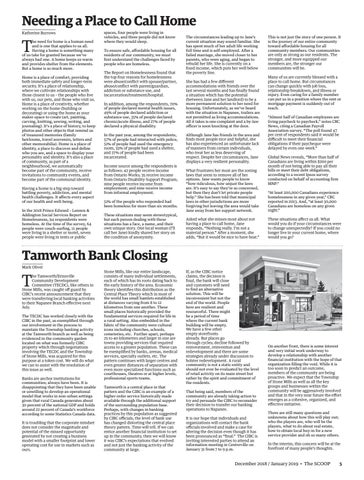 he need for home is a human need and is one that applies to us all. Having a home is something many of us take for granted because we’ve always had one. A home keeps us warm and provides shelter from the elements. But a home is so much more. Home is a place of comfort, providing both immediate safety and longer-term security. It’s a place of relationship, where we cultivate relationships with those closest to us – the people who live with us, our pets, and those who visit us. Home is a place of creativity, whether working on the home (building or decorating) or using the home as your maker-space to create (art, painting, carving, knitting, sewing, writing, and journaling). It’s a place of history, to keep photos and other objects that remind us of treasured memories (family heirlooms, travel souvenirs, letters and other memorabilia). Home is a place of identity, a place to discover and define who you are, and a space to display your personality and identity. It’s also a place of community, as part of a neighbourhood, we automatically become part of the community, receive invitations to community events, and become part of the communal identity. Having a home is a big step toward battling poverty, addiction, and mental health challenges. It affects every aspect of our health and well-being. In the 2018 Prince Edward – Lennox & Addington Social Services Report on Homelessness, 94 respondents were homeless. At the time of the survey, 64 people were couch-surfing, 11 people were living in a shelter or motel, seven people were living in tents or public

The circumstances leading up to Jane’s current situation may sound familiar. She has spent much of her adult life working full time and is self-employed. After a failed marriage, she moved closer to her parents, who were aging, and began to rebuild her life. She is currently on a fixed income, which puts her well below the poverty line. She has had a few different accommodations with friends over the last several months and has finally found a situation which has the potential (between Jane and her landlord) to be a more permanent solution to her need for housing. Unfortunately, as we’ve heard with the situation in Napanee, trailers are not permitted as living accommodations. All it takes is one complaint and a by-law officer is soon knocking at the door. Although Jane has friends in the area and finds most people nice and helpful, she has also experienced an unfortunate lack of manners from certain individuals, who treat her as less deserving of respect. Despite her circumstances, Jane displays a very resilient personality. What frustrates her most are the zoning laws that seem to remove all of her options. Jane wants people to know “how ridiculous, how unjust the laws are. It’s easy to say they’re so concerned, but then they don’t let private people help.” She has been told that municipal laws in other jurisdictions are more forgiving but leaving the area would take Jane away from her support network. Asked what she misses most about not having a place to call home, Jane responds, “Nothing really. I’m not a material person.” After a moment, she adds, “But it would be nice to have heat.”

This is not just the story of one person. It is the journey of our entire community toward affordable housing for all community members. Our communities are only as strong as our residents. The stronger, and more equipped our members are, the stronger our communities will be. Many of us are currently blessed with a place to call home. But circumstances can change quickly with job loss, relationship breakdown, and illness or injury. Even caring for a family member can put us in a position where the rent or mortgage payment is suddenly out of reach. “Almost half of Canadian employees are living paycheck to paycheck,” notes CBC News, citing a Canadian Payroll Association survey. “The poll found 47 per cent of respondents said it would be difficult to meet their financial obligations if their paycheque were delayed by even one week.” Global News reveals, “More than half of Canadians are living within $200 per month of not being able to pay all their bills or meet their debt obligations, according to a recent Ipsos survey conducted on behalf of accounting firm MNP.” “At least 200,000 Canadians experience homelessness in any given year,” CBC reported in 2013. And, “at least 30,000 Canadians are homeless on any given night.” These situations affect us all. What would you do if your circumstances were to change unexpectedly? If you could no longer live in your current home, where would you go?

he Tamworth/Erinsville Community Development Committee (TECDC), like others in Stone Mills, was caught off guard by CIBC’s recent announcement that they were transferring local banking activities to their Napanee Branch effective next July. The TECDC has worked closely with the CIBC in the past, as exemplified through our involvement in the process to maintain the Township banking activity at the Tamworth branch as well as being evidenced in the community garden located on what was formerly CIBC property which through negotiations involving the TECDC and the Township of Stone Mills, was acquired for this purpose at a token cost. We will do what we can to assist with the resolution of this issue as well. Banks are anchor institutions for communities; always have been. It is disappointing that they have been unable or unwilling to develop an operational model that works in non-urban settings given that rural Canada generates about 30 percent of the national GDP and holds around 22 percent of Canada’s workforce according to some Statistics Canada data. It is troubling that the corporate mindset does not consider the magnitude and potential of the missed opportunity generated by not creating a business model with a smaller footprint and lower operating cost for use in markets such as ours.

Stone Mills, like our entire landscape, consists of many individual settlements, each of which has its roots dating back to the early history of the area. Economic theory identifies this distribution as the Central Place Theory which in most of the world has small hamlets established at distances varying from 8 to 12 kilometres from one another. These small places historically provided the fundamental services required for life in a rural setting. Also embedded in the fabric of the community were cultural icons including churches, schools, cemeteries, etc. Further apart, perhaps 25 to 40 kilometres and larger in size are towns providing services that required access to a greater population. These can be exemplified by banks, arenas, medical services, specialty outlets, etc. The pattern continues with larger centres and even greater distances of separation with even more specialized functions such as courthouses, theatres or at higher levels, professional sports teams. Tamworth is a central place in that pattern and the CIBC is an example of a higher order service historically made available through the additional support of the surrounding population base. Perhaps, with changes in banking practices by this population as suggested by CIBC officials, the level of bank use has changed distorting the central place theory pattern. Time will tell. If we can entice another financial institution to set up in the community, then we will know it was CIBC’s expectations that evolved and not just the banking activity of the community at large.

If, as the CIBC notice claims, the decision is final, the bank will close and customers will need to find an alternative solution. This will be inconvenient but not the end of the world. People here are resilient and resourceful. There might be a period of time where the current bank building will be empty. We have a few other empty storefronts already. But places go through cycles; decline followed by reinvestment, reinvention and redevelopment and there are some strategies already under discussion to bolster redevelopment. A rural community is not a static entity and should not ever be evaluated by the level of retail activity on its main street but rather by the spirit and commitment of the residents. That being said, members of the community are already taking action to try and persuade the CIBC to reconsider their decision to transfer our banking operations to Napanee. It is our hope that individuals and organizations will contact the bank officials involved and make a case for altering the decision even though it has been pronounced as “final.” The CIBC is inviting interested parties to attend an information meeting in Centreville on January 31 from 7 to 9 p.m.

On another front, there is some interest and very initial work underway to develop a relationship with another financial institution with the hope of that organization filling the void. While it is too soon to predict an outcome, members of the community are being proactive. We expect that the Township of Stone Mills as well as all the key groups and businesses within the community will be aggressively involved and that in the very near future the effort emerges as a cohesive, organized, and effective initiative. There are still many questions and unknowns about how this will play out; who the players are, who will be the players, what to do about real estate, how to obtain local buy-in for a new service provider and oh so many others. In the interim, this concern will be at the forefront of many people’s thoughts.