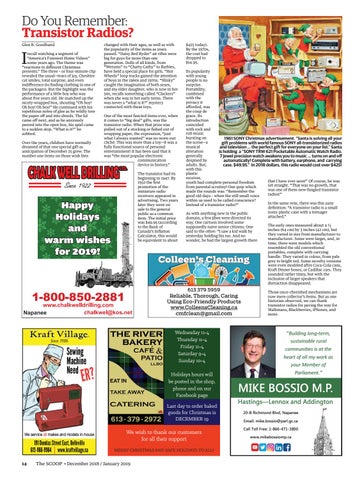 recall watching a segment of “America’s Funniest Home Videos” some years ago. The theme was “reactions to different Christmas presents.” The three – or four-minute clip revealed the usual—tears of joy, Cheshire cat smiles, total surprise, and even indifference (to finding clothing in one of the packages). But the highlight was the performance of a little boy who was about five years old. He snatched up the nicely-wrapped box, shouting “Oh boy! Oh boy! Oh boy!” He continued with his repetitious notes of glee as he wildly tore the paper off and into shreds. The lid came off next, and as he anxiously peered into the open box, his spiel came to a sudden stop. “What is it?” he sobbed. Over the years, children have normally dreamed of that one special gift as anticipation of December 25 grew. The number one items on those wish lists

changed with their ages, as well as with the popularity of the items as years passed. “Daisy Red Ryder” air rifles were big for guys for more than one generation. Dolls of all kinds, from “Wetums” to “Chatty Cathy” to Barbies, have held a special place for girls. “Hot Wheels” loop tracks gained the attention of boys in the 1960s and 1970s. “Slinky” caught the imagination of both sexes, and my elder daughter, who is now in her 50s, recalls something called “Clackers” when she was in her early teens. There was never a “what is it?” mystery connected with these toys. One of the most fancied items ever, when it comes to “big deal” gifts, was the transistor radio. When that prize was pulled out of a stocking or fished out of wrapping paper, the expression, “just what I always wanted” was no worn-out cliché. This was more than a toy—it was a fully functional source of personal entertainment! It has been said that it was “the most popular electronic communication device in history.” The transistor had its beginning in 1947. By 1952 the first promotion of the miniature radio receivers appeared in advertising. Two years later they went on sale to the general public as a common item. The initial price was $49.95 (according to the Bank of Canada’s Inflation Calculator, this would be equivalent to about

Happy Holidays and warm wishes for 2019!

$425 today). By the 1970s, the cost had dropped to $14.95. Its popularity with young people is no surprise. Portability, combined with the privacy it afforded, was the coup de grace. Its introduction coincided with rock and roll music bursting on 1961 SONY Christmas advertisement. “Santa is solving all your the scene—a gift problems with world famous SONY all-transistorized radios musical and television ... the perfect gift for everyone on your list.” Santa alteration is holding a “SONY TRW 621 Pocketable Automatic Watch Radio. generally 7 jewel precision watch awakens you to music ... turns on and off despised by automatically! Complete with battery, earphone, and carrying adults. But, case. $49.95.” In 2018 dollars, this radio would cost over $425! with this plastic receiver, that I have ever seen!” Of course, he was youth had complete personal freedom set straight. “That was no growth, that from parental scrutiny! One quip which was one of them new-fangled transistor made the rounds was: “Remember the radios!” good old days – when the still small voice within us used to be called conscience? Instead of a transistor radio?”

As with anything new in the public domain, a few jibes were directed its way. One cartoon involved some supposedly naive senior citizens. One said to the other: “I saw a kid walk by yesterday holding his ear. And no wonder, he had the largest growth there

Wednesday 11-4 Thursday 11-4 Friday 11-4 Saturday 9-4 Sunday 10-4 Holidays hours will be posted in the shop, phone and on our Facebook page Last day to order baked goods for Christmas is DECEMBER 19

We wish to thank our customers for all their support MERRY CHRISTMAS AND SAFE HOLIDAYS TO ALL! 14

In the same vein, there was this zany definition: “A transistor radio is a small noisy plastic case with a teenager attached.” The early ones measured about 4 ½ inches (64 cm) by 3 inches (42 cm), but they varied in size from manufacturer to manufacturer. Some were larger, and, in time, there were models which resembled the old conventional portables, complete with carrying handle. They varied in colour, from pale grey to bright red. Some novelty versions were even modeled after Coca-Cola cans, Kraft Dinner boxes, or Cadillac cars. They sounded rather tinny, but with the inclusion of larger speakers that distraction disappeared. Those once-cherished mechanisms are now mere collector’s items. But as one historian observed, we can thank transistor radios for paving the way for Walkmans, Blackberries, iPhones, and more.